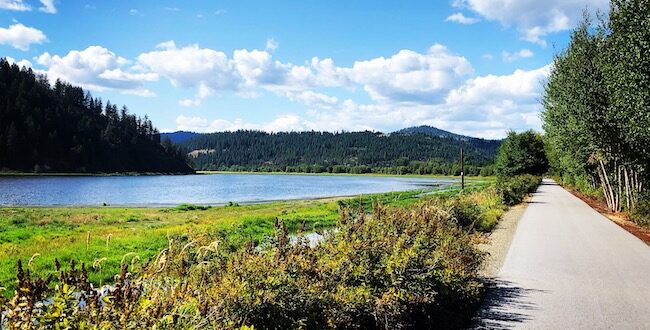 A 72-mile paved bike trail stretches across the Idaho Panhandle near the Couer d'Alene Indian Reservation all the way to near the Montana border. Photo by Tracy Simmons.

In Search Of Religious Freedom, Christians Flock To North Idaho

In Search Of Religious Freedom, Christians Flock To North Idaho

By Tracy Simmons |for SpokaneFāVS and Religion Unplugged

POST FALLS, Idaho— Rare was a yard without a Trump sign in the North Idaho neighborhood Dan Hegelund and his family moved to this summer.

And that’s exactly what they wanted.

About six months after opening a non-denominational church in Tacoma, Wash. the state implemented COVID-19 guidelines, restricting houses of worship from gathering in person.

He said his church followed the governor’s mandate because they were told it would only be for a few weeks and would help the hospitals from being overrun by COVID-19 patients.

As of mid-December, though, Pierce County was still under restrictions, which limits indoor worship services to 30 individuals, so long as 6 feet of physical distance can be achieved between households. It also requires face coverings for all participants indoors and prohibits choirs.

“Hindsight’s 20-20,” said Hegelund. “I think a lot of churches, if they had known that they were planning to shut us down, basically permanently, we would have never gone along with it. It wasn’t really about helping out the hospitals. It was about something else.”

So Hegelund closed his church and moved his family to Post Falls, Idaho, where he said religious freedom still remains.

His family, which includes his mother, 80-year-old Evangelist Linda Meissner of “The Cross and the Switchblade,” had visited Coeur d’Alene, Idaho earlier in the summer and after that knew Idaho was where they belonged.

The Hegelund family isn’t the only one fleeing Washington state in search of a place with less rigid COVID restrictions.

According to the U.S. Census, Idaho continues to be one of the fastest growing states. And Hegelund said, because of the pandemic, now it’s growing even faster.

He said he knows more people moving to Idaho than he knows people who have become seriously ill or died from COVID.

“If I was seeing people dying like flies in the streets, I probably would be willing to do anything,” he said. “But I have no personal experience of this COVID thing existing, I only have it based on what the media is telling me. I have a huge social network, hundreds of friends. I don’t know a single person who is affected by this in a severe manner.”

Realtor Kris Finch, who sells homes in both Washington and Idaho, said she’s seen a trend in families moving to the Gem State for religious or political reasons.

“I have had a handful of people wishing to move to the area. In fact, they had or have jobs in Washington, but wanted to purchase homes in Idaho to get away from the democratic politics of Washington,” she said, noting that rural properties seem to be in demand all across the state.

She also said in recent years she’s sold a home to an anti-vaccinations family from California and has heard from several Washington residents looking to move to a red (Republican-run) state.

“Even though they seemed to believe Idaho would turn blue in the future they felt that the laws were more in line with their views on weapons, required masks, etc, and wished to move to Idaho,” she said about a recent client.

Kory Martinelli, of Live Better in North Idaho Real Estate, said in a popular YouTube video that he moved his family to Coeur d’Alene from California in 2009 because he felt progressive politics were threatening, “our spiritual rights, our family values, our economic stability and our constitutional rights, especially the right to bear arms.”

He didn’t return calls or emails for this story, but in his video pointed to Gallup research that shows in 2018 Idaho was one of 19 states rated as highly conservative, meaning it has more conservatives than liberals by at least 20 percentage points and since 1990 Idaho has been the fourth fastest growing state.

Hegelund, who in addition to being a pastor has also been a choir director and vocal coach, is now working as an instructor at the Music Conservatory of Coeur d’Alene. His family is attending a megachurch in Post Falls, and he and his mother have launched a ministry in Spokane, Wash. called Jesus People Coffee House.

They said Spokane, which is about 30 minutes from their Idaho home, is their mission field.

“It’s a great location, right in the middle of the devil’s headquarters,” she said.

On Friday nights they welcome runaways, drug addicts and the homeless into the coffee house for music, coffee and donuts and prayer. Throughout the week they also engage in street evangelism in Spokane.

“We’re believing in God to change that atmosphere of darkness through Jesus Christ, to push that darkness out,” Meissner said.

To Hegelund and Meissner, the difference between Washington and Idaho is night and day, but they have hope that the rifts the country has seen in 2020 can be healed.

“I don’t think it’s healthy if our prayers have this flavor of a heavy cloud or a dark winter, as Joe Biden would say. So I try to focus on the immutable constants of God,” Hegelund said, “like God you have a good plan for our life, and for our nation’s life.”

Previous One Good Thing: Highlights of 9 months in tales of kindness
Next A good life remembered