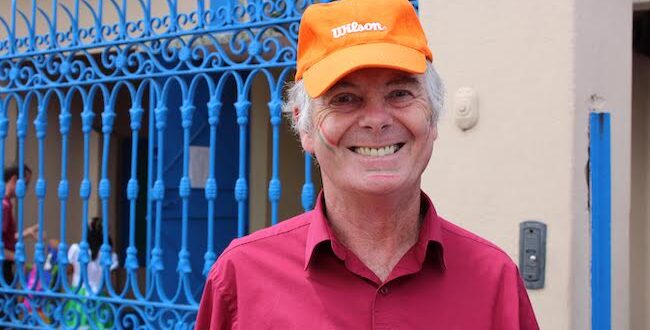 Gordon Jackson at a fiesta while serving as interim principal at a Christian school in Puebla, Mexico, fall 2016/Contributed

So it is not surprising that in his third and newest fiction novel, “Mission Trip to San Pedro 2,” these turns of phrase are found in abundance about a short-term mission trip that veers off course.

The story is about how nine high schoolers, one inexperienced group leader and one anxiety-ridden adult chaperone react to all the roadblocks along their journey to a fictional town called San Pedro and how a local community, whose language the mission team barely knows, graciously comes to their aid.

“I think the story is important because mission is terribly important,” said Jackson. “If you think about it, the only reason we are Christians today is because of missionary activity somewhere in our past.”

Jackson, who is South-African born, said the novel came out of a place of respect for missionaries he met after he retired in 2016 and accepted a short-term mission trip in Puebla, Mexico, to be an interim principal at a Christian school.

The book, however, takes a more critical look at short-term mission trips that are dubbed the “parachute” model by the critics in the story. This kind of mission work typically only deals with quick, in-and-out emergency help, which Jackson can also see the value in.

Nevertheless, he also thinks these kinds of “helps” often come across patronizing and more about making the missionaries feel good.

“My concern is not groups that have become so much more thoughtful and are willing to go and serve alongside an indigenous church,” said Jackson. “It’s the American imperialist approach of ‘Here I am. Listen to me.’”

Randy Larsen, an engineer missionary who works in recruitment and mobilization for Engineering Ministries International and who is former Whitworth student of Jackson’s, agrees with this critique.

“I think in recent years short-term missions has gotten kind of a bad rap because it’s really easy to do poorly,” said Larson. “You know, we’ve come up with the term ‘poorism,’ like tourism, to go and see poor places because it’s something unusual, exotic.”

Larsen reviewed the book for his former professor and wrote in the praise section, the book is “a hilarious and eye-opening look behind the scenes at a feel-good mission trip that goes horribly wrong. Or does it?”

“I lived in other countries for 15 years and we’ll see short term groups come in, and there are times when whatever wall they built or the way they contributed just had to be torn down and redone by the local laborers,” said Larson. “So I think it’s really important that this book is understood and widely distributed among the Western church because it, in its own way, Gordon really shows us that missions is needed and it can be done well.”

According to Jackson, a better model of missions would be more about relationship-building and learning the needs of the local community. Then serving them, even in short-term trips, but over the course of many years.

“If you were to say to me, Gordon, we’re going to put you down in Ukraine tomorrow and you don’t speak any Russian and we don’t quite know what you’re going to do there, but God will honor your commitment to going there,” said Jackson. “Well maybe he will. Maybe I will end up meeting one English speaking person and whatever reason I change that person’s life. But I think God wants us to use common sense and to say, ‘What is it that is the most logical way of doing missions and the way that it most honors the gospel and use of resources, our stewardship.”

Larsen would like to see a part two of this story with some of the same characters applying what they’ve learned from this first mission trip to their second one.

“I think there’s a lot of potential there for a sequel right along the same lines using some of the characters and just moving maybe deeper into some of the issues we face with [international] missions and cross-cultural interactions and just trying to respect and love people well,” said Larsen.

Right now Jackson is taking a sabbatical from writing for a year. He wrote three books during COVID, two of which were published—“The Mission Trip to San Pedro 2” and “Meet the Dog that Didn’t Sh*t: 101 Reflections on Words and Their Magic,” about his odd encounters with American English having been raised in British English.

Jackson is the author of 17 books, including seven anthologies of quotations under various themes, three novels, a few academic books, and a handful of Christian living titles.

www.underhisshadow.blogspot.com
Previous Rams or Bengals? The annual divining of the Super Bowl victor through sacred texts.
Next The Afterlife: Redemption from Hell and entering Heaven