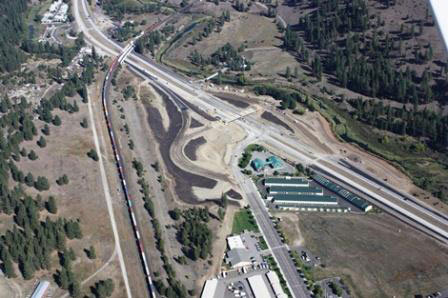 In memory of Lorissa Green: Seeking meaning in the flux

This month they opened a freeway interchange that funnels cars from the Cheney-Spokane Road onto 195, a four-lane, high-speed highway. I drive from Cheney-Spokane onto 195 every day.  The first time I enter the interchange, I see a small sign that says, “In memory of Lorissa Green.”

Lorissa and my son, Nashua, went to school together from first grade until her death the winter of their sophomore year.  The night was snowy and the visibility was terrible. She was 16, a newer driver. She pulled out from the Cheney-Spokane Road onto the heavily traveled 195. A truck she had not seen crashed into her car. I grieved her, a bright, sunny girl, and worried for my sons who were new drivers, and all others distracted or unable to see well at the intersection.

The number of cars entering 195 from Cheney-Spokane was once minimal. When I was a child, my family drove that way when we went to my grandparent’s house. Then the area was wild with pine forests and wetlands that glistened green, even in driest August. Near the intersection was an old farmhouse and fields of vegetables in straight neat lines. It seemed magical to me, all of it, and for years I wrote stories set in this place. Now those farm fields are a shopping complex, and the pine forests and wetlands have vanished under acres of houses.

Over 16,000 cars pass each day through the intersection now. They used to line up on Cheney-Spokane — 20 or 30 — at rush hours, waiting for the moment could dart between the speeding cars and onto 195. The community rose up after Lorrisa’s death, saying something must be done. But it took a long time, and others died first. Finally, five and half years after Lorissa’s death, I drive across 195 on a bridge and merge easily into traffic.

How much the world changes, I think as I take the interchange, how much is lost.

In one instant, a beautiful young girl, someone’s daughter, sister, friend, is gone.

The farmers sell their land to commercial interests. Someone else gets permits and funds to build vast housing developments.

Change is incessant. Often it hurts. People we love die. Places that mattered disappear. Situations that nurtured us end.

We have no control over most of what happens to what and who we love.

This truth is one reason I am religious. Religious communities seek the Center, the greater meaning and power that holds steady when life is all flux and change.  In that Center — however it is named — I seek the peace and strength to live life with love, grace, and joy even when what I have loved is lost.

Previous In mixed faith marriages, focus is on ‘values,’ not ‘beliefs’
Next Update on the SpokaneFAVS Independence Fund