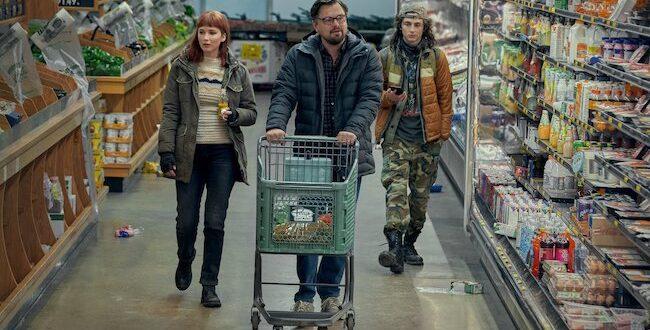 (REVIEW) “Don’t Look Up” is the latest controversial Netflix movie with a determined message: The world is ending, but no one believes it. Intended to be funny and serious at the same time, the film uses cheap jokes that, unfortunately, drown most of its depth — and what little hope and faith exists rests on a handful of characters.

The movie begins with the discovery of a comet that’s going to crash into the earth in six months, eradicating all life. No one really cares though.

It’s an intended metaphor for the urgency of climate change, which is something the film believes people aren’t taking seriously enough. One group it may seem fitting to target is religious groups, who are often labeled “climate deniers.” But the movie isn’t an explicit critique of religious beliefs or a discussion of faith versus science. Instead, it’s a critique of capitalism, social media and what happens when humans take life into their own, selfish hands.

By critiquing so many subjects of such broad range, the movie fails to really critique anything at all. It’s difficult to get an audience to care about climate change when the movie itself is implying people who follow celebrity news are too ignorant to care.

Grad student Kate (Jennifer Lawrence), who discovers the comet, goes on a government and media warning tour with her professor, Dr. Mindy (Leonardo DiCaprio). They’re shunned by the U.S. president in favor of controversy surrounding a Supreme Court nominee, laughed off of talk shows in favor of celebrity breakup news and turned into memes.

Even after the comet is acknowledged, it isn’t feared. It becomes a source of jobs, a political conspiracy and the object of ceaseless discourse. It’s never the best idea to get rid of it entirely — that is, until it’s too late.

If it wasn’t abundantly clear from the plot alone, this movie makes fun of almost everyone it can: politicians, journalists, celebrities, people who like celebrities, people on Twitter, billionaires, conservatives, climate change deniers and more. It’s messy and convoluted, making the movie feel like an extended rant rather than a cohesive artwork.

Along the way, after Kate has mostly given up the mission of convincing an ignorant world of its impending doom, she meets Yule (Timotheé Chalamet). Yule is a self-professed exvangelical with a somewhat quiet, hopeful faith. “My parents raised me evangelical, and I hate them, but I found my own way to it — my own relationship,” he says.

It’s interesting to have a character of faith in the movie, though Yule isn’t a real leader or someone who works to change the fate of the planet. While there’s no emphasis placed on the perceived distance between Christianity and science, there’s no reconciliation of the two either. (At least the movie doesn’t suggest all who deny science are religious, or that all who are religious deny science.)

Instead, faith is shown as something that’s only useful in desperation. It makes sense that frightened people would want to pray in their time of distress. It also seems to ask about the nature of higher powers and the end of the world.

It’s an interesting thing to note because the end of days is a significant event discussed in the Bible, mostly in metaphors and other symbolism.

The way Yule phrases this belief calls to mind the story of the flood, in which God floods the earth and saves only Noah and his family because sin runs so rampant.

“He blotted out every living thing that was on the face of the ground, man and animals and creeping things and birds of the heavens,” according to Genesis 7. “They were blotted out from the earth. Only Noah was left, and those who were with him in the ark.”

The comet creates a similar amount of destruction, primarily through flooding: There are mile-high tsunamis that would trigger a series of other natural disasters. Is the comet from God after all? And what does it mean if the people on earth, perfectly capable of stopping its landing, do nothing and pursue their selfish motivations instead?

Kate, Yule and scientist Dr. Oglethorpe gather with Dr. Mindy and his family for a last supper of sorts before the comet is set to crash into the Earth. They cook salmon and potatoes and eat store-bought apple pie. It’s a wholesome resolution for people who tried to save the world from its doom, and it’s a reminder of sorts for what “the good life” is supposed to be: a simple faith, a home-cooked dinner and conversation with family and friends.

In this, the movie almost achieves a meaning that’s greater than its guilt-ridden, poke fun at everyone-style call to action, but the emotional severity isn’t allowed to last. It’s followed by cheeky credits and comedic post-credits scenes that feature the rich and powerful of the world making it to a new inhabitable planet, where hostile aliens abound, and the president’s incompetent son inexplicably becoming the last person on Earth left alive.

In the end, those who survive to rebuild humanity are the worst of the population — hardly resolving “Don’t Look Up” like the Genesis story, which resolves with God’s promise and rebirth. Natural disaster or not, this apocalypse doesn’t feel like it’s God’s doing. Instead, it’s the greed of selfish humans that brings about ultimate destruction.

“Don’t Look Up” is available to stream on Netflix.

Jillian Cheney is a contributing culture writer for Religion Unplugged. She also writes on American Protestantism and evangelical Christianity and was Religion Unplugged’s 2020-21 Poynter-Koch fellow. You can find her on Twitter @_jilliancheney.

Previous Ask A Jew: Star of David and Conversion
Next A Day in the ER