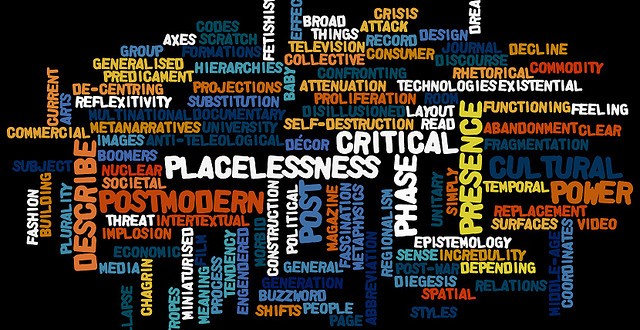 In Defense of Postmodernism

“I am appalled at how easy it is for some people to embrace a new definition of once agreed upon [sic] realities about what it [sic] right and wrong. The cultural conversations about objective reality are sliding faster and faster into the subjective world of personal preference and self-identified reality. Personal opinion has become the faith of the god of postmodernism. The altar of “I” is bloodied with the sacrifices of objective reasoning, moral absolutes and community accountability. People can say whatever, do whatever and when they don’t like how people respond, they sputter, spin, splice and split.”

As a proud postmodernist, I took exception to this portion of Blauer’s piece. But it is not, I think, out of sheer defensiveness that I feel compelled to respond to Blauer.

Postmodernism is widely, and sometimes wildly, misunderstood. “Once agreed-upon realities” were, indeed, agreed upon by some set of people during a particular era. They are social constructs, and while they may be based in or on some amount of seemingly objective truth, they themselves are not necessarily true. For example, the idea that lesbian, gay, bisexual, or transgender (LGBT) identity is pathological, once broadly accepted in the U.S. and elsewhere, has cropped up again recently in the wake of Caitlyn Jenner’s gender transition. Many media outlets and individuals have rashly compared Jenner’s transition to Dolezal’s supposedly transracial identity. I’m not especially interested in talking about Dolezal, but I do want to focus for a moment on Jenner.

Among other factors, correlation/causation mix-ups might have contributed to the pathologizing of LGBT identity. In the U.S., LGBT individuals have been more prone to self-harm, including suicide, than non-LGBT people for as long as social scientists have kept records of such things. One way to interpret this information is to posit that there must be something so dysfunctional about LGBT identity that it can lead a person to self-harm or even suicide.

Another viewpoint combines sociology and psychology rather than focusing solely on the latter. In a society that has historically oppressed, marginalized, persecuted, and even killed people simply for being LGBT, depression and self-harm behaviors would naturally be more common within the oppressed population than among the oppressors.

As a graduate student in psychology at Eastern Washington University, I studied many theories, from Freud to the present day. One that especially caught my interest was narrative theory. The basic idea is that humans think, feel, and behave based on narratives they have internalized, i.e. accepted as true. Society at large and the people immediately surrounding an individual — friends, family, coworkers, community, etc. — have considerable impact on the kinds of narratives we believe.

This is a postmodern theory inasmuch as it deemphasizes the idea of objective truth in favor of focusing on what tends to actually influence our actions and beliefs. People who sincerely think that Jade Helm 15 is a direct precursor to martial law and the collapse of American democracy may behave quite differently from those who find nothing of value in the conspiracy theories. Whatever one’s views may be regarding objective truth, it’s those views that guide our actions, thoughts, and feelings. Our worldview is the inescapable lens through which we see everything, and narratives — interrelated and sometimes contradictory — comprise that worldview.

It has not been easy for mainstream American society to flirt with gender theory. I wouldn’t say we’ve embraced it by any means, but we’re giving it more attention than we did before. Decades upon decades of work by academics, and centuries of lived experience by non-academics, have gotten us to the present moment. “Transamerica,” “Transparent,” “Orange is the New Black,” Laverne Cox, and Caitlyn Jenner didn’t come out of nowhere, and neither did the marriage equality movement. Far from it.

The conservative notion that we’ve just been blindsided by the arbitrary redefinition of traditional institutions is, itself, a narrative, and I don’t find it to be a very convincing one. Gender theory is more than just countless people’s personal opinions. Psychology, sociology, anthropology, biology, and many other fields have contributed to its development, and so have thousands of testimonials by non-academics.

When you read studies in the social sciences, you remember that they are based on the input of actual people. If the study is scrupulous, it won’t create “facts” out of thin air, based solely on what the authors were hoping to see. Social scientists report on what people in various populations self-report, either directly or through experiments. It is conceivable, if highly unlikely, that generations of LGBT people have been completely wrong about their own experience. But unless LGBT communities and their allies across the world start interpreting the Bible as a call to live chaste or closeted lives, the conceivable wrongness of their beliefs doesn’t matter. By and large, they won’t be acting based on Leviticus.

Increasingly, LGBT people and their allies, including many people of faith, are instead acting based on the notion that same-sex attraction isn’t any more problematic or “unnatural” than what religious conservatives tend to see as “traditional,” God-ordained attraction. On the ground, “traditional values” are becoming the source of pie-in-the-sky theorizing. At the same time, an understanding of LGBT identity as perfectly valid is driving thoughts, actions, and lives.

Blauer mourns the loss of “objective reasoning, moral absolutes and community accountability.” I can’t think of any objective reasoning that isn’t either scientific or biblical. Science says two plus two equals four, so we accept it. Scientific theories suggest certain things may be true, so we consider them. The Bible strikes some readers as objective and unequivocal rather than necessarily subject to cultural and personal interpretation. Those readers see ultimate truth and act accordingly. However, those of us who don’t see the Bible that way can believe in moral absolutes as well. I believe, for example, that abusing children is always wrong. I believe that abusing animals is always wrong. I believe rape is always wrong.

A critic of capitalism, or at least a fan of “Les Miserables,” might tell you that theft isn’t always wrong. An NRA member in a “stand your ground” state might tell you that violence isn’t always wrong. So might a person who believes bombing ISIS is the way to go. I can find a few universal truths in this life, but most issues seem morally muddy. Community accountability may help resolve some of the gray areas. If a community agrees, in whatever manner it has of doing so, to forswear “modern” technology, then it has resolved — at least for some period of time — a tricky question of our age: How do we reap technology’s benefits without suffering its ill effects? Answer: We don’t. We shun it. The baby goes out with the bathwater.

Of course, a community that gives up iPhones and laptops and Netflix this year, or this decade, may want something different down the road. Few societies, to my knowledge, condone child abuse and rape. When a community can come to a genuine agreement, rather than being ruled by cruel, power-hungry overlords, it tends to maintain a few, quasi-universal behavioral taboos.

It can feel supremely satisfying to say, with certainty, that many things are “just plain wrong,” period, end of discussion. A moral landscape of black and white offers much more comfort than a sea of gray. But comfort alone isn’t a good enough reason to force moral monochromatics upon a largely gray universe. We form international organizations, such as the United Nations, so that we can, as a species, shout from the rooftops that we think certain things (e.g., child abuse) are always, always, always wrong. But the beauty of humankind, as well as its maddeningness, comes from our tendency to “sputter, spin, splice and split” in response to each other.

Some nations don’t allow much sputtering, spinning, splicing, and splitting. Our First Amendment, so beloved of American conservatives, puts our right to engage in these behaviors front and center. However, it doesn’t guarantee that our free speech won’t have social, emotional, or political fallout, for us and for others.

Communities may form or fall apart based on how well they can tolerate — accept and include, or exclude and penalize — their most fringe elements.  As Blauer himself has noted, FAVS does the sputtering, mixed-up business of connecting disparate people and moving forward with greater understanding better than many, perhaps most, online forums. We even do it pretty well in person.

Postmodernism means a lot to me because it serves as a container for the vexing, fluid, regularly self-reinventing thing we know as human nature. In Judeo-Christian religion, there’s the idea that God loves us all not despite but because of our differences. I like to think postmodernism gives us all space to explore and invent ourselves even if, as of yet, there isn’t a ready-made explanation on the books for each of us.