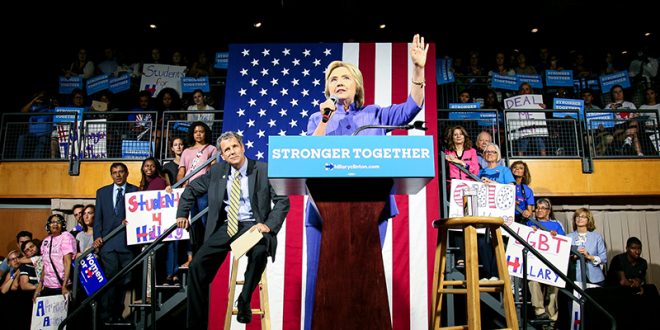 Acknowledging the impossible expectations of our candidates

The collective outrage currently breaking the Internet over Hillary Clinton’s case of pneumonia is the latest example of the impossible standards we uphold for our public figures, and the even more-impossible to attain double standards we hold for female leaders.

Her recent departure from a 9/11 memorial event has sparked alarmed commentary from both sides, as well as sneering criticism about her inability to deal with the strenuous nature of the job she aspires to.

Now, in addition to being womanly, smiling at all times, coaching one’s face into the perfect expression and also being a strong leader on the world stage, presidential candidates are not allowed to get sick.

In addition to promoting an impossible double standard (Clinton has been questioned throughout the campaign by folks about her ‘stamina’), by jumping all over this, we’re also tacitly approving our culture’s obsession with overwork, sleep deprivation and performance anxiety.

Human beings get sick. We need sleep. We need food. We gain and lose weight. Let’s get past it already and move on to substantive issues. Government is not an institution, it is made of people like ourselves: people who we often hold to impossible physical and mental standards.

We focus obsessively on minor details about candidates’ lives in the name of trust and transparency, but how many of us can say we’ve researched political voting records? Tax returns? Varying stances on key issues? How many of us show up at council meetings, read the local paper or even vote?

Perhaps it’s time to admit that most of us don’t know a lot about public service and how the government works. We pay attention to government when we want to complain, and we expect one person to fix everything we think is wrong with government. When this does not work, we disengage once more, frustrated and angry.

This issue isn’t unique to Clinton. George Bush went to state dinners when he was so ill he passed out at the table. I don’t know the exact reason for this, but it’s a fair guess that he pushed himself so extremely — against his doctor’s orders — because he thought skipping would make him appear weak.

Raised in that culture, it seems likely to me that Hillary Clinton would cover her illness and push forward. Her opponents already excoriate her for being weak at every turn, while she faces sexist and competing demands to smile and be more chummy. We demand everything from our candidates — perfect transparency and perfection. This is not possible.

As Nicole Hemmer, a professor of presidential studies, said in a recent story for the Associated Press, “Candidates’ health matters more in terms of optics than it used to, but less in terms of actual ability to hold the office.” Hemmer expanded on her point in a Sept. 12 article for The Washington Post titled “The Hidden History of Presidential Disease, Sickness and Secrecy.”

Many past leaders grappled with chronic illness – Franklin Delano Roosevelt, Grover Cleveland, Dwight Eisenhower and John F. Kennedy are a few examples in the long list. Many of them either outright or partially concealed their illnesses from the public for a variety of reasons. The most central — political calculation. None wanted to appear weak, vulnerable or unable to lead.

“Presidential politics reveals a more subtle trend: Age is not what it used to be. American culture has redefined old age, pushing it back significantly as modern medicine allows people to live longer and remain vigorous well into what used to be considered their dotage. Candidates now run for president when they are already at or near the biblical life span of three score and 10 (Psalm 90:10).

Hillary Clinton is 68, and Donald Trump is 70. They’re the oldest pair of major-party candidates in history. If elected, Clinton would be the second-oldest person to assume the presidency, after Ronald Reagan. Trump would be the oldest. The relative agedness — call it maturity — of the two candidates this year has not gotten a great deal of attention until recent days,” the article states.

As a voter, while I value honesty and transparency from the candidates, I care more about their ability to do their jobs than I do about knowing every detail of a relatively minor illness they may be experiencing. Let’s acknowledge our impossible expectations and get back to what matters.

Previous Ask An Atheist: Why is the Pacific Northwest such an unchurched area?
Next South Africa’s Tutu Discharged From Hospital After Surgery