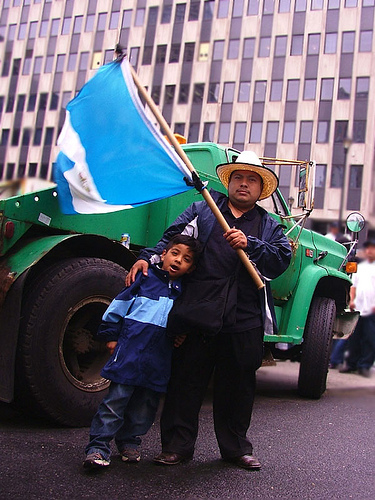 Immigration reform gets personal for evangelicals

I Was A Stranger from G92 on Vimeo.

Bishop Ricardo McClin says it was time to speak up when members of a Church of God congregation he oversaw stopped worshipping in Jacksonville, Fla., because they feared detention.

As Congress appears close to hammering out new immigration policy, religious leaders — and especially evangelicals — say personal  encounters with the current system have prompted them to advocate for reform.

“We’ve sensed in our church this growing understanding that immigration has a face,” said Uth, pastor of First Baptist Orlando. “It has a name. It has a story.”

A recent poll from Public Religion Research Institute and the Brookings Institution shows white evangelicals are less supportive (at 56 percent) than other religious groups of allowing immigrants living in the U.S. illegally to become citizens. But leaders say there’s been a sea change in the last couple of years as they hear about church members being detained or deported and the effects of those measures on their families.

The Evangelical Immigration Table has mounted a six-figure campaign that includes Christian radio ads, distribution of more than 100,000 bookmarks urging congregants and members of Congress to read Bible passages about “welcoming the stranger” and plans for an April 17 lobbying day in Washington.

McClin, a former district supervisor for the Tennessee-based Church of God, said a predominantly immigrant church in Jacksonville shut down after going through ups and downs in attendance by fearful worshippers.

“One Sunday there’s a service, we had 80, 100 people,’’ he recalled. “And the following Sunday there would be nobody.”

“I can’t pretend that everything is going to be OK because of faith,” said McClin, now a pastor in Kissimmee, Fla. “Faith has to be put to work.”

The Rev. Samuel Rodriguez, a longtime advocate for immigration reform, said personal experiences are what have driven many non-Hispanic clergy “off the fence.”

“This is now a Christian issue,” said Rodriguez, president of the National Hispanic Christian Leadership Conference. “It’s not a political issue. It became a Road to Damascus moment.”

In January a broad network of churches —including mainline Protestant, historically black, Orthodox, Catholic and evangelical and Pentecostal leaders — issued a statement calling on Congress and the president to improve the laws.

“Each day in our congregations and communities, we bear witness to the effects of a system that continues the separation of families and the exploitation, abuse, and deaths of migrants,” declared Christian Churches Together in the USA.

Jim Wallis, the evangelical founder of the anti-poverty group Sojourners, said some Christians have seen a passage from the Gospel of Matthew in a new light. It includes the verse that reads: “I was a stranger and you welcomed me.”

He said a “biblical conversion” is occurring, along with a relational one.

“When you worship with people, you get to know them and you get to know their lives and their families and their kids and so stereotypes go away,” said Wallis, author of the new book, “On God’s Side: What Religion Forgets and Politics Hasn’t Learned About Serving the Common Good.” “And you understand who they are and that changes you.”

Evangelical leaders are hoping to use newfound support to galvanize Congress. Scores of pastors are meeting with legislators in their home districts and in Washington, urging them to take the “I Was A Stranger” challenge and study related Bible verses for 40 days.

Wessell said the congressman’s primary focus has been border security but he is in an “information-gathering phase.”

“He’s seeking input from folks, particularly leaders in the faith community, on how to successfully balance federal immigration policy with his faith and biblical principles,” Wessell said.

Beyond the biblical focus, some evangelical leaders are addressing immigration reform for strategic reasons.

While some predominantly white evangelical congregations may not have any immigrants in their pews, denominational leaders are aware that immigrants are contributing to the growth of their churches, said Matthew Soerens, U.S. church training specialist for World Relief, a founding member of the Evangelical Immigration Table.

“If you’re in a denominational office, you know that,” he said, “and you don’t want to see the part of your church that is growing deported.”

The video below appears on the Evangelical Immigration Table website.

Previous We need faith to grow
Next An invitation to join us at the table, help build an interfaith community in Spokane