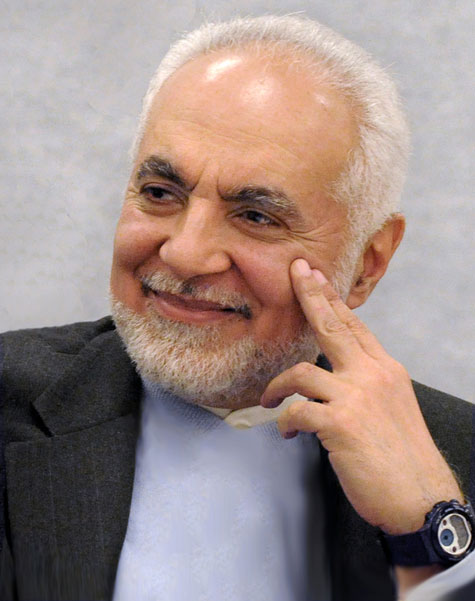 Imam Feisal Abdul Rauf has spent most of his adult life trying to build interfaith and international bridges. But to many Americans, he is the public face of the so-called “Ground Zero mosque,” one of the most controversial religious projects in recent U.S. history.

Rauf reflects on that turmoil in his new book, “Moving the Mountain: Beyond Ground Zero to a New Vision of Islam in America.” But as the book's subtitle suggests, the longtime imam spends most of his time facing forward – toward the development of a distinctly American brand of Islam. He spoke recently with Religion News Service. This interview has been edited for length and clarity.

Q: Why did you write this book?

Q: Are you still involved in the project to build an Islamic community center in Lower Manhattan?

A: The dream is still alive to build a center that, programmatically, will parallel the YMCA and the Jewish Community Center and includes a (Muslim) house of worship, but also reaches out to broader community. But I am not involved with Sharif El-Gamal’s (Park51) project any longer.

Q: Is that because he wanted a more Muslim-focused building, and you envisioned a broader community center?

Q: You write that the turmoil over the so-called “Ground Zero mosque” actually increased America’s standing among Muslims abroad. How so?

A: The opposition tried to brand us as the “Ground Zero megamosque.” The language was deliberately wordsmithed in order to arouse hostility against us. But the idea that the Jewish mayor of New York City and the president of the United States supported a mosque at Ground Zero, and took a lot of flak for it, raised their stature in the Muslim world. Many acknowledged that the same thing could not have happened in many Muslim-majority countries.

Q: You received death threats. Were you surprised at the amount of vitriol the project attracted?

A: Not really. It’s understandable. A certain number of people view Islam as the reason America was attacked. They see anything Muslim or Islamic as fundamentally anti-American, and that’s the link that people like me are trying very hard to break.

Q: Why do you think Islamophobia seems to have increased since 9/11, especially in recent years?

A: There are individuals who are working very hard to promote fear and antagonism towards Islam and Muslims in this country. It’s fueled, in part, by the first African-American president that we have. Obama’s father was a Muslim and people have used this to arouse hostility against him. A kind of racism still exists in the United States, and Islamophobia is a more convenient way to express that sentiment. There has also been an attempt to paint Muslims as enemies of the United States.

Q: And yet, some Muslims think of themselves in exactly those terms. How do you balance between defending your faith and criticizing Muslims who abuse it?

A: That is why the real battle is not between Muslims and the West, but between the moderates and extremists in all faiths. The extremist brand of Islam has become dominant as a result of many political factors, among them communism and secularism. What we need today is a concerted effort to say: We understand that history, but our faith is based on the higher values of loving God and neighbor.

Q: You write that the relationship between mosque and state is the “great unfinished business in the Muslim world.” How optimistic are you that the Arab Spring will usher in states, like Egypt and Tunisia, that get it right?

A: What’s happening in Egypt is extremely important. You can see a lot of factors playing out over there: the country’s relationship with its neighbors, with the Pentagon, with its own military. They are preoccupied with so many things. If the U.S. government could understand and relate to Shariah (Islamic law), then that would be a very powerful factor. But even many Muslims do not understand Shariah.

Q: Why is that? Shariah has been around for more than a thousand years.

A: Because most people don’t really understand their religion. I’ve spoken with friends who are rabbis and priests and we’ve agreed that most people have an emotional attachment to their faith, a desire to fulfill their spiritual longings, but they are not experts in understanding the history of their religion. This understanding comes out of scholarship. For instance, some verses in the Quran have historical, but not eternal relevance. In the last 50 or 60 years literacy has risen, but you can read the Quran and still not understand its context.

Q: You write that the United States is, in many ways, a “Shariah-compliant nation.” How so?

A: Both Shariah and the Declaration of Independence, America’s social contract, state that our rights were endowed by a Creator. Seven centuries before those words (the Declaration) were penned, Muslim scholars said that all of Shariah aims to protect and further six objectives: the rights to life, freedom of religion, property, intellect, family and human dignity. Moreover, many Muslims feel that they can practice their religion more freely in the United States than in any of their homelands.