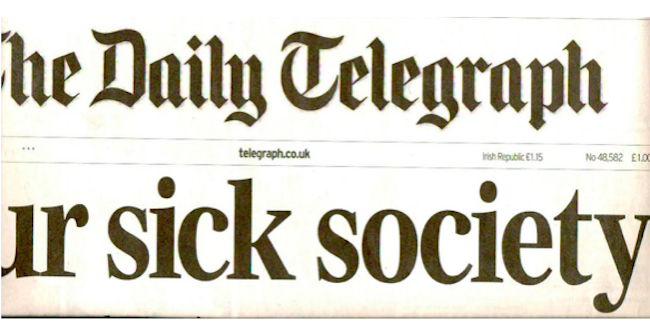 If Society is Sick, What Should We Do About It?

“It is no measure of good health to be well-adjusted to a profoundly sick society.” ~Jiddu Krishnamurti

By being well-adjusted to a sick society I assume he meant, poised to take personal advantage of strife and disharmony. Great quote but, perhaps more often than we like to admit, we use the quote as a sly insinuation that ‘some of us’ are already adapted to the mythical perfect society and no adjustments are necessary. As an activist, it is an easy trap to fall into since the very implication of activism is that others need to correct their course.

Like many I’ve believed the largest part of the cure for society’s sickness is to identify the groups and individuals responsible for the “sickness” of society, and find a way to disempower them; Separation of Corporation and State, with some grassroots support and elbow grease, get some new policies in place, install a new breed of political leaders, and usher into fashion a more progressive philosophy about how to govern, do business, and treat fellow humans. And, in the mean time, sourly refuse to adapt to the human world as it is now, because that would only encourage the evil corporations and lying politicians who make it so damn troublesome.

But that in and of itself will never work. The history of all societies since the beginning of civilization attest to it. At times, we are just as consumed by our own needs for personal power, righteousness, security and social dominance as the people we so proudly want to disempower. The “sickness” is not only some nasty people in positions of power, but that human beings across the globe are still working primarily from our stone-age instincts, as we saw in the previous posts. If it wasn’t so sad at times, it would be rather comical that we learn and adapt to new technologies every six months but, after 10,000 years of civilization we obviously need more time to become civilized. We’re much more efficiently wired to orchestrate a successful mammoth hunt than govern a nation intelligently.

The truth is we haven’t drifted into some unfortunate, short-term imbalance of political power and corruption. We’re in the middle of a long-term, species-wide paradigm shift to bridge the enormous gap between the kind of contentious society our stone-age minds have built us, and the kinder, safer society we’ll have once we’ve finally outgrown the smallness of our regulated human nature, and unitedly advanced our mentality. The mentality that created this mess will never ever be able to clean it up. Progress has never been driven by anything but adaptation to the current environment, and we have adapted to the brink of destruction, now to avoid the dystopian future so prophetic in much of our entertainment, we must quickly adapt once again into something better than our current mentalities, our current paradigm.

Human nature has so many magnificent ways of realizing itself and humans have seemingly endless capacities and options yet, our society is constructed in such away as to restrain nobler aspects, as if human nature is bound by unbreakable laws like physical nature. And as members of society ‘all’ of us find ourselves too often marching along in unison.

I can’t change that though can I? So, regardless of institutional structures, the responsibility of nurturing nobler aspects of human nature has and always will be mine. Not while sitting high, mentally or physically, above everyone on a monastery mountain top but, while I am in the ‘present’ experiencing the same everyday pressures my human family experiences as members of todays society.

If our interest is changing the world for the better, our responsibility is to adjust to the imperfect society we find ourselves in — this one that’s happening right now, with all its faults and ugly spots. Rather than shunning a “profoundly sick society” and holding out for smarter people to be in power; our greatest possible contribution is to learn to live sanely in this insane, dysfunctional society. To do that is to understand what makes it tick — with curiosity and love, rather than mistrust; to temper our emotional reactivity to it, to keep ourselves calm, to learn to improve our own quality of thinking, to get over our contempt for others outside our group, to make peace with civilization exactly the way it happens to be at this stage of its development but, never settle in; as if we have arrived at  the mythical ‘One True System’ that completely conforms to human nature that so many of us advocate for whether, it is religious based, science, or even lifestyles. The one true system will only create institutional structures that impose new limits on the scope and expanse of human nature, similar to how knowledge stops, when we are convinced we already have the answers. That is a bitter pill to swallow but, that type of thinking is the mentality responsible for todays society; where our nature is to reject the answers and lives of others as completely wrong, to stop listening, learning and growing. Our nature has become defensive, well adjusted faction evangelists; fighting to keep power or gain power, many times even in our personal relationships. All the while, we publically profess our disdain for such behavior.

How are we to democratize the structures of decision-making in our political, social and economic institutions, so that everyone affected by a decision has a significant role in making it? How do we empower ourselves as a self-consciously organized majority, so we can create liberatory social relations in which the free and full development of a person depends on, and is made possible by, the free and full development of all of us?

Ultimately, I guess as members of society we will have to no longer let our nature succumb to us vs. them group manipulations, and figure it out using a new mentality and paradigm. Which ever course each individual member of society decides to take, remember this thought: The only advantage that psychopaths and sociopaths have over all the rest of us in society is, psychopaths and sociopaths have a ‘valid’ excuse, for never changing. The rest of us really don’t.