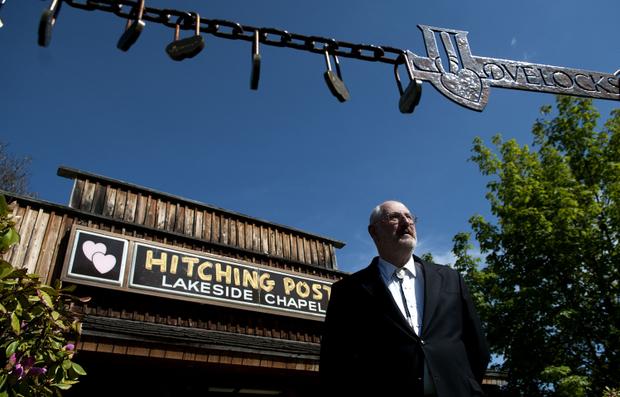 “I just can’t break what I believe,” said ordained minister Don Knapp as he stood in front of the Hitching Post Wedding Chapel in Coeur d’Alene on Wednesday. Knapp says the chapel will refuse to officiate weddings for same-sex couples/Kathy Plonka photo

Share this story!
[todaysdate] (RNS) Husband-and-wife Pentecostal ministers who own a wedding chapel in Coeur d’Alene, Idaho, refused to marry same-sex couples after a recent court ruling, and the American Civil Liberties Union says that’s OK — as long as the chapel only operates as a religious establishment.

The couple’s conservative attorneys insist that Donald and Evelyn Knapp’s Hitching Post wedding chapel remains a for-profit business, and they should be able to turn gay couples away.

In fact, they already have, including twice in the last week.

The dispute is the latest front in an ongoing debate over whether for-profit wedding businesses must cater to same-sex couples in accordance with local anti-discrimination laws. In recent days, that fight just got more confusing.

On Thursday (Oct. 23), the ACLU of Idaho unexpectedly sided with the Knapps. Leo Morales, the group’s interim executive director, said he won’t pursue legal action because the Hitching Post only provides religious services and is exempted from the local ordinance.

Morales said the ACLU would reconsider its stance if the chapel were to offer secular services, such as providing flowers or cakes, or holding nonreligious ceremonies.

The Arizona-based Alliance Defending Freedom, the conservative group representing the couple in a lawsuit against the city, said the Hitching Post is not a nonprofit religious organization like a church, but rather is a religious for-profit limited liability company like a Bible publisher.

Greg Scott, an ADF spokesman, said police in Coeur d’Alene called the couple on Thursday to investigate a possible violation of the city’s 2013 anti-discrimination ordinance.

City police received a call from a married individual in Massachusetts complaining that she wanted to have a ceremony at the Hitching Post but was refused, according to a police report. Police called the owners as part of their standard procedure, said Keith Erickson, a city spokesperson.

“As a religious organization, they are exempt from our anti-discrimination law. They are for-profit.” Erikcson said. “We’re asking them to dismiss this federal lawsuit. It has no merit because the ordinance doesn’t apply to them.”

City officials deny that the couple have been threatened with legal action. “We have never threatened to jail them, or take legal action of any kind,” Erickson told the Coeur d’Alene Press.

But confusion has rested on whether or not the chapel operates as a for-profit or non-profit operation.

“If they are operating as a legitimate not-for-profit religious corporation then they are exempt from the ordinance like any other church or religious association,” City Attorney Mike Gridley wrote to the ADF earlier this month.

Calls placed to the city attorney’s office were forwarded to a voicemail, saying that the office is receiving an influx of calls related to the lawsuit and calls would not be returned.

Scott said the couple fully expects to face legal action for their stance against same-sex marriage, which became legal in Idaho earlier this month.

As more states allow same-sex marriage, tensions between religious institutions and nondiscrimination laws will likely continue to arise. From florists to bakers, several courts have ruled that businesses that provide a service to the public must be provided to all, including same-sex couples.

ACLU staff compared the case to chapels in Nevada, which are now required to perform same-sex marriages because they do not provide just religious services.

At least one Las Vegas chapel owner has said she will continue to decline to officiate at same-sex weddings. She plans to either hire ministers to perform same-sex marriages at the chapel, fight the issue in court or close her business down.

According to the ADF’s lawsuit against the city, for each day the Knapps decline to perform the ceremony, the couple could face a $1,000 fine and six months in jail. “Thus, if the Knapps decline a same-sex wedding ceremony for just one week, they risk going to jail for over three years and being fined $7,000,” the lawsuit states.

Warren Wilson, a city official, told the local newspaper that might be the case, if it was a “continuing violation.” He said if a business declines to serve someone because “we don’t serve your type,” and then several days later, it does it again, that would be two incidents, not a continuing violation.

“This is not intended in any way to be a harsh or overly punitive ordinance,” Wilson told the newspaper.

Previous Bible Backstories: Where is Yeshua?
Next Bethany Presbyterian to host Conversations on the Middle East