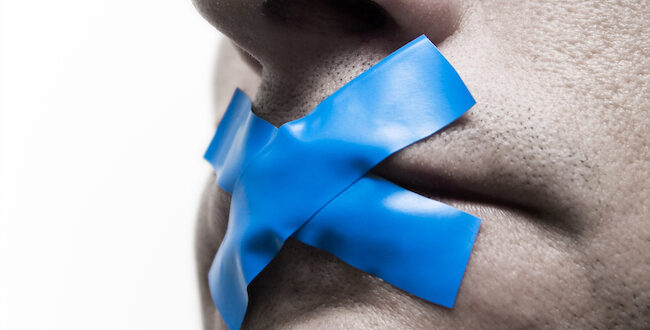 Man with tape over his mouth/DepositPhoto

I am the person that stood and watched Mr. Floyd be murdered and did nothing. It’s easy to watch the scene and blame others for not intervening, for not standing up for justice, but I realize I too am just as guilty for remaining silent.

I am silent in the face of such pervasive and systemic racial injustice apparent around me every single day. How can I point my finger in disbelief saying, “how could they watch that suffering and do nothing?!,” when I too stand by as entrenched systems of injustice hold people victimized everywhere I turn. I see that level of suffering in all of our systems, I’d have to be blind not too, and I do nothing.

It doesn’t take a knee on a neck to suffocate people from their basic human rights. We have many ‘knees’ holding people of color down, that I don’t protest. Unequal school systems, legal processes, hiring practices, the list goes on and on. Sure I don’t like it, but have I ever done anything of substance to intervene?! No, I have to admit I just watch in shame, in grief, in hopelessness. But how can we continue to be bystanders to systems of our own making? Implicit equals complicit. We can’t hide in the comfort of ignorance. Ignorance caused from ignoring the truth and reality within and around us is not ignorance.  It’s choosing to look away.  It’s choosing to be silent.

I often admire the people of history that stood up and risked their own lives, that sacrificed their own privilege, that continued to hope and try when all seemed hopeless. But I realize, history will ask all of us, “what did you do in the face of racism?” There is no option to sit this out. You are a character in this story and you either participate implicitly or explicitly in racism or you actively work to diminish it both within yourself and your environment. There is no in between.

I can’t just sit back and chastise ‘those racist people’ while I enjoy the privilege I was born with and continue to benefit from. We live and breathe in an injustice, unequal society, there is no denying it. Or perhaps that’s why we try, because facing the horrendous weight of that truth and responsibility feels almost too much to bear. Allowing myself to truly acknowledge the depth of the pain, I feel I can hardly breathe. But it is only the privileged who can choose not to feel pain, to choose not to feel uncomfortable. And the scale doesn’t tip unless comfortable people are willing to be uncomfortable, and eventually come to see that comfort comes at the cost of other’s.

Yes, it’s painful, acknowledging the hard truth of racism. And the rampant racism we have currently feels much harder to eradicate than the racism of the previous century.  It feels analogous to cutting off the hair of Medusa only to have it return in a million tiny, slippery ways that are much harder to pin down, much harder to fight. Implicit bias, entrenched systems of inequality, micro-aggressions are so much harder to call out, to tackle. And it’s even worse, when so many claim the monster is dead…no, it lives within each of us, and will continue to do so until we have the courage to look in the mirror and take our blinders off. When we acknowledge that racism isn’t about individual people choosing to be racist, it’s all of us who participate, and remain silent.

Previous Ask A Muslim: Does Everything Happen for a Reason?
Next Sports teams an opportunity to teach about Native American culture