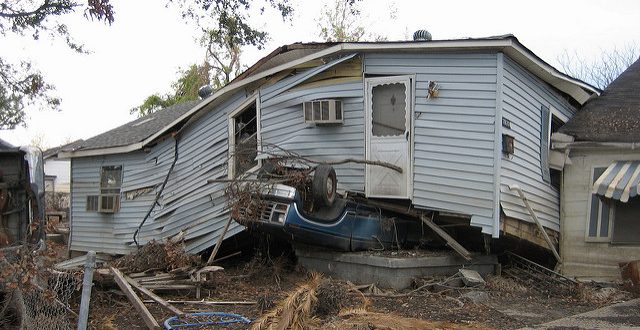 Why do natural disasters occur? Usually that question falls within the professional domain of meteorologists, seismologists, volcanologists, and the like. In some theological circles, however, the conceit of an interventionist God forces another question: When a natural disaster happens, is it God’s will? If God is in total control of our world, how could it not be? And perhaps most crucially: Why would God create or allow such catastrophes unless we, his people — or at least a particular subset of us — had erred grievously in some way?

That sort of thinking leads to what I term “disasterology.” This emerging field may not be unique to the 21st century, but it certainly gets a lot more exposure today than it ever did pre-Internet. To illustrate what I mean, I’d like to present a case study: several explanations of Hurricane Katrina by disasterologists who firmly believe that when the winds howl and the waters rise, there’s more at work than just jet stream shifts.

The year was 2005. Katrina devastated the Gulf Coast and left New Orleans in shambles. Pastor John Hagee, founder and senior pastor of Cornerstone Church in San Antonio, Texas, said this in response: “God caused Hurricane Katrina to wipe out New Orleans because it had a gay pride parade the week before and was filled with sexual sin.” The obvious takeaway: Gay pride parades cause hurricanes. Following that logic, and considering that Spokane’s parade celebrated its 25th anniversary this year, I imagine our very own hurricane will be reaching us anytime now.

For his part, Rabbi Ovadia Yosef saw a connection between Katrina and the forcible evacuation of Israelis, by the Israeli government, from a bloc of settlements in Gaza: “Bush was behind the [expulsion of] Gush Katif… He encouraged [former Prime Minister Ariel] Sharon to expel Gush Katif… We had 15,000 people expelled here, and there 150,000… It was God’s retribution… God does not short-change anyone… This is [Bush’s] punishment for what he did to Gush Katif, and everyone else who did as he told them, their time will come, too.” One Knesset (Israeli parliament) member’s response? “I know meteorology well enough not to believe such rubbish.” Fair enough.

Of course, clergy weren’t the only ones who thought evildoing caused Katrina. Anti-abortion activist Steve Lefemine proclaimed: “In my belief, God judged New Orleans for the sin of shedding innocent blood through abortion.” Do New Orleanians have more abortions per capita than residents of other major American cities? Even some anti-abortion websites concede that Louisiana’s abortion rates in 2003 and 2004, the years directly preceding Katrina, were lower than the overall U.S. rate. But I suppose God had to start somewhere.

Lest Islam feel left out, Kuwaiti official Muhammad Yousef Mlaifi wrote in his opinion piece “The Terrorist Katrina is One of the Soldiers of Allah”: “It is almost certain that this is a wind of torment and evil that Allah has sent to this American empire.” Few New Orleans residents would deny that Katrina, regardless of its provenance, felt like “a wind of torment.” Plus, it’s always satisfying to get the three Abrahamic faiths accounted for!

What does any of this have to do with resiliency? I’d say plenty: Groups that have to put up with being singled out for causing disasters (e.g., gay people) are incredibly resilient. So are the largely compassionate faith traditions that extremists hijack to claim that some people’s “sins”  force God to mete out meteorological mayhem.

“Faith, Resiliency and Natural Disasters” is the topic of the Oct. 1 SpokaneFāVS Coffee Talk, which will take place at 10 a.m. in the Community Building, 35 W. Main Ave. All are invited to participate in this community discussion.

How conveniently we forget that “the rain falls on the just and the unjust” when we’d like to describe the activity of the divine as being on our side, and in line with our interpretation of justice. Sigh.
Looking forward to the conversation this weekend!