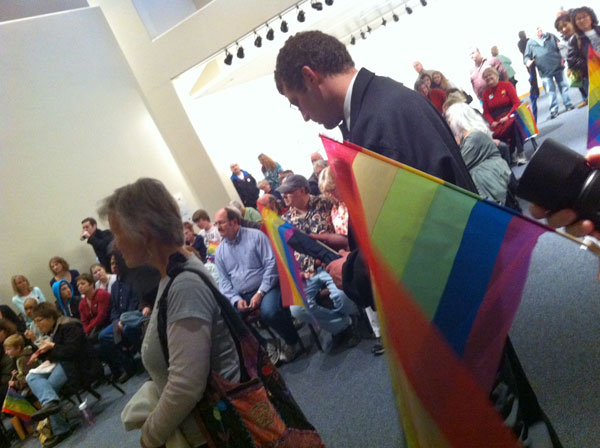 Hundreds show up at council meeting to talk gay marriage

Council is allowing people to speak who didnt sign up. About 15 people are waiting to speak.

The council has finished hearing testimonies and are taking a short break before voting on the issue.

As of 9:18 p.m. the council still has three pages of names of people waiting to testify for or against same-sex marriage.

“In this audience is my wife for 12 years and our relationship has never been effected by another person’s marriage in any way shape or form. If you don’t want homosexual marriage, don’t enter into one,” he said.

He said previous testimonies from the public testimony have been hurtful and said people need to stop pushing their religious agendas.

“These people are trying to interject religion where it doesn't belong and they need to step back from that,” he said. “They will not have a single change to their religions by allowing others to have same privilege they’ve enjoyed.”

The CastroLangs, a progressive religious family in Spokane, spoke in favor of gay marriage. The Rev. Andrea CastroLang of the Westminster United Church of Christ said religous groups shouldn't be able to sway civil rights.

“I know my forefathers and mothers came here so they could worship as they saw fit,” I'm asking you to remember andthan honor that protection. I'm asking you to pass this resolution and support the law of this state of Washington.”

Her son, Nick CastroLang, said supporting same-sex marriage sends a message all across the state that all people, even those from the LGBT community, are valued in Spokane.

“GLTB members contribute to this city as well, and we should provide for them,” he said.

The Rev. Jim CastroLang, of Colville United Church of Christ, read a proclomation signed by local clergy supporting gay marriage. In it, he apologized for the ways the church has hurt the LGBT community.

Spokane resident Carol Black also opposed the gay marriage resolution. She said it's not an appropriate issue for the city council to discuss because only God can declare what marriage is.

She added that she fears what might happen to those who “think they're smarter than God.”

Randy Altmeyer, director of the men's shelter at Union Gospel Mission, said he's worked with several men who have overcome the “homosexual lifestyle” and urged the council not to approve the gay marriage legislation.

He said homoexuality leaves families void of morality, which in turn harms society. He wasn't able to finish his speech in the allotted three minutes, but did add that homosexuality has a devestating impact on children.

“Every child wants a mother and father,” he said, adding that kids learn to fill that parental void with things like drug, violence and sex.

Matthew Cannon, director of the Inland Northwest LGBT Center, came out in 1988, when it was “unacceptable,” he said, adding that his coming out put Spokane on the map.

“Looking between that time and where we’re at now is really exciting,” he said, adding an optimistic spin on a divisive issue.

He added, though, that he's made a second-class citizen by being denied rights.

A PFLAG (Parents Friends and Families of Lesbians and Gays) representative reminded the council that Spokane's gay community is alive and well.

“We're a part of your community too, a bigger part than you know,” she said.

So far LGBT opponents have dominated the floor, but Alli Kingfisher just addressed the council, telling them why she wants the right to be able to marry her long-time partner.

“I would like to stop using words like 'partner' or 'domestic partner' to define my relationship. Language is important,” she said, noting that 'wife' is the appropriate word to describe the commitment, love and respect she and her girlfriend share.

The first person to speak during the public testimony compared gays and lesbians to communists, saying gay marriage corrupts families, society and government.

Following speakers said gays don't have the right to change the definition of marriage, pointing to biblical stories like Sodom and Gomorrah.

“It comes down to faith,” one man said. “If you do this (approve the resolution), you curse Spokane and he (God) will curse Spokane. This is my city and I want to be blessed.” 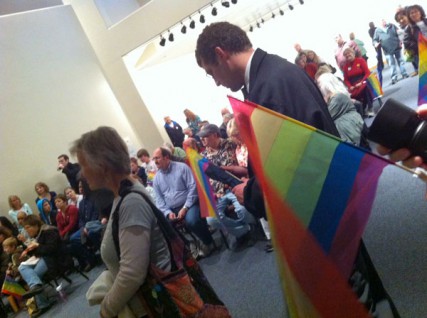 Many of the LGBT advocates listened to clergy read a marriage equality proclamation before entering council chambers and are therefore sitting in the overflow area.

One council member said so many people are signed up to speak he expects the meeting to last until midnight, at least.

Updates will continue to be posted here.

Previous GUEST COMMENTARY: When religion and spirituality collide
Next Will evolution ever be proven to be incorrect?