Buddhist teachings are practical, useable and helpful. At least, they can be if adherents strive to strengthen their minds, Ven. Bhante Seelawimala said Saturday morning at the opening service of the 65th annual Northwest Buddhist Convention. He was one of 300 Buddhists who gathered in downtown Spokane for the conference, which continues through the weekend and is being hosted by the Spokane Buddhist Temple. Buddhists, mostly Shin, traveled from Idaho, Oregon, California, Washington and parts of Canada to attend the conference. [youtube http://www.youtube.com/watch?v=TzrOdEAmENg] In Seelawimala's talk, “Experience the Dharma,” he explained how the Buddha journeyed to enlightenment and what he learned along the way. Seelawimala is a Theravada Buddhist monk from Sri Lanka who teaches at the Institute of Buddhist Studies at Berkley.

“The Buddha found that almost every person does not use the mind to its fullest capacity,” Seelawimala said. “The mind is very powerful…but we don't know how to use it and because of that we experience all kinds of problems in life…it's a corrupted system, and it's corrupted by our own behavior.” Self-centeredness, he said, is the root problem of the corrupted mind. He said the key to having a perfect mind and joyful life is simple. “All you need to do is keep the Buddha in mind and you will become calm, peaceful and more focused,” he said. The Buddha that one needs to focus on, he clarified, is not the person, but instead are the qualities of wisdom and compassion. Seelawimala spoke during the public portion of the event. Many non-Buddhists were in the crowd and he urged them to test his advice. “Buddhism is the only religion in the whole world that says if you don't believe me, go see for yourself,” he jested. 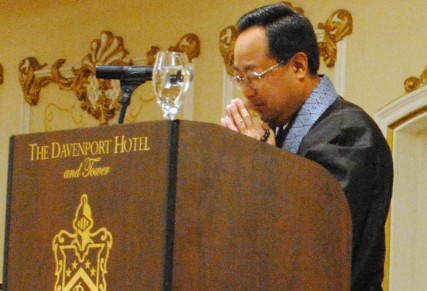 Rev. Marvin Kenju Harada of the Orange County Buddhism Church, spoke after Seelawimala, delivering a keynote address on the essence of Buddhism. Learning to control our egos, he said, is how one can live a peaceful life. He said marriages, families and societies struggles when egos clash. “The ego-self is causing all the problems in life,” he said. “I think Buddhism offers the ultimate solution to all life's problems, it gets to the core of the ego-self…and teaches us how to be liberated from the problems caused by the ego-self.” The theme of the conference is “Under Amida's Umbrella of Compassion.” Amida is the Buddha of light. Numerous workshops were available to attendees Saturday afternoon, as well as a banquet dinner. The convention will conclude Sunday with a dharma message by Harada. “When you're bringing 200 to 300 Buddhist together from across the Northwest district, it's always a wonderful experience,” said Jefferson Workman, a minister's assistant at the Spokane temple. “We're proud people came out for this.” The temple will be offering an introductory course on Buddhism in March. For information visit the temple online. [youtube http://www.youtube.com/watch?v=xpoHClK7u7E] View more photos of this event on our Flickr album.