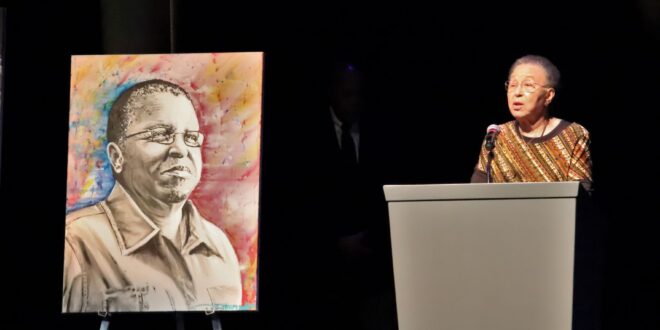 Wilhelmenia Williams, Sandy Williams' mom, had the privilege to speak last about her daughter’s life and legacy. To her left is a recent portrait Dennis and Theresa Cronin commissioned of Spokane artist Jacob Johns. (Photo by Cassy Benefield/SpokaneFāVS)

On Tuesday, several hundred people came to honor Sandy Williams’ 61 years on earth for her celebration of life event hosted by the Carl Maxey Center at the First Interstate Center of the Arts.

“We want you to know that this community loves Sandy,” said NAACP President Kiantha Duncan, who emceed the more than two hour ceremony.

Williams died Sept. 5 in a plane crash over the Puget Sound.

The people on the stage who paid tribute to Williams, who was the editor and publisher of the Black Lens newspaper and the executive director of the Carl Maxey Center, read like a list of who’s who of social justice leaders in the community.

Spokane City Councilwoman Betsey Wilkerson opened the program relating to everyone in the audience as if they were one big family who had not seen each other in a while.

Spokane City Council President Breean Beggs and politician and educator Lisa Brown shared how much Williams inspired their own work.

“It was gratifying to work with her in a professional capacity at the state level, connecting her wisdom to the newly created State Office of Equity,” said Brown. “Her vision and her work helping us recreate government that dismantles rather than reinforces racism and other unjust policies and practices.”

Toni Lodge, director of the Native Project, and “co-conspirator” with Williams for 30 years, gave a land acknowledgment and spoke of her proudest work with Williams, which was helping vaccinate 10,000 marginalized people with the COVID vaccine.

Theresa and Dennis Cronin spoke of their “fierce” and “courageous” friend and unveiled a painting of Williams they commissioned from local artist Jacob Johns, who also painted a picture of Carl Maxey to celebrate the 100th anniversary of the Spokane NAACP chapter.

All this despite the fact Williams would probably not have liked all this spotlight.

“We all know Sandy did not like personal accolades and was a very humble person,” said Theresa Cronin.

Still, Williams’ desire to not be out front did not stop those who wanted to highlight her advocacy, achievements, vision and passion for the BIPOC community — especially the Black community — and the LGBTQ community she was a part of.

Sylvia Brown, Carl Maxey Center member at large, reminisced about the times she and her wife would have dinners with Williams and her partner, Patricia Hicks, and the fun they shared. Her part in the program was to acknowledge Hicks and her contributions to the community, but most importantly her influence in Williams’ life.

“As you all know, Pat was with Sandy [on the plane] and that always brings me comfort with that thought because it helps me to know that Sandy wasn’t by herself, that she was with her companion,” said Brown. “So, after continuing to remember Sandy, let’s not forget about Pat Hicks because she helped complete Sandy.”

Many in the audience also had stories of the impact Williams made on their lives. One of those was Payton Walling, grandson to Carl Maxey Center Board Treasurer Curtis Hampton, and longtime family friend.

“You could be standing in the middle of a hurricane, but Sandy was like the ultimate umbrella, just keeping you safe and sound and when she was around, you just knew things were going to be okay, even if there was no okay in sight,” said 25-year-old Walling, who remembers Williams celebrating birthdays with his family when he was young and sharing a hug with him when he needed it growing up.

“This is the first week in my life where Sandy hasn’t been part of my life,” said Walling. “She’ll continue to inspire me and push me, and her advocacy work for the LGBT community is really huge and a legacy that I aim to uphold uplift through my every day. I think that’s how I honor Sandy.”

Throughout the evening, pitches were made by the speakers to keep supporting Williams’ legacy. One way to do that was to donate to her beloved causes, the Black Lens and to the Carl Maxey Center.

Rob Curley, the editor of the Spokesman-Review, committed to do even more.

“We’re not going to let the Black Lens die,” said Curley, which was followed by a long applause in the audience. “Sandy’s words really packed a punch, but it’s her legacy that’s inspiring. So let’s work together to keep the Black Lens, okay?”

Williams’ mother, Wilhelmenia Williams, had the privilege to speak last about her daughter’s life and legacy.

“Sandy wanted people to love, respect and hear each other,” said Wilhelmenia Williams. “You’re used to love your neighbor as yourself. She didn’t want you to stop with just your neighbor. She wanted you to love everyone. There’s more things about us if we take the time to listen and talk and them than just being a neighbor.”

At the conclusion of the event, the organizers played an almost 4 minute video interview of Williams, where she spoke of her social justice work, her leadership style — which was one of seeing the need and doing what needs to be done to fill it — and her proudest accomplishment.

“What I am the absolute most proud of in my life is that in a country that tends to do everything that it can to put roadblocks in front of women, and particularly women of color, as a mom, I have raised a daughter who is proud, who is smart and capable and who is achieving in a country that doesn’t necessarily see that as possible for her,” said Williams.

“I’m proud that she has in turn turned around and seen me as somebody to be proud of. That’s big. I don’t think it gets better than that for a mom to have a daughter be proud of her.”

Previous Features of Online Dating for Christians
Next Seeing with your own eyes, not through the eyes of your neighbor