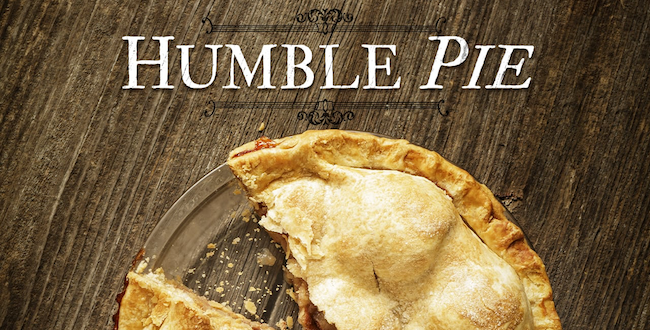 Humble Pie: On the Paradoxes of Happiness, An Invitation

About four years ago, I picked out an old Backpacker Magazine hidden in the stack of magazines we dub The Bathroom Reading.  Previously, I’d only glanced at the magazine’s enticing photos for future adventure fantasies—the fate of much of that collection. This time, however, on a lark, I found myself reading the editor’s opening statement. His three paragraphs changed the paradigm, and thus the trajectory, of my life.

He’d taken a six-month sabbatical to return to nature and the quiet that accompanies the lone hiker. Most of all, he wanted to grow—that word so many of use without much thought. Does it mean to gain more control over our lives, our minds and emotions, or does it mean to recognize our moment-to-moment vulnerability? What do we mean exactly when we say we want to grow?

What the editor discovered on his journey was that he didn’t grow; he became small. The size of a human being. When seen clearly, as he did, a human isn’t very big at all. Our every breath is a gift from innumerable causes and conditions, our life but a temporary eddy of a million simultaneous chemical reactions. We are comprised of more non-human microorganisms than human cells. Despite the fact that the majority of words in the English language are nouns, nothing exists independent or fixed. Everything is process.

I find being a process, like everything in our known universe, the greatest of reliefs. Becoming small exposes what we really are: “some of the mud that’s had a chance to sit up and look around,” as Kurt Vonnegut quipped. Becoming small means the burden of self happily absents itself of that incessant voice inside our skulls—the one with agendas, preferences, and righteous opines.

Emerson said, “A great man is willing to be little.” We are little, small, frail, vulnerable, a skin bag (as Buddhists say) giving us the illusion of separateness from our surroundings. Our body is on loan. We may have to give it back in the next heartbeat. We don’t know.

What I do know is that humility, becoming small, has an inverse relationship to increasing happiness. I long to rest under a star-spackled sky in the wilderness that nudges me nightlong to remember my proportionate place in the universe. We’ve all tasted this freedom and accompanying joy. It’s our birthright.

Having studied world religions from college onward, I’ve come to believe that humility is the single common thread joining all wisdom traditions. Until we swallow considerable mouthfuls of humble pie, we humans seem to require help chipping away at hubris and ego, seeing through the delusion of a sovereign self, acknowledging the gift of our brief, miraculous time on earth.

It might be that everything I’ve learned about living—both the painful and the wondrous—has humility as its essence. I didn’t realize it until I turned fifty, and until turning sixty, had no idea that all along, humble pie was the surest path to contentment. Our relationship to that truth is dangerously fragile, vanishing with the first distraction (The root of the word distraction is to be pulled apart).  Everyone feels the unease inherent in distractions: I looked in my thesaurus and found driven to distraction, frenzy, mental distress, mania, madness.

How to remember humility in a society that seduces us with thousands of distractions a day? How to find our way back to rest in our lived experience at a human pace, at a human size? Let us swim against that giant current of consumerism. Let us remember to remember—the actual translation of the term sati, mindfulness, from the Buddhist cannon—our smallness.

To be sure, humility as a virtue has its detractors: Nietzsche, for instance, states that humility is a strategy of the weak to avoid being destroyed by the strong. In “Twilight of the Idols“ he writes: “When stepped on, a worm doubles up. That is clever. In that way he lessens the probability of being stepped on again. In the language of morality: humility.” Golda Meir leaves us with this paradox: “Don’t be so humble; you’re not that great.”

Winston Churchill found humble pie not exactly delicious, but definitely nourishing: “In the course of my life, I have often had to eat my words, and I must confess that I have always found it a wholesome diet.”

How has humble pie tasted to you? Like the metallic trace of a chemo left on the tongue, or sublime as the nectarine that spills its juice down your chin? Like watching yourself condemn a person only to know yourself a fool, once again, when you hear his life story? Like seeing your mother’s skin thin and tear, and then watching your own do the same? Like the breathtaking, charmed days of falling in love? Like betrayal?  Like the sudden death of friend or kin? Like the instant community of strangers facing a tragedy? Like not knowing all the plants, animals, and people you should thank for the meal that arrived on the table before you?

I want to know what you’ve learned from growing smaller. Introduce us to humility’s shy or stark teachings whether they appeared through the study of science, through your ninety-year old neighbor, or through your young daughter’s observation of an insect. Write in with your story. Try for 500 words or so. Let me know whether I can publish excerpts for readers with your name, or whether you’d like to remain anonymous.

What important lessons have you gleaned from humility’s stealth power? Which experiences do you remember to remember for inspiration and, or courage? Frank Ostaseski, author of “The Five Invitations: What the Dying can Teach us About Living Fully,” says that the marrow of every arriving moment of life also contains its death—our inevitable and final bow to humility. Why wait until then to pay attention?