Home / News / Humanists push for a National Day of Reason 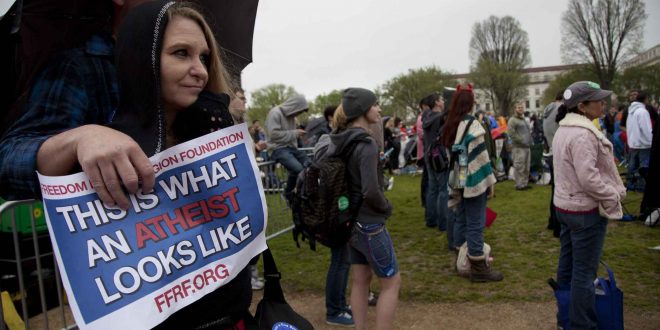 Thousands of atheists and unbelievers gathered on the National Mall for the Reason Rally in 2013. RNS photo by Tyrone Turner

Humanists push for a National Day of Reason

(RNS) Not all Americans pray.

So the American Humanist Association, among the largest national advocacy groups of nonbelievers and other secularists, wants the first Thursday in May to be recognized by Congress as a National Day of Reason.

But that day is already designated as the National Day of Prayer, with a 65-year history of support from Congress, state and local governments and every sitting president since its inception in 1952.

And that, says Roy Speckhardt, executive director of the American Humanist Association, is the problem.

“This is government recognition of prayer and that is wrong, no matter how you look at it,” Speckhardt said. “Having a National Day of Reason on the same day says this is an example of a day the government can endorse that doesn’t exclude people based on their answers to a religious question.”

There is little indication the humanists will get their wish. A proposal to create a National Day of Reason went nowhere in Congress last year; this year’s proposal is stalled in committee.

Still, there is some evidence that support for it is picking up and that nontheism is shedding its reputation as the so-called third rail of American politics:

But with national days recognizing religious freedom, the Wright brothers and even recycling, does this country need a National Day of Reason? And why must it be on the same day as the National Day of Prayer, created by President Harry S. Truman and supported by religious groups of all stripes?

For Matthew Bulger, a legislative associate at American Humanist, the answer to the first question is “yes.” The federal government and politicians at all levels ignore or reject a National Day of Reason at their peril.

“That’s telling an entire segment of the population that its government supports certain religious values and is not concerned with the nontheistic views of a large portion of the American population,” he said. “You are discouraging Americans from participating in the political process because they assume that their views will not be considered by their elected members of Congress.”

Bulger points to polls that show 23 percent of Americans say they are not affiliated with any religion. Among them, 61 percent say they believe in God, and 62 percent say they “seldom or never” pray.

Supporters of a reason day hope it will follow the path taken by International Darwin Day, advanced by nonbelievers, scientists and others on evolutionist (and atheist) Charles Darwin’s Feb. 12 birthday.

Created by a handful of  scientists and nonbelievers in the 1990s, Darwin Day has grown to be recognized at the international, state and local levels. Though Congress has yet to pass a formal resolution, it has gained support each year, organizers say.

Some Christian churches and Jewish congregations, too, embrace Darwin Day with “Evolution Weekend” and other congregational-based events.

But experts on secularism suggest the wait for a National Day of Reason could be a long one. Alan Wolfe, director of Boston College’s Boisi Center for Religion and American Public Life, gave it “no chance at all,” and Paul Djupe, co-editor of the journal Politics and Religion, characterized the AHA’s choice of the same day as the National Day of Prayer as more of a fundraising tactic and less than a serious intention.

“Religious people still compose the vast majority of Americans and so Congress, especially a Republican Congress, will have no truck with this proposal,” Djupe said. “But, too, the nonreligious tend not to be motivated by these kinds of appeals unless they are squarely pitted against religion.”

There are some signs a National Day of Reason is gaining ground among some Christians. Christian columnist Jim Denison and religion scholar Diana Butler Bassendorsed it in an essay in 2013.

Nick Pitts, director of cultural engagement for the Denison Forum on Truth and Culture, a Christian advocacy group based in Dallas, said there is no reason Christians cannot support a National Day of Reason.

“It’s almost a false dichotomy that we have to choose,” he said. “If you are an evangelical, you understand from Isaiah 1:18 that our Lord said, ‘Come and let us reason together.’”

Then, citing the work of Rabbi Jonathan Sacks, he said, “Science asks the ‘how’ questions and religion asks the ‘why’ questions. Personally, as Christians, I don’t think we have anything to be afraid of.”

Previous A perfect storm for sexual abuse: Christian privilege, purity culture, and the doctrine of repentance
Next Why public health scholars should study pornography

On Saturday afternoon at the South Hill Spokane Public Library, Donell Barlow, author, health coach and member of the Ottawa tribe, shared her personal journey of healing from trauma by connecting to her culture and Native American spirituality.