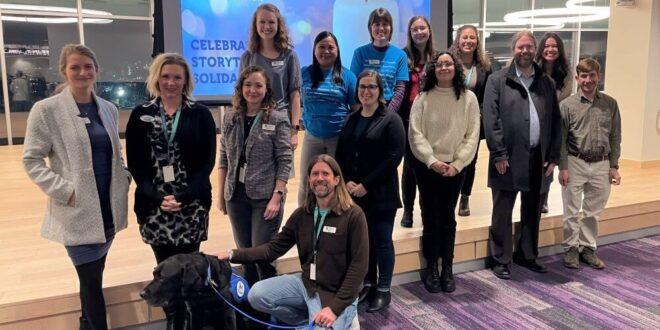 A 15-year daughter ran away to be with a man she “loves,” who uses her to dance in a club. A boy called “Suzy,” who “had a name once,” is made to do things no child should ever do in between the times he plays with his toy truck. A 16-year old couple survives by the boyfriend going on “dates” to make enough money, so he and his girlfriend can sleep in motels and have hot pizzas for dinner because their homes contain unimaginable violence.

These are just some of the true stories of human trafficking victims that were featured on life-sized, purple silhouettes of people, an exhibit called the Silhouette Project. There were seven total on display as part of Wednesday night’s Human Trafficking Awareness Month Community Reception held at the Spokane Public Library’s Central branch.

The Inland Northwest Human Trafficking Task Force, facilitated by Lutheran Community Services Northwest (LCSNW), hosted the event as an awareness campaign for the public and a time different abuse and crime advocacy groups — such as the Kalispel Tribe Victim Assistance Services, Mujeres in Action and the Unaccompanied Refugee Minor Foster Care Program — can come together to learn what services are provided in the community.

“This event is important because the topic of human trafficking is often misunderstood and unrecognized,” said Abigail Dougherty, chair of the Task Force and a crime victim advocate with LCSNW. “It provides an opportunity for the community to learn more about what trafficking looks like in their area as well as how it is being addressed.”

Working together, these groups are able to give wrap-a-around support to victims of crimes and abuse that could include medical and legal advocacy, housing, counseling, job training and more.

“This collaboration and awareness leads to the ability to better serve survivors,” Dougherty said. “Ultimately, we hope this event honors past, present and future survivors by educating others.”

The event began with a brief introduction about how human trafficking presents itself in a lot of different ways.

“Often times, survivors are not identifying their experiences as trafficking, but rather sexual assault, domestic violence from an intimate partner or a family member, wage theft or identity theft or just a couple of the victimizations that survivors can identify,” said Dougherty.

Then, Mayor Nadine Woodward, via pre-recorded video, proclaimed January 2022 as “Slavery and Human Trafficking Prevention Month,” including in her statement that “forced labor or sexual exploitation is the third largest crime industry in the world.”

Prior to the reception, LCSNW also hosted a Human Trafficking 101 training session in which about 40 people showed up, a number that far exceeded Dougherty’s expectations. She said that she thinks it’s great that more people are paying attention to human trafficking.

“I count that as a success, one more person in the community learned about this topic,” Dougherty said, referring to a man who was not sure he should come, but did, and he was glad he did.

Admitting to just “scratching the surface” of what human trafficking looks like, Dougherty led this session and one of the topics she covered were common myths, such as human trafficking just being about sexual exploitation, which it’s not. It also includes forced labor, and many migrants are victims of these crimes, which can be in the form of domestic labor or working in agriculture in slave-like conditions.

Another myth includes that most trafficked victims are forced to stay with their handlers. The opposite is true. Many can leave their handlers at any time, but don’t for many reasons.

Heather Eddy, assistant director of the Catholic Charities of Eastern Washington’s St. Margaret’s Shelter and a member of the Task Force, thinks the idea that a victim can “just leave” is one of the most misunderstood things about human trafficking.

Handlers, groomers and, even, family members typically exploit the most vulnerable, usually people who lack a support system, Dougherty mentioned in the training. She also said that from 2016-2020, Polarisproject.org stated that 1,076 trafficked cases were reported to the National Human Trafficking Hotline in Washington alone.

Polaris is “a data-driven social justice movement to fight sex and labor trafficking at the massive scale of the problem – 27.6 million people worldwide deprived of the freedom to choose how they live and work,” according to its website.

While the role of helping human trafficking victims can be hard for all involved, Eddy says being part of their journey toward healing is worth it.

If you believe you may have information about a trafficking situation:

Previous Robert Feeny to be installed Jan. 14 as pastor at Spokane’s Westminster Congregational UCC
Next Examining the Teachings of Jesus in the Gospels

Thank you for this eye-opening report, Cassy. Good to see so many different groups in the Spokane area coming together to deal with this issue and help the victims of human trafficing.