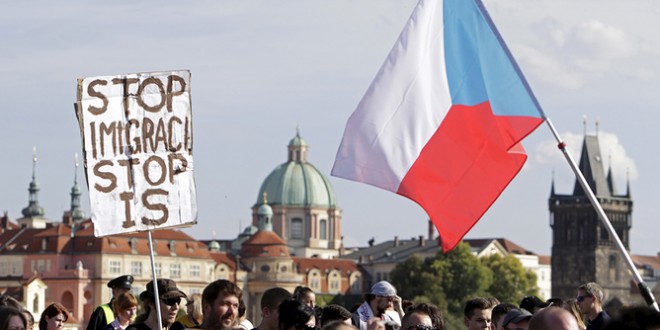 In many quarters, the refugees have been greeted with protests. Reuters

One of the predominant news stories over the past few months has been the migrant crisis in Europe.

Driven by civil wars, refugees from the Middle East and beyond are flowing into the European Union. Over the next 18 months, the UN is expecting more than 1.4 million refugees to arrive in the EU.

The swell will have many long-term implications, but governments and citizens are facing a more pressing question: what policies should they adopt toward refugees in the short term? Should they welcome them, reject them or something in between?

How they answer that question has a surprisingly lot to do with how we react to climate change. In both cases, a large chunk of the population embraces a view contrary to the overwhelming verdict of empirical evidence. Thus, understanding one will help us better understand the other.

I was discussing these issues with colleagues when I realized the similarities they bore to my own research, which involves studying why people fail to follow through with their intentions.

In my work, I often come across situations in which individuals act in ways that run contrary to what they want. For example, though many understand the necessity of acting in the refugee crisis, their actions fall short of their intentions. Personally touched by the current situations – both my parents were refugees – I sought out to understand what can we do about it.

In many quarters, the refugees have been greeted with protests.

Refugees get a mixed reception

While some government officials (most notably German Chancellor Angela Merkel) have welcomed refugees, others have actively opposed liberal border policies.

In some countries, such as Austria and Poland, polls have shifted rightward as certain conservative parties use anti-refugee slogans to leverage votes. The public is split: some citizens are open, others protest.

From an economic point of view, the case for immigration is strong. Empirical evidence clearly shows that refugees are a positive economic influence that can stimulate long-term growth.

A recent report published by the World Bank, the Organisation for Economic Cooperation and Development (OECD) and the UN’s International Labor Organization concludes that “in most countries, migrants pay more in taxes and social contributions than they receive.”

Demographic trends show that many countries in the EU are aging too fast to maintain a healthy economy and that an influx of relatively young and skilled workers could alleviate this problem.

Of course, integrating hundreds of thousands of refugees into a country is not easy. But even Germany, the country experiencing the biggest swell, recently declared that “every euro we spend on training migrants is a euro to avoid a shortage of skilled labor.”

So despite the encouraging evidence, why does widespread opposition against the influx of refugees and their right to asylum persist?

An apple a day keeps the climate at bay?
Reuters

To answer this question, it helps to understand why people oppose another hot-button topic: climate change. Study after study has revealed a link between the amount of carbon dioxide in the atmosphere and the increase in the average global temperature.

Yet many people continue to insist that the climate is not in fact changing. Why?

The answer to both questions may be found in their common dominator: human psychology.

Maybe because each problem shares a common basis, solutions to both have failed to be successful so far because they make use of an incomplete set of tactics. Even though the political tactics needed to solve each problem are different, we can create a toolbox that leverages what we know about psychological biases to help policymakers make better decisions about both issues.

Specifically, climate change and the EU migration crisis face a decision bias that psychologists call “intertemporal choice”: a trade-off between a smaller gain in the present and a larger gain in the long term.

For example, research suggests that we’re more likely to take $50 now rather than $60 in a month’s time because turning down a smaller sum today feels worse than gaining more later. Similarly, investing in climate change and refugee integration now will yield positive payoffs in the long term, even though the immediate payoff will be small – or may even result in perceived negatives, such as cancellation of school sports programs because refugees are housed in sports facilities.

Both problems are also hindered by the status quo bias.

When the current situation is sufficiently satisfying, it is difficult to motivate people to change. Most countries don’t feel the effects of climate change, much like the civil wars that refugees are escaping from are not felt in the European Union.

When we observe that the current state of affairs is adequate, we use it as a reference point to evaluate our decisions about the future. As a result, we perceive pro-environmental or pro-refugee decisions as a bonus but do not view it as necessary to change.

However, governments approach both problems very differently. When people talk about climate change, they typically cite scientific research to emphasize its threat to our long-term survival. Organizations and individuals use “green” branding to show the public that they are climate-conscious. We organize recycling campaigns, art exhibitions and concerts to raise money and awareness to fight climate change.

For the refugee crisis, supporters cite moral and humanitarian concerns to motivate people to welcome refugees. Action occurs largely on a national level, with coordination attempts futile at best. In this context, some countries step up and announce their responsibility, championing strong leadership to provide national solutions, whereas others shrink from action.

Lessons for the migrant crisis

What can the climate change debate learn from the refugee crisis?

Germany’s Merkel, unlike many of her peers, has welcomed refugees.
Reuters

In contrast, efforts to address climate change have been notoriously uncoordinated. The 2015 UN Climate Change Conference in Paris, to be held from November 30 to December 11, is the 21st attempt to achieve a comprehensive global agreement on the climate. To strive toward an effective solution in Paris, we may need a strong leader.

In addition, the refugee crisis provides climate change campaigns with an interesting illustration of the power of narratives. Note that Merkel quickly called the refugee crisis a “humanitarian crisis.” Thus, people who do not support refugees can be labeled as inhumane or immoral. Instead, climate change advocates have historically drawn on the language of science, which doesn’t grip human psychology to the same extent.

What can the refugee crisis learn from climate change?

In both cases, citizens are so preoccupied with the immediate costs that they may fail to appropriately recognize the long-term benefits. A smarter strategy should therefore make the payoff from investments in refugee integration feel more immediate and tangible, similar to the efforts of companies like Hive, which provides immediate feedback to consumers on energy-saving behavior.

Rather than framing the influx of refugees as a problem to be solved, policymakers should advertise its potential economic advantages by highlighting stories of successful refugees to make the benefits more tangible. Green champions abound in the political and organizational landscape; the refugee crisis needs an equivalent.

Unfortunately, European citizens with immigrant backgrounds have often fought so hard for recognition that their public image is disassociated from their heritage. A greater emphasis on international backgrounds may better highlight the possible gains that refugees have provided.

A common source for biases

Although it may not seem likely at first glance, many crises share a common source in human decision-making biases. Whether it is the refugee crisis, climate change or another crisis, the barriers formed by a preference for short-term gains and the status quo are hard to overcome.

Thinking about these problems separately can preclude us from realizing that the different approaches we use to solve them in reality should all stem from the same toolbox.

By understanding that many crises share psychological underpinnings, we can ultimately learn from each to solve all, both now and in the future.