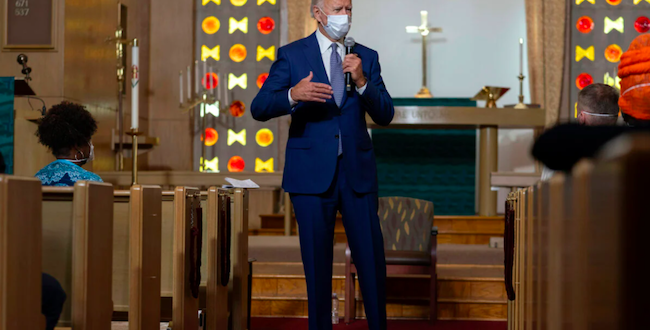 How will Joe Biden deal with the abortion question?

For the duration of the Democratic primary season, the abortion issue was off the table — largely because all the significant candidates were solidly in support of abortion rights. The one exception might have been Joe Biden, who has swum outside the party’s pro-choice mainstream, but last year he abandoned his longstanding support of the Hyde Amendment, which bars Medicaid funding for abortion, and so there was nothing to talk about.

Now that the general election is here, there’s something to talk about. The question is, how will Biden, a practicing Catholic, talk about it?

Biden became a U.S. senator in 1973, the very year Roe v. Wade made abortion a constitutional right. “I don’t like the Supreme Court decision on abortion,” he said the following year. “I think it went too far. I don’t think that a woman has the sole right to say what should happen to her body.”

As a member of the Senate Judiciary Committee in 1982, he voted for a constitutional amendment that would have allowed individual states to overturn Roe — and then, in 1983, he voted against it. Thus began his pro-choice journey.

Biden has justified his abandonment of the Hyde Amendment on several grounds. He first cited near bans on abortion in several states, when denying Medicaid funding would presumably affect the right to choose by making it too expensive for a poor woman to travel to another state.

“I can’t justify leaving millions of women without the health care they need,” he declared at a Democratic gala in Atlanta in June 2019. “If I believe health care is a right, as I do, I can no longer support an amendment that makes that right dependent on someone’s ZIP code.”

A couple of weeks later, Biden tied his opposition to his proposal for expanding Medicaid coverage. The idea seemed to be that if more women had their health care covered by the federal government, under the Hyde Amendment more women would lack abortion coverage.

Whatever one makes of those arguments, neither represents that kind of statement of principle that the last Catholic nominee for president gave when asked about his position on abortion.

Responding to an audience member at a town hall forum in 2004, John Kerry began by declaring his Catholic bona fides and then went on to say:

But I can’t take what is an article of faith for me and legislate it for someone who does not share that article of faith, whether they be atheist, agnostic, Jew, Protestant, whatever. I can’t do that. But I can counsel people… I believe that you can take that position and not be pro-abortion … But as a, as a president, I have to represent all the people in the nation … And that means being smart about allowing people to be fully educated, to know what their options are in life, and making certain that you don’t deny a poor person the right to be able to have whatever the Constitution affords them if they can’t afford it otherwise.

Kerry’s arguments about not imposing his faith on others and not denying poor women a constitutional right were made at Notre Dame 20 years earlier by then New York Gov. Mario Cuomo in the most important pro-choice speech ever delivered by a Catholic politician. Cuomo also drew a careful distinction between religious principle and prudential political judgment, pointedly noting that while his church opposed slavery, virtually no Catholic bishops felt it in their church’s interest to do so in antebellum America.

Cuomo’s speech did not lack for Catholic critics, including members of the hierarchy. Kerry had even more to deal with, including statements from some clergy that they would deny him Communion if he showed up at their altar rail.

Simply by taking the positions he has, Biden, too, has received even harder brickbats than Cuomo did. Providence Bishop Thomas Tobin tweeted, “Biden-Harris. First time in awhile that the Democratic ticket hasn’t had a Catholic on it. Sad.” (That was pretty peculiar, given that Hillary Clinton’s Catholic running mate Tim Kaine made the identical démarche on the Hyde Amendment that Biden did.)

Knoxville Bishop Rick Stika opined, “Don’t understand how Mr. Biden can claim to be a good and faithful Catholic as he denies so much of Church teaching especially on the absolute child abuse and human rights violations of the most innocent, the not yet born.”

Like John Kerry, over the next two months Joe Biden is going to be asked to explain his position on abortion as a professing Catholic. He may not be the kind of intellectual Mario Cuomo was, but it is surely not beyond his resources to explain the relationship between his personal views on abortion and the public policies he would advance.

For a public subjected to increasingly hard-line positions on both sides of this most neuralgic of issues, it would be the kind of balm that Biden says he wants to bring to the country.

Previous FāVS Online Social Coming up Sept. 10
Next A message of equality: The story of Bilal ibn Rabah al-Habashi