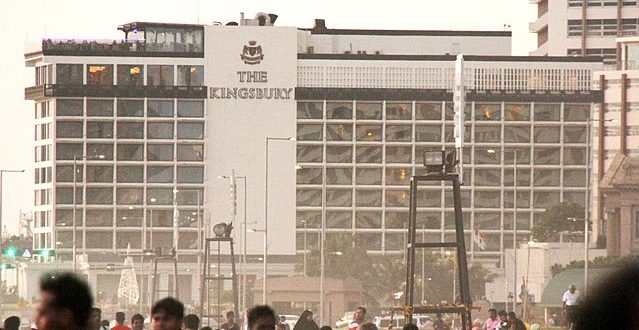 The Kingsbury Hotel in Colombo, Sri Lanka/Wikipedia photo by AKS.9955

How valuable are you? No more violence

The loss of even one life in the California synagogue shooting or the Sri Lanka church bombings is vastly more tragic than the recent fire at Notre Dame Cathedral in Paris. The cathedral can be rebuilt. The lives of those who died cannot.

I don’t care how poor or uneducated a person is. I don’t care if they can’t draw a straight line, let alone paint a masterpiece. No artwork is as great, as valuable, as precious as a single human life because all the artworks in the world were created by living human beings, each of whom used his or her talents in unique ways for the benefit of all.

The cathedral fire apparently wasn’t intentional. The deaths in Sri Lanka and California were.

What makes this incomprehensibly worse is that the victims were as vulnerable as possible. They were worshiping. It takes an award-winning coward to attack the vulnerable, as has happened many times in the recent past when worshipers were killed, including Christians in Pakistan and South Carolina and Muslims in New Zealand and Canada within the past few years.

If there is a post-Easter message in this, I think it would be that all of us, whether we are people of faith or not, must decide whether human life is THE most important “thing” or whether something else is. And then we must act in ways that demonstrate the truth of what we believe.

I can’t speak for those of other religions, or no religion at all, but Christians are called to choose life above all else because life is the gift we share with the God who created us.

I would rather have seen Notre Dame reduced to rubble than to see even one worshiper slain anywhere. This may sound like sacrilege to those who love the cathedral’s “Rose Window,” which is, without argument, an artistic masterpiece.

But the news coverage about the art inside the cathedral made me uncomfortable because, in praising the artwork, we can easily forget the greatest art of all – God’s creation of each one of us.

How much do we really appreciate every one of the 7 billion people on this planet? Who looks carefully at any human face and sees even greater beauty and uniqueness than is found in the Rose Window, the Pieta, the Sistine Chapel ceiling?

It can be argued that there is only one Rose Window, one Pieta, etc., which makes each of these creations unique. True. But there is also only one you. And God shares his life with us in part because he wants us to see the true beauty that he has created. I am uniquely beautiful. And so are you. Each of us is God’s greatest masterpiece.

When we elevate the beauty of an object above that of another human being, we are saying we prefer to be in awe of the things humanity has created rather than those whom God has created.

There are so many of us on this planet that it’s easy to take each other for granted. And we have all done that. We have ALL discounted, denigrated, devalued, marginalized and forgotten about other human beings. We have played favorites by loving our friends and despising our enemies. And we have all been the victims of such behavior demonstrated by others, whether our bosses, spouses, kids, parents, “friends,” enemies, etc.

People of faith are increasingly at risk of being subjected to that kind of behavior. We are being singled out as targets, whether we are the targets of derision, criticism or violence. Or, perhaps worst of all, the targets of indifference.

The challenge of remaining faithful and living our faith means that sometimes, because of our faith, we aren’t valued as highly as a chunk of stained glass. And that’s when we must say, “Father, forgive them, for they don’t know what they’re doing.”

But living our faith also means we must allow God to reorder our values, which  brings us face to face with an even more difficult challenge. It’s the challenge of rejecting the indifference that lurks within ourselves.

People of faith are not just the occasional victims of the indifference, derision or violence that devalues us. Sometimes we are the source of these same things that devalue others. And when we devalue others, we insult the God we say we worship – the God who created us and every one of “them.”

Previous Ask A Religious Scientist: What Do You Think About Jesus
Next Chabad Spokane to Host Evening of Prayer & Reflection for Poway Shooting