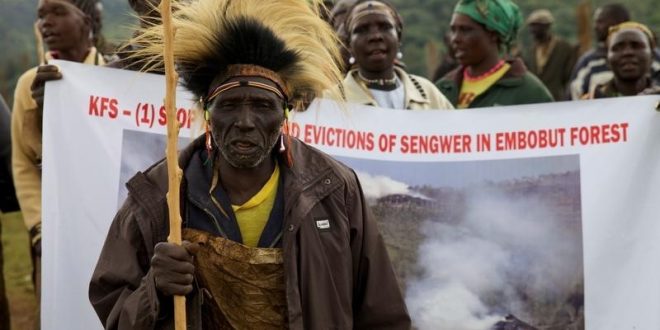 People from the Sengwer community protest over their eviction from their ancestral lands, Embobut Forest, by the government for forest conservation in western Kenya, April 19, 2016. REUTERS/Katy Migiro - RTSF0LB

How to stop deforestation? Give indigenous people rights to land — U.N. Expert

ROME (Thomson Reuters Foundation) – Indigenous people are better than governments at preventing forests from being cut and should be seen as a solution, not a barrier to protecting them, the U.N. Special Rapporteur on the Rights of Indigenous People said on Tuesday.

Indigenous peoples and communities have claims to two thirds of the world’s land but are legally recognised as holding only 10 percent, according to think thank World Resources Institute (WRI). [nL8N13552M]

Without title deeds, indigenous communities may find their land is taken over for major development projects such as palm oil plantations and logging.

“Society thinks that indigenous peoples are claiming land that they shouldn’t be having because it should be used for expanded food production,” U.N. Special Rapporteur Victoria Tauli-Corpuz told the Thomson Reuters Foundation.

But giving indigenous peoples rights to land was a guarantee that forests, which store carbon and contribute to food security would continue to exist, Tauli-Corpuz said.

“In the Philippines we had maps done which show the overlap between the communities whose rights to land and territories have been recognised and the remaining forest in the country,” she said on the sidelines of a global forest conference in Rome.

“The so-called protected areas that were managed by the government were deforested compared to the territories where indigenous peoples continued to live,” she said.

“That shows that the interventions of indigenous peoples are more effective in terms of protecting and sustaining the forest compared to the efforts of governments,” the Philippines native said.

Tauli-Corpuz said conservation efforts should not serve as an excuse to remove indigenous peoples from their land because, depending on forests for survival, they are best placed to monitor and protect them.

“… studies show that where the (indigenous) people are the ones taking care of the forests, conservation is much more effective,” she said.

Tauli-Corpuz called on governments to end impunity for killings of activists, like Berta Caceres, an award-winning Honduran environmental rights activist, who was shot dead in March.

“Indigenous peoples shouldn’t be killed because they are asserting that they would like to be heard.”

According to the United Nations, there are an estimated 370 million indigenous people spread across 70 countries.

Previous Making America Wait Again
Next Ask A Mormon: Do Mormons believe the Garden of Eden is in Missouri?