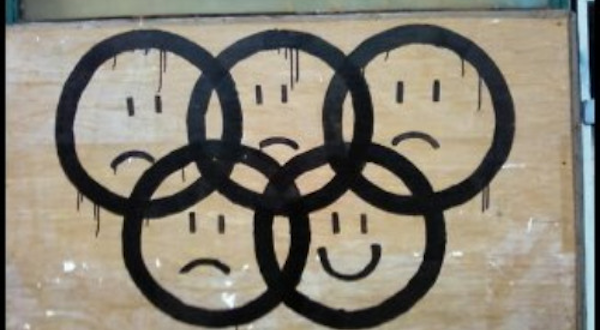 Flickr photo of happy and unhappy faces by Lorraine Murphy

How to be unhappy

Years ago I heard a quote that has always stuck with me: “Americans are the only people on earth stupid enough to believe we should be happy all the time.” I still laugh at that cheeky statement, but cannot deny that our national obsession with happiness is the currency that propels media and perhaps even our economic growth. We get it: If we are unhappy, there’s a big L on our forehead.

When a friend’s teenage daughter became suicidal this spring, I grew nosey as well as concerned. I’ve known a number of teens that barely squeaked through an adolescent existential crisis. At least one credits my willingness to meet him in that dark place with the fact that he is not seven feet underground. I assure my young friends that an existential inquiry, the search for meaning, is the most rational response to the state of the world. I also confess to have spent my share of time in similar anguish, sometimes just this side of self-demise. The shame of being unhappy (at least in front of me) gone, teens open up. So do adults.

One of the aspects I found both horrible and poignant about my friend’s child was her conclusion that brought her to the precipice: “I can’t seem to be happy like all of my friends on Facebook are.” I have a dear friend, Nancy in Knoxville, whose child successfully died by suicide with the help of social media.

Putting aside the frontier of social media vis-a-vis suicide, I’d like to discuss the cultural meme that happiness and unhappiness are binary and that our greatest pursuit in life (as codified in our constitution) must be the pursuit of happiness. The cultural messaging of happiness or bust leaves us ashamed and emotionally crippled when suffering inevitably arises. Without a context for anguish or grief, and without room in our hearts to name it and discuss it, we perpetuate for our children and ourselves a dangerous delusion about the human predicament.

Suffering, unhappiness, needs to come out of its bunkered corner: the Buddha did his best to bring it to our attention through the First Noble Truth of dukkha—the suffering inherent in the ephemerality of our lives as well as our happiness—but I believe we need a more filled-out stage presence for Americans to understand that he meant us, now. Here, now. In our particular, unique situation.   “One of the most important things we can do right now in this culture is to grieve,” says Francis Weller, “because it is a protest against the collective agreement to turn our backs on what is happening.” It’s not an individual’s failure that longing for things to be other than they are arise: it’s a universal condition.

We seem to be blind to a key unexamined misconception: everything in the world is subject to change except us. The fear of being with unhappiness is that we will be stuck in that territory forever, ashamed, helpless and well…in pain. We will be stuck—it’s called repetition compulsion in psychoanalytic circles—if we aren’t willing to be intimate with the full range of human experience. At the root of the word, emotion, however, is the Latin root for motion, movere. All things, including our mind states, transform: neither mind nor body remains the same from one moment to the next.

Entering the spiritual life is a way into suffering, not the leap over it. The title of this essay is only partially ironic: perhaps we have to learn to be unhappy, learn to know it, say it, and share it, instead of turning away. Even with our children. And especially with our teens—they see our sufferings and watch us bury them in silence. If you don’t believe me, ask a young adult: despite pretending otherwise, they are our keen observers. This cognitive dissonance they discern between feeling and action in adults might be their first lesson in hypocrisy. It’s definitely a lesson in dishonesty that will cause them tremendous confusion and amplified suffering when they can’t or won’t allow unhappiness in themselves.

My friend’s child I spoke of at the top of this essay spent four days and nights in the emergency room waiting for treatment in Spokane. She never received it. There were no beds available in the pediatric psych ward. After many sleepless nights and frantic phone calls, the mother found, at last, some help for her daughter in the community. I have another friend whose son in Montana succeeded in dying by suicide, not with the aid of social media, but because mental health services for the suicidal are in dismal shape across the country. I see in both circumstances a societal denial of unhappiness with tragic consequences. But maybe there’s a crack in the always-happy-American façade: yesterday, I drove by a sign for the new psychiatric facility under construction on 5th and Browne. Thank you Spokane.

We’ve got it all wrong: our suffering doesn’t make us unique; it makes us belong. As the psychologist Rollow May wrote, “One does not become fully human painlessly.” Grief, unhappiness, and disappointment insist that we honor what is most precious to us—love for, and connection to, one another. Grief and love cannot be separated. Neither can happiness and unhappiness.