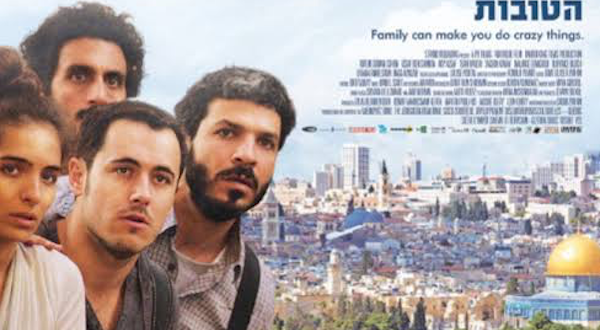 From "The Kind Words" poster, which will be shown at the Spokane Jewish Film Festival

Since starting work as the director of Spokane Area Jewish Family Services, I haven’t heard many complaints about the Spokane Jewish Cultural Film Festival, which SAJFS organizes. (That’s my full-disclosure statement, in case you missed it.) Some Jewish community members have asked me, however, to avoid presenting year after year of all-Israeli programs. Jews live all over the world, after all, in many settings and societies, not just Israel (or the U.S., for that matter). SJCFF includes only three screenings, so we, the organizers, feel compelled to make each movie count. To give my perspective on the festival’s commitment to diversity, I’ll summarize its progress since I arrived on the scene two years ago.

In 2015, we showed the terrific Israeli military satire “Zero Motivation,” which Amy Poehler and Natasha Lyonne are adapting for American television. We also screened two documentaries that seemed to have less broad appeal: “The Green Prince,” about the son of a Hamas leader who for 10 years worked as a spy for the Israel Security Agency (aka the Shin Bet), and “Above and Beyond,” about the birth of the Israeli Air Force. Notice a pattern? Israel through and through. And while the Jewish state is of tremendous importance to a great many Jews worldwide, there’s a lot more to being Jewish than just Israel, particularly for diaspora (non-Israeli) Jews.

Also, I have nothing against documentaries as a genre, but many festival attendees expect to see, and are interested in, narrative features more than documentaries. If we feel our community would appreciate and benefit from it, we’ll program an exceptional documentary. Last year’s “Brave Miss World” — about an Israeli beauty pageant winner who, after being raped, became a powerful advocate for sexual assault survivors — is a prime example. But some years the fiction films truly win out.

If we’re presenting fictional stories, we have an obligation to reflect, at least to some degree, the kaleidoscopic variety of Jewish life, religion, humor, politics, and thought. Our film selection process includes both a volunteer selection committee and the SAJFS board. My festival co-chair and I have final say, though we certainly take into account all the feedback we get from the board and committee.

Last year, in addition to “Brave Miss World,” we showed “A Borrowed Identity” and “Magic Men.” All three films did have ties to Israel, but they also reached beyond the country’s borders more than our 2015 selections. Linor Abargil, the titular “Brave Miss World,” was and remains a globetrotting activist who seems to spend as much time in the U.S., Africa, and other parts of the world as in Israel. The international relevance of her story and message is what makes the film as effective as it is. Abargil’s experience is both a Jewish story, as elements of traditional Judaism aid in her recovery process, and a universal one that women from across the planet can relate to.

“A Borrowed Identity” includes several Jewish Israeli characters, but its protagonist is a Palestinian teenager from a Muslim family. I wondered how the audience, which has tended to be mostly Jewish, would respond to this. Fortunately, most festivalgoers appreciated the film’s funny, deeply humanistic portrayal of its characters as well as its focus on individual and familial stories, which made the political issues easier to digest. As an opening night selection, it was a hit.

Finally, “Magic Men” is a dual character study that focuses on a secular, Greek-born Holocaust survivor and his Orthodox Israeli son. Greece isn’t a country most people associate with Judaism, but as that catchy camp song reminds us, “Wherever you go, there’s always someone Jewish.”

A festival that depicts Jewish life in Israel and the U.S. alone leaves out 2.4 million Jews, an estimated 17 percent of the world’s Jewish population, who live elsewhere. So while the majority of Jewish-themed films take place in the two most Jewishly populated countries, it enriches everyone’s understanding of Judaism if we don’t ignore that 17 percent.

To that end, our selections for 2017 brim with diversity. “Once in a Lifetime” takes place in France, is almost entirely in French, and focuses on a multicultural group of high school students from various religious and socioeconomic backgrounds. “Transit” is set in Israel, but most of its main characters were born in the Philippines, and the fact that some are migrant workers drives the film’s central conflicts. The Hebrew language and key aspects of Jewish society still figure prominently in the story, but the movie, written and directed by a young Filipina filmmaker, showcases the often underrepresented cultural diversity of Israel.

“The Kind Words” might seem at first glance like a straightforward Israeli dramedy, but as is apt for a film about long-kept family secrets, it’s not exactly what it appears to be. I won’t say much more, except that France again enters the mix, and the movie takes a fascinating approach to the kind of Jewish-Arab tension that underlies so many Israeli films.

This year the festival isn’t just presenting a diverse mix of films; we’re also hoping to appeal to a broader audience than we’ve reached before. We’ve moved the event to Gonzaga University’s Hemmingson Center, and we’re hoping to draw plenty of university faculty, staff, and students over the weekend. The sizable auditorium should accommodate both our crowd of festival veterans, who attend reliably each year, and a new crop of academics, young adults, and other Spokanites who want to better understand what it means to be Jewish.

In a way, the film festival is to SAJFS what the long-running, legendary Kosher Dinner is to Temple Beth Shalom: an event by and for the Jewish community, but also one of our community’s biggest outreach opportunities, a chance to tell non-Jews about the joys and struggles of Jewish life. Particularly at a time when intercultural fear and misunderstanding abound, I believe events like the film festival, which bring people together to celebrate and talk about different cultures and ideas, are more important than ever.