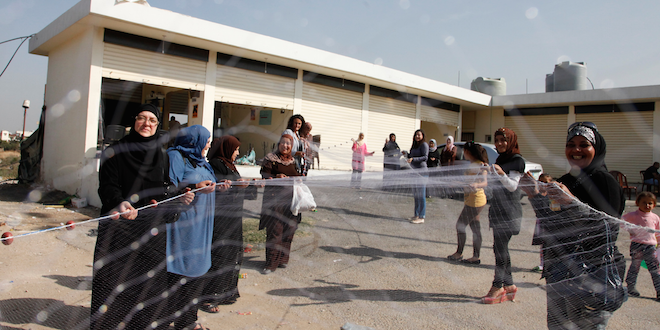 Syrian refugee women in northern Lebanon display part of a 100 metre fishing net that they've made, as part of a livelihoods training project supported by UK aid/Wikipedia photo by UK Department for International Development

How should we respond to migrants, refugees?

The recent refugee crisis has sparked national attention to the plight of refugees both at our borders and across the Atlantic. Much of the media has produced extensive coverage over the Syrian refugees making their way into European shores due to a years long civil war. However, mixed in with their stories are the stories of economic migrants, making a similar treacherous journey across borders also in search for hope of a life of something better.

Both these refugees, economic and political, set out to enter their host countries via similar journeys whether by a combination of foot, vehicle, sea or flight. Often times, both in the U.S and in many European countries, economic refugees are turned away from gaining asylum or work visas due to the threat of ‘straining the economic system.’ Where the economic refugees are seen as a threat in their host country, political refugees are more often welcomed, being granted housing, healthcare rights, and work visas. It is not only through the U.S and European immigration system that we see a bias towards political refugees over economic migrants but also in our national attitude towards economic migrants as seen through the media. Donald Trump (who is leading in the Republican national polls, by the way) painted a portrait of the stereotypes that some Americans hold of economic refugees with his controversial comments regarding undocumented Mexican migrants stating, “They’re bringing drugs. They’re bringing crime. They’re rapists.” The 1951 Refugee Convention the defined a refugee as “Owing to a well-founded fear of being persecuted for reasons of race, religion, nationality, membership of a particular social group or political opinion, is outside the country of his nationality, and is unable to, or owing to such fear, is unwilling to avail himself of the protection of that country.” This international law protects political refugees. But what protects the economic refugees?

This stark contrast in response to two seemingly similar groups of people is what unsettles me the most about the recent refugee crisis. How is it that we see one group of people as helpless and in need of our compassion and help while we view another as robbing our country? In Europe Union currently there is a large push for separating the economic migrants from the political refugees with plans for deporting those found to be economic migrants and creating a case for political refugees to seek political asylum.

There are two very different definitions for an refugee versus an economic migrant and two very different responses from the host communities they enter. Should not all refugees, economic or political, deserve to be shown compassion and care in the political system? Just think about it; refugees and migrants leave the comforts of family, culture, language, national identity, feeling of belonging, and community to make a treacherous journey because they see no hope in their own country. In essence, both groups are risking their lives and leaving their country out of desperation. Now the definition of an economic migrant implies that those who make this journey do it out of choice; according to the UN they are defined as those who “choose to move in order to improve the future prospects of themselves and their families.” But do you really have a choice when your children and family don’t have the basic necessities for living? These are people, who knowingly understand that they may die before finishing the journey they are about to embark on, but yet make the trek because they feel that they are as good as dead in their own country. Do not they warrant our compassion? Our care? And most of all, our attention? And what is our response as a community towards both migrants and refugees?

Join SpokaneFAVS for a Coffee Talk forum on “The Refugee Crisis” at 10 a.m. Oct. 3 at Indaba Coffee, 1425 W Broadway. Abbo is a guest panelist.

Gifti Abbo is a recent Whitworth graduate in biology currently working towards a career in medicine. She is also a second-generation Ethiopian-American raised in Spokane and is interested in issues surrounding racial and economic disparities both in Spokane and abroad. In her spare time she likes to read, hike and attempt to play the guitar.

Previous Sr. Simone Campbell, of Nuns on the Bus, coming to Pullman
Next The Roots of the Refugee Problem