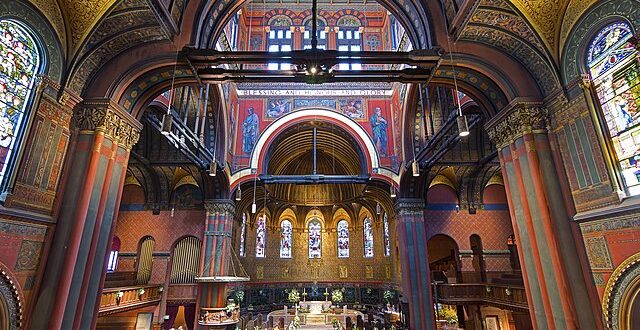 Many teenagers, I gather, fear to hear these words, hating to be held at home.

Many adults, methinks, would hear then with a sigh of relief.  Home at last.

On a recent tour of the magnificent Trinity Episcopal Church in Boston, my home town, our guide told us that we were grounded by its Romanesque architecture. Design in the 1870s by H.H Richardson, it was created as an alternative to the dominant Neo-Gothic style. While Gothic and Neo-Gothic churches inspired transcended spirituality with their towering spires, Richardson’s Romanesque church hugged the earth through its colors and shapes.

Like early medieval Romanesque cathedrals such as the one in Durham, England, Trinity Episcopal surprises us with the dark red and green shades of its walls and columns. Yes, there are brilliant stain glass windows glowing above, but the dominate tone is dark and earthy, creating a somber atmosphere, good for reflecting, for grounding ourselves.

Sitting in the middle of the church, we noticed that we were within a square surrounded by rounded arches and domes. Whereas late medieval Gothic cathedrals and modern churches are often fashioned after a Roman cross and so situate most worshippers in a rectangle, Richardson patterned Trinity Episcopal after the square Greek cross. A host of curves embrace this cross on all sides and from above.  We felt centered, as, I suppose, the Hopi may feel within their circular kivas and the Navajo within their round-domed hogans.

Our tour guide pointed out that Trinity’s superbly solid massive structure is actually held up from below by four gigantic logs, driven into filled-in marshland. Much of what is now Boston was once a salty bog.  While like most coastal cities Boston has to worry about flooding due to global warming, it also has to make sure that its foundational logs are kept wet as they will rot if exposed to air.

For some reason it pleases me to think that this huge stone building rests on wood sunk into mud. It reminds me of the Iroquois story about the earth riding on the back of a turtle. Our ground is alive and on the move—and we should be too.

We were so impressed by our tour of Trinity that we returned on Sunday for a worship service. Here our church experience was less centered, more linear and vertical. Our ears were drawn back by glorious organ music, our eyes drawn forward as a procession led to the altar. Then eyes and ears were both lifted up by choir singing, scripture reading, and preaching from the pulpit.

The preacher welcomed us tourists (probably more than half of the worshipers), but spent most of his sermon attending to the concerns of his flock and of the greater Boston community. Like many old city churches, Trinity must struggle to stay alive and relevant, to keep grounded.

One way Trinity is doing so is by attending to its history. The preacher announced that after the service the congregation would be meeting to discuss how best to make reparations. Though erected after the days of slavery, this church building was partly funded through old wealth derived from the slave trade in which New England participated and by slave labor. The molasses that flavored Boston’s famous beans was made by slave labor.  Slave labor picked the cotton that was woven into cloth by very profitable New England textile factories whose owners banked in Boston.

As historians have made clear, much U.S. wealth comes from the enslavement of Blacks. Unless we ground ourselves in this truth and work like Trinity Episcopal to make reparation, our nation does not stand on living, forward-moving ground.

Perhaps the days of such magnificent churches as Boston’s Trinity Episcopal are over. Some would say that the days of churches in general are over, especially those of liberal denominations with declining memberships. Still, I am grateful that during our visit to Trinity we were grounded so beautifully in worship and purpose.

Previous A Betrayal on Her Own Gender: Amy Coney Barrett vs. The Women of America 
Next The State of Christendom in American Contemporary Culture, Part 4