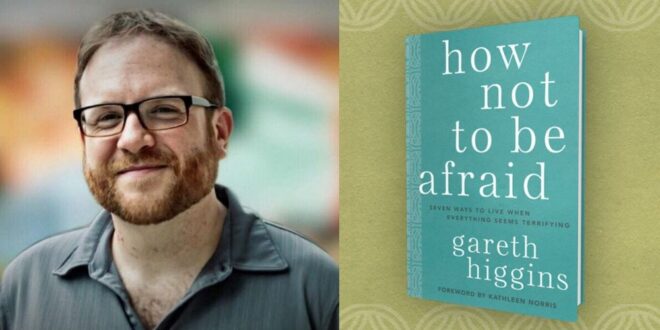 Author Gareth Higgins will be at the Friends Meeting House in north Spokane on May 29.

All of us experience fear. It’s as natural as breathing.

Dealing with our fears is part of navigating our lives — steered sometimes by a bit of guiding instruction.

“We have nothing to fear but fear itself,” President Franklin Delano Roosevelt told an economically-devastated nation fearing for the future.

“Nothing in life is to be feared; it is only to be understood,” world-renowned scientist Marie Curie said upon hearing of her leukemia diagnosis after years of working near radiation.

“Fear is not a life sentence, but a gift,” Irish scholar and author Gareth Higgins writes in the introduction to his book “How Not to Be Afraid: Seven Ways to Live When Everything Seems Terrifying.”

“Part of the gift only lives when it’s shared,” Higgins continues.

Of the three, Higgins is very much still with us — and will be in Spokane on Sunday, May 29, at Friends Meeting House in north Spokane to speak about his book and how we can tell meaningful stories about our fears and use them to strengthen community.

“Everybody seems to be afraid all the time,” Higgins said. “We are bombarded with more things than the brain can cope with. We have no time to develop stories.”

Higgins has experienced the gamut of physical, emotional and spiritual fear life has to offer.

Born in Belfast Northern Ireland in 1975, Higgins grew up in the time of “The Troubles,” a 30-year period of ethno-nationalist violence that engulfed Ireland, Northern Ireland and at times the United Kingdom and Europe.

Higgins notes in the book’s introduction that he tried to “compensate” for the fears of violence by joining a religious community that was at once “life-giving, progressive, confused and morally puritanical.” The result became fear of practically everything in his life, his home, country, his body and God.

But in his mid-30s, Higgins uncovered a way to live that utilized his fears as tools rather than elements to be overcome.

“Fear became a portal,” he writes. “A doorway to a more exciting, peaceful, useful, whole life.”

Fear “can positively motivate us in a new direction“

Higgins said it’s through recognizing fear and using stories to tell ourselves and others about how those fears impact us that helps us deal with fear. Rather than leading to fighting, running or paralysis, it can positively motivate us in a new direction.

“One thing you can do when you recognize your fear is ask others to help you,” Higgins said. “We can use it to nurture community, rather than overcome; (asking) how do we comfort each other and what are the things we can gain.”

Higgins earned a bachelor’s and doctorate in sociology from Queen’s University in Belfast. He helped teach the world’s first graduate course in Reconciliation Studies at Trinity College Dublin. He has also been involved in establishing a number of peace-building initiatives such as the zero28 Project in Northern Ireland, along with the “Wild Goose, New Story” and “Movies & Meaning” festivals.

Moving to Ashville, N.C., about 15 years ago, Higgins also founded The Porch Magazine. He has written extensively on religion and conflict, art and spirituality and film, with his work appearing in publications such as The Independent, The Irish Times, Sojourners and Third Way Magazine.

He has also co-authored books with U.S. theologian and author Brian McLaren that include the children’s book “Cory and the Seventh Story” and the adult-version companion book “The Seventh Story: Us, Them and the End of Violence.”

In Spokane, Higgins hopes to share stories, explain ideas in the book and have a conversation

The books he wrote with McLaren led the year-old group New Story/Spokane to invite and host Higgins presentation in Spokane as part of his book tour, which was delayed over a year due to the Covid pandemic.

Spokane pastor Roger Hudson, who helped start New Story/Spokane whose purpose dovetails nicely with Higgins’ and McLaren’s work, said Higgins’ work in establishing Porch Circles, small gatherings of people meeting to talk about their stories, also contributed to the desire to bring him to here.

“His message is so timely,” Hudson said. “People do feel afraid, hesitant to be involved. We hope his presence will inspire people in New Story and others to get involved.”

Higgins says involvement can be scary, but doesn’t need to be. Rather than trying to be activists in everything, we need to ask ourselves what our place and role in the world is and act according to our abilities.

“We’ve made simple things complicated and we’ve made other things simple,” Higgins said. “We’re not supposed to save the world by ourselves.”

In appearing in Spokane, Higgins said he hopes to tell some stories, explain his ideas in the book and have a conversation. With the latter, he said he is looking forward to learning about specific fears people have locally, and what stories they use to tell others about them.

“There will be some story telling on how to be afraid well, which might be a better title for the book,” Higgins said.

Gareth Higgins will be at Friends Meeting House (1612 W. Dalke Ave.) in Spokane at 4:30 p.m. Sunday, May 29. Everyone is welcome to attend for “an evening of storytelling and conversation about courage, creativity and community.”

Previous If you love the Bible and God, then love children. Live children.
Next Bishop’s Pen: Gun Violence