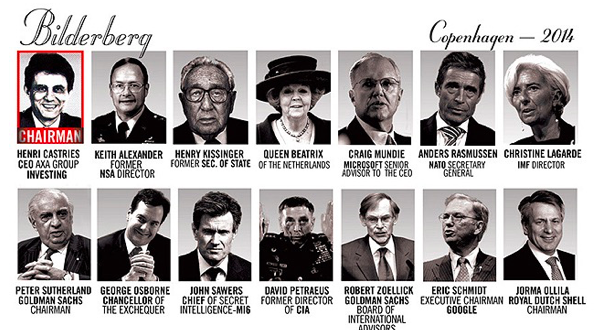 How many of you enjoyed attending this years annual Bilderberg Meetings?

If you weren’t able to attend did you at least enjoy the release of information and decisions made on the Bilderberg Group website?

No. You missed it huh. Just haven’t had the time? Don’t feel bad and don’t bother looking for any transparency or accountability on the website either. Since 1954 no one outside the Bilderberg Group knows what goes on when the world’s most powerful people lock themselves behind closed doors for three days of high-profile discussions.

Discussions are held under the strict Chatham House Rule – meaning that participants are free to use the information received, but neither the identity nor the affiliation of the speaker(s), nor that of any other participant, may be revealed.

That’s why the Bilderberg meeting is known as the world’s most secretive meeting. Don’t bother searching any forms of media for this year or any years high-lights either. According to the Bilderberg Meetings website, “participants are not bound by the conventions of their office or by pre-agreed positions. As such, they can take time to listen, reflect and gather insights. There is no desired outcome, no minutes are taken and no report is written. Furthermore, no resolutions are proposed, no votes are taken, and no policy statements are issued.”

So, why have the meetings in the first place if nothing is proposed or resolved?

“You know Bilderberg’s about to begin when you start seeing the guns. The Taschenbergpalais hotel in Dresden is filling up with pistol-packing plainclothes security as the last guests are ushered out. The frowning gunslingers head up and down the corridors with their hotel maps, trying door handles and checking the lay of the land while, down in the hotel lobby, corporate goons gather in muttering huddles.”
– The Guardian, Bilderberg: still powerful but perhaps a bit more anxious this year

Here are the key topics of this year’s meeting – according to the official Bilderberg website.

If you’re wondering how to attend next year’s meeting – unfortunately, one can only wait to be invited as there is no application. “Participants are invited because they can offer a different point of view,” according to the Bilderberg Meetings website.

I wonder what different points of view were offered this year by the chief executive officer of BP and the CEO of Royal Dutch Shell?

“All those finance ministers sitting round discussing the “geopolitics of energy and commodity prices” with the group chief executive of BP, the vice-chairman of Portuguese petroleum giant Galp Energia, and the CEO of Royal Dutch Shell. And then afterwards saying nothing to their respective parliaments about what they discussed. It’s so off-the-chart inappropriate that it beggars comprehension,” The Guardian read.

If you’re curious as to what was discussed and decided at this years meeting, then the next time you see Hillary Clinton you should ask her since she was one of the attendees. Although it kind of makes you go “hmm” when you realize that an unknown governor of Arkansas was also invited into the Bilderberg Group and attended the 1991 meeting. Less that a year later that same governor became the 42nd President of the United States.

The Bilderberg Group has been criticized for its lack of transparency and accountability since people became aware of it’s existence and the undisclosed nature of the proceedings have given rise to several conspiracy theories. What are your thoughts?

Previous Sravasti Abbey releases statement about Orlando attacks, call for compassion, gun control
Next Ask An Atheist: Would the world be better off without religion?