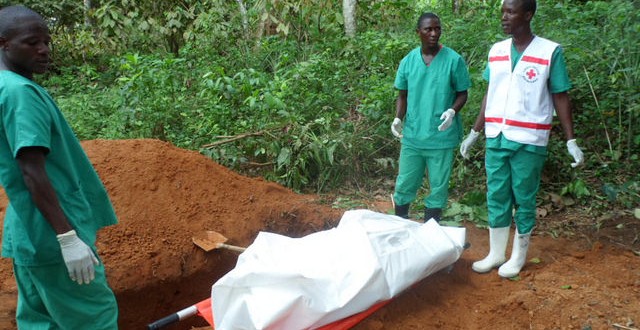 Ebola victim is buried/Photo by Global Panorama via Flickr

How Long Before Ebola Reaches Spokane; Let the Countdown to Eschaton Begin

I’m not so sure.  An argument can be made that ease is not the natural state of things, that corporeal existence finds itself in a condition of Dis-ease, in which case we can only hope for a cure, or perhaps for a negation of the pesky prefix.

Once upon a time the Bubonic Plague… the Small Pox Epidemic... the pervasive spread of Polio… Legionnaires’ Disease… Mad Cow Disease… HIV… AIDS… and now, Ebola.

Generation after generation has experienced a threatening affliction.  Medical dictionaries are replete with sordid symptoms and nerve-wrecking nuances.  On-line health care sites have can’t glean enough information to diagnose all the deficiencies and all the excesses to which our flesh and blood and bone seem heir.  Bacteria, resisting antibiotics, evolve into a fecundity of toxins.  Viruses mutate into monstrous strains.   And while feigning ease, we are limping and lurching fungus-infected footsteps toward that unforeseen day when, as poet W.S. Merwin says, “the last fires will wave to us.”

No, don’t worry, I’m not going to fixate on The Anniversary of My Death, a boundary in time that we cross and re-cross each year without knowing…, but I am going to expose the panic over Ebola for what it is.   Namely, the now infamous hemorrhagic fever is the latest and greatest mask of our terribly disturbed self-consciousness.   Take note of this blurb from The New York Times:

Here in the heart of the worst Ebola outbreak in history, the question of whether to touch a stranger has only one answer: You don’t. But even in more intimate circles, in families and among lifelong friends, Liberians are starting to pull away from one another, straining against generations of a culture in which closeness is expressed through physical contact.

Helen Cooper’s reporting on the tenuous state of affairs in Monrovia, Liberia (Oct. 4.) has more to say than we care to admit.  That is, even with a pharmaceutical remedy possibly in the works (as it has come for other diseases), the spiritual truth remains as dire as it was when Jesus came upon the victims of leprosy:  keep it over there, don’t let it spread here, take precautions, keep your distance…

And what all these italicized letters summon to our awareness is that we cannot get away.  The mysterious other — even in the form of a sibling, a parent or a child — connotes a contagion that will reinvent itself over and over again.  Meanwhile, neighbors threaten with neighborliness.  Estrangement creeps through the holes in the screen door.  Alienation on the cul-de-sac culminates with a new form of privacy fence, and remarks like these are the best we can do:  Can I borrow your leaf-blower?   Would you happen to have an egg so I can make an omelet?   I’m expecting a package from Amazon.  It may have been delivered to your house by mistake…

In Spokane, for example, affability and affordability go hand in leather glove.  In the Lilac City we mingle and make plans to meet at a Perry Street eatery.  Many of our places of worship are packed with patrons, if not old-style parishioners.  We travel in friendly caravans to Pullman and Puyallup…  But something tells me that if an infected “Thomas E. Duncan”  ever stumbled into the E.R. at one of our medical facilities, we’d begin to treat one another like the oozing and grotesque characters on “Z-Nation.”  We’d treat and run for the high hills!

To be clear:  I’m not saying that I do not love where I and approximately 500,000 souls make their dwelling places.  The density of the population here is wonderful.  The proximity to the Palouse and to the roaming wolf packs to the Northeast are the worthy stuff of storytellers like Marilyn Robinson, Jess Walter, Shann Ray and now Sean Vestal… Let’s rock this joint.  Let’s probe the depths of our regional intersubjectivity.  There are peculiar geographical features here that have shaped our dispositions, and all that is so good, I’m breathless.  But, given that beauty, over time I think we must confess some fractures in the landscape, and I don’t mean the Coolee Dam.  I mean the fissures in our psyches that cannot be overcome with anything but the Fullness of Time.

And if those last three words strike you as highfalutin cliche or nebulous non-sense — if they seem out of the blue sky on a Sunday afternoon in October — you might inclined to dismiss them.  Don’t.  Please.   Another way to envision the future here and elsewhere is to see each of its disparate threads as threading to some final tapestry.  Another mode of thinking about Ebola is to smell out the fear we share with those in Dallas, Texas, and now in New Haven, Conn. and the Newark International Airport.

Disease may be coming to a city near you, and that easily-predictable series of facts presuppose a continuum that we may have overlooked.  To be sure, it’s an ambiguous continuum.  But a nexus may be better than nothing at all.  “The anticipated future is already present in its anticipation,” writes the recently deceased Wolfhart Pannenberg, and when I read again his next words, I imagined a perspective on the deadly Ebola-viruses that seemed almost hopeful:  “The length of time granted to each creature can then be interpreted as an anticipation of the final completion that is expected from the future of God’s rule.  At that time, the creatures, despite their finitude, will participate in the eternity of God, at least to the extent that they do not close themselves off from that eternity” (“Metaphysics and the Idea of God“, p. 97).

How long do we have?  How long can we keep up our defenses against the onslaught of chaos that threatens our collective “ease?”  These are the wrong questions, floating like debris in an ocean of policies that promise security at all costs.   I say, enough.  I say with Jonah, pick us up and throw us into the sea.   A Great Fish awaits.