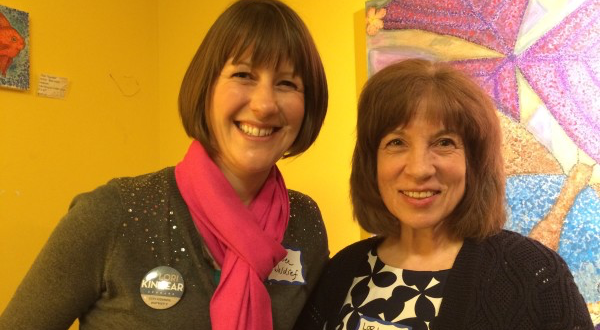 How Faith, Values, Culture Shape Our Leaders & Ourselves: A conversation with Lori Kinnear

I first met Lori Kinnear when she was a panelist at the Spokane Feminist Forum panel for women in politics and social justice in Spokane. I liked her from the first moment I met her. She comes across as one of those rare individuals whom not much escapes and who says a lot with very few words. She is insightful and the kind of common sense woman you want to know because she knows how things work.

Kinnear is intelligent, articulate and has a deep and practical grasp of how city hall works. Those who support candidate John Waite have said that John is an outsider, while Lori is an insider. Kinnear, while she is a fourth generation Washington native, spent time in California before coming back to Spokane and her native state. Anyone who has moved elsewhere or lived elsewhere from Spokane knows what it is like to be an outsider, and that you have to gain the trust of the community and those you work with to get anywhere.

Kinnear has gained the trust of the community and her colleagues at city council as can be seen from her endorsements. She is endorsed by Amber Waldref and Richard Rush, who she worked for as a legislative aide before this. Kinnear is also endorsed by everyday people: many local unions have endorsed her, including International Union of Painters & Allied Trades AFL-CIO #5, Amalgamated Transit Union Local, 1015 Spokane Regional Labor Council and many more local organizations.

Kinnear has had to worked not just hard, but smarter, to be where she is. She has successfully began and worked on many projects and brought them to fruition, such as the community gardens project. This is one reason many people who have voted for and endorsed Lori, choose to do so – they’ve seen her quiet, decisive work in action.

She has been, unlike John Waite and LaVerne Biel, to every city council committee meeting. She is currently council member Amber Waldref’s aide.

Layne Pavey, who is a community organizer, has remarked that getting an audience with Kinnear as Waldref’s aide regarding Smart Justice was a bit challenging on occasion.

When I asked Kinnear how leaders hold themselves accountable, her reply was, “Listen to your constituents, show up to work, come prepared and knowledgeable.”

Kinnear is endorsed by the National Women’s Political Caucus of Washington. Not only that, but she specifically has been an adviser at the Women’s Business Center to women seeking entrepreneurial skills.

“My stand on gender equity and human rights issues is clearly supportive,” Kinnear has stated to me before, simply, strongly and without question.

Kinnear, at the NAACP and League of Women Voters Forums, came across as an individual with integrity who holds herself accountable and is aware of the issues of equality and social justice and how these are influenced and can be changed for the better at a local level.

Whereas John Waite, in response to a question from the NAACP, did not know that the city had funds which could be allocated for non-profit funding for mental health programs — and mental healthcare is part of his platform — Kinnear did. She said she works to make sure city funds allocated for non-profits are put to good use, and would continue to do so as an elected official at city council.

When candidates were asked at the NAACP forum about experiences with racism, Kinnear replied that she had seen it in Palo Alto and in Spokane, and would work with the NAACP to ensure the city moved forward together progressively on this issue of equality.

When I asked how we can hold our leaders accountable, Kinnear replied that each candidate has a track record that everyone should pay attention to.

After the League of Women Voters Forum at City Council, I asked Kinnear what she thought defined a “real leader,” since that was John Waite’s slogan — Bringing real leadership to Spokane. It seemed like she should have a chance to answer that.

“A true leader gets things done. If people support you (without the leader essentially putting themselves in the position and proclaiming themselves as such), this identifies you as a leader,” Kinnear said.

“That sounds Buddhist,” I replied.

“It does.” She said, and smiled that wise smile of hers I like so much.

“What is your personal approach to leadership?” I wondered, since her slogan is “Let’s Keep Spokane Moving Forward,” what that meant to her.

“When I share my vision, as in the case of the Spokane Community Gardens, people see my passion and want to be part of the vision. I have also been Vice Chair of the Friends of the Centennial Trail. When people can identify with your passion, they want to share it and you can lead them.” Kinnear answered.

I asked Kinnear lastly that evening, “What happens when that trust in a leader is broken?”

“Then that is not true leadership.”

Previous Free clinic serves hundreds in Spokane
Next Ask a Jew: Why are there different sects of Judaism?