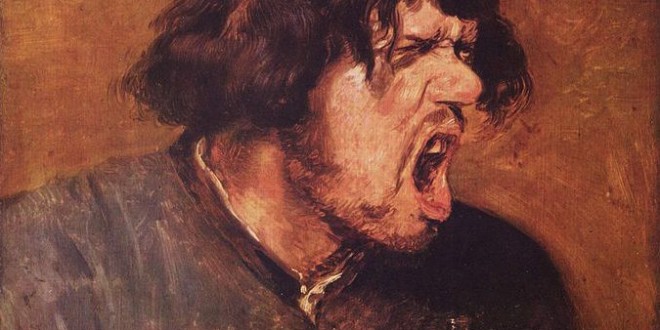 Adriaen Brouwer's The Bitter Tonic, depicting a man's response of disgust to a beverage

How disgust can be a healing thing

It is good for your heart but the smell of Natto or fermented soy beans has been described as something akin to summer socks worn too long then accidentally dropped behind the washing machine and left to mold for several weeks. I think it is disgusting but the funny thing is in Japan, where it is commonly eaten people either love or hate these little brown beans that drip slime when you lift them up to eat them. No one in Japan says, “Natto, yeah if it is there I will eat it but I am not so fond of it.” People either say, “It is the most disgusting food ever” or they say, “I love Natto it is my favorite food.” There is not a common consensus on whether is id disgusting or delicious.

Disgust, it turns out, is a very personal but also often cultural value. Sometimes we call people who take pleasure in something we find disgusting, “ghoulish” or “sick” but they are just making different choices. Is there really anything that is inherently disgusting that all seven billion of us could agree to call disgusting?

It turns out that our ability to notice if something is disgusting relies on parts of the brain known as the basal ganglia and the insula, according to H. A. Chapman in the Annals of the New York Academy of Sciences. A sense of balance, smoothly controlled movements, such as walking are also guided by the basal ganglia. People with a diagnosis of Huntington’s Disease lose both the ability to walk and move in a smooth controlled way and the ability to recognize disgust. Parkinson’s disease and a lack of dopamine also affects the function of the basal ganglia and which contributes to tremors. Exercise and movement has been shown to light up the basal ganglia and slow the deterioration of this part of the brain. Imagining something’s disgust also lights up the basal ganglia. What if a set of disgust exercise can bring more consciousness to what a person finds disgusting and the flip side delicious could help balance out brain function?

Here is my thesis based on client results: spending a few minutes a day thinking about a disgusting food can light up, bring better blood flow and function to the basal ganglia, resulting in better movement and brain health.

What disgusting thing have you eaten lately? Come on, we have all eaten disgusting bits of food or even done something disgusting. But did you know, disgust is actually considered a beneficial emotion, sometimes saves us from food poisoning and helps us sort out what is true in our lives? And if this is an average day in the United States, 13 people will die from food poisoning.

Recognition of emotions is also tied to our ability to recognize patterns — the way someone’s mouth turns downward and their head leans away when they are confronted by something disgusting. Pattern recognition skills needed to experience and identify disgust in the faces of others is compromised in people with brain dysfunctions like depression, Huntington’s Disease (a genetic movement disorder), focal dystonia (unusually tight twisted muscles), Parkinson’s (tremor movement disorder), and Wilson’s Disease (genetic copper processing disorder).

Consciously considering what is disgusting is one way to help heal the brain. Think of disgust exercises as weight training for your brain.

In addition to your brain’s culinary ability, researchers Sam Harris, et al in 2008 Annals of Neurology noted another function of the basal ganglia. “The difference between believing and disbelieving a proposition is one of the most potent regulators of human behavior and emotion.” Whether we accept something as true or reject it as a false string of words, depends on the health of our brain. Continuing he says, “truth may be beauty, and beauty truth, in more than a metaphorical sense, and false propositions may actually disgust us.”

Ralph Waldo Emerson, American poet, lecturer and essayist put it this way, “Evermore in the world is this marvelous balance of beauty and disgust, magnificence and rats.”

Disgust Exercises: Using the Mind to Heal the Brain

1. What is the most disgusting food you have ever eaten?

2. What foods do other people like that you find disgusting?

3. What was the last disgusting smell you experienced?

4. What has a disgusting feeling (touch) for you?

5. Whose face did you see with a look of disgust most recently?

6. If you imagine someone offering you something that looks disgusting, how will you respond to them?

On England and the English, George Orwell, English Novelist said, “As a rule they will refuse even to sample a foreign dish, they regard such things as garlic and olive oil with disgust, life is unlivable to them unless they have tea and puddings”