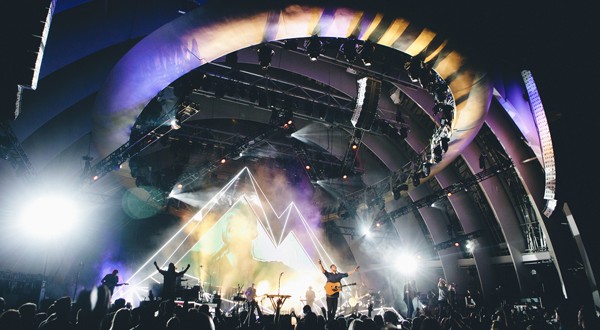 Joel Houston of Hillsong UNITED performs before more than 15,000 people at the Hollywood Bowl in June 2013. For use with RNS-HILLSONG-30, transmitted on October 31, 2013, Photo by Andy Barron/courtesy Merge PR.

How Christian music helped me

Being fairly new to Christian music, I haven’t had the opportunity to see how it has evolved over the years. When I first became a Christian a little over two years ago, my mentor handed me a mix CD that she had personally created for me as well as a “Jesus Calling.” I knew nothing about reading the Bible, I didn’t even know Christian music had its own genre, or how the Psalms are actually songs.

The following Monday, I put that CD in my car before I headed to school and was able to listen to a few of the songs before I arrived. It was definitely different for me, I grew up listening to mostly obscene music and truthfully I was even a little surprised that I found myself liking the songs.

As I began to read my Bible with my mentors help and I started falling in love with “Tenth Avenue North,” the hole I had been feeling inside myself for several years started to fill up. I knew this was a step in the right direction for me, because not only was I so eager to learn more and more about God and to have an intimate relationship with him, but I began starting to pray to him without even realizing it.

When I moved away to college and could no longer have our Wednesday night Bible Study with my mentor, I stayed in touch and continued to expand my faith by attending church with her sister here in Spokane. By that point, I was mainly listening to Christian music and was able to sing along at church when the worship team would play a Hillsong United tune.

Fast forward to a few months later when I was at the lowest point in my life, I felt like all I had for certain was my Bible and Christian music. Christian music made me feel like it was OK to feel the way I felt, but also that I was going to be able to come out of it stronger, like it was a test from God.

I know for certain that I wouldn’t be the Christian I am today if Christian music didn’t exist.

Join SpokaneFAVS for a Coffee Talk forum on “Faith and Music” at 10 a.m., May at The Community Building, 35 W. Main Ave. Kinnaman is a panelist.

Eliza Kinnaman grew up on the west side of Washington State, not far from the ocean waves. She is currently a sophomore at Eastern Washington University, where she is pursuing a degree in communications with a minor in journalism. She is engaged to the love of her life and works a part time job in Spokane. When she isn't busy she loves to go on hikes, bake and cook with her fiance. If doing none of the above, you can find her with a book in one hand and a cup of coffee in the other.