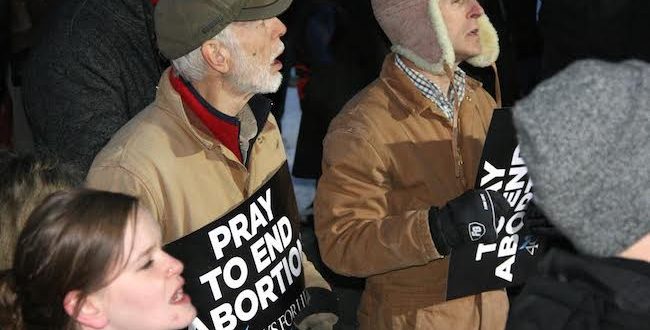 How abortion became such a divisive faith issue

On Wednesday, Alabama governor Kay Ivey signed into law major restrictions on abortion with no exceptions for pregnancies caused by rape or incest. Multiple other states have also passed “heartbeat bills” banning abortions after the detection of a fetal heartbeat. With the widespread passage of such bills and efforts to have Roe v. Wade overturned by the now conservative-majority Supreme Court, it is worth considering the history of Jewish and Christian teachings on abortion and how it has become such a divisive issue.

The Christian organization Focus on the Family bases its anti-abortion stance on the sanctity of human life and dignity of every person: “We believe that human beings are created by God in His image. Therefore every person, from conception to natural death, possesses inherent dignity and immeasurable worth.” Likewise, the Catholic church teaches that “Human life must be respected and protected absolutely from the moment of conception,” and therefore “You shall not kill the embryo by abortion and shall not cause the newborn to perish.”

These statements assume that life begins at conception, but this is a modern understanding of human development. According to Jewish law, a fetus is not considered a person until birth. Exodus 21:22-23 reads, “When people who are fighting injure a pregnant woman so that there is a miscarriage, and yet no further harm follows, the one responsible shall be fined what the woman’s husband demands, paying as much as the judges determine. If any harm follows, then you shall give life for life” (NRSV). According to medieval Bible commentator Rashi, this means that causing an accidental miscarriage is equal to accidentally injuring the mother – not killing the fetus. This is the widely agreed upon interpretation among Jewish Bible commentators, none of whom “raise the possibility of involuntary manslaughter being involved because the unborn fetus is not legally a person and, therefore, there is no question of murder involved when a fetus is aborted.” The Mishnah states that “If a woman is having difficulty in giving birth [and her life is in danger], one cuts up the fetus within her womb and extracts it limb by limb, because her life takes precedence over that of the fetus. But if the greater part was already born, one may not touch it, for one may not set aside one person’s life for that of another.”

Christian publications in recent times, such as a 1968 Christianity Today article by Bruce Waltke, affirm this interpretation of Exodus 21:22-23. The consensus at this time was that life began at birth with first breath rather than at conception. In his 1973 book As I See Sex Through the Bible, Robert L. Pettus Jr. argued that life begins at breath since Adam received life from the breath of God. In fact, the Hebrew word often translated as “soul” in Christian translations of the Bible, נפש (nephesh) means most properly “a breathing creature” and can be translated as “life,” “breath,” “neck,” “throat,” or “self.” This suggests a close connection between the ancient biblical notions of breath and personhood.

How, then, did anti-abortion stances become a hallmark of evangelical and Catholic churches? The landmark ruling on Roe v. Wade in 1973 was, of course, a major moment in this history, but this rallying was also an intentional mobilization by leaders of the Religious Right in response to the 1972 case Green v. Connolly in which “the court declared that neither IRC 501(c)(3) nor IRC 170 provide for tax-exempt status or deductible contributions to any organization operating a private school that discriminates in admissions on the basis of race.” Losing access to tax-exempt status for racially discriminatory Christian schools outraged many Christians and led to the galvanization of the Religious Right. One of the leaders of the Religious Right, Paul Weyrich, took advantage of this newfound unity amongst conservative Christians and used the passage of Roe v. Wade as a rallying point.

This concern for harnessing the political power of conservative Christian Americans is still central to the anti-abortion movement, as we can see in the passage of these restrictive laws. When Gov. Ivey signed in the new Alabama law on Wednesday, she acknowledged the political motivations for passing the law: “The sponsors of this bill believe that it is time, once again, for the U.S. Supreme Court to revisit this important matter [Roe v. Wade], and they believe this act may bring about the best opportunity for this to occur.”