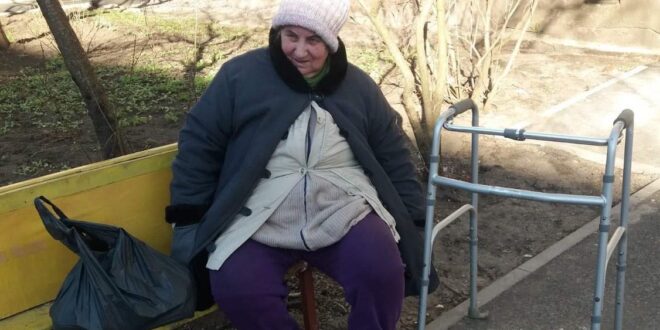 A disabled woman receives a bag of food. / Contributed by URC

Editor’s Note: The Ukraine Relief Coalition of Spokane is made up of individuals from various churches. URC’s main leader is Pacific Keep Church pastor Boris Borisov. Another member of the URC team grew up with Yakov Siromatnikov, who this story is about.

Before the war, Yakov Siromatnikov had completed a law degree and owned his own HVAC business. When the war began, Siromatnikov knew he had to evacuate his wife and young children, but he felt led to stay back and help deliver humanitarian aid supplies to those in desperate need. In a video call with URC, Siromatnikov spoke a well-known local adage: “Святое место не бывает пустым” It translates to “A holy place isn’t left empty,” which means Siromatnikov knows that if he wasn’t doing the work he is, someone else would step up to fill his place. At the same time, he believes there’s a reason why he is where he is now.

Currently, Siromatnikov oversees a camp in northwestern Ukraine of over 100 “resettlers.” This group prefers to call themselves resettlers, rather than refugees. It consists of families who have sought refuge from Russian shelling and artillery fire, which has more frequently occurred in southern and eastern Ukraine.

At first, the campground was home only to the director and his family. Then, one family asked if they could come stay at the campground. Then another followed, and then another, until the camp leaders decided to open the grounds to any families fleeing hot zones and evacuating occupied regions. Not all of the families at the camp wanted to leave their homes, some staying until the last minute. One family had a missile strike their home, and shelling debris narrowly flew over their young son’s head, just barely missing him. That was the moment they realized they had to flee.

“We’ll Help Those We Can”

Whereas previously Siromatnikov would charge his phone once a day, now he charges it three times, managing many phone calls and transfers. During the first few weeks of the war, Siromatnikov slept for an average of five hours per night. When he and a friend got into a car accident as a result of chronic fatigue, Siromatnikov realized he couldn’t help everyone in Ukraine, but instead decided, “We’ll help those that we can.”

All the members of the camp have a role, either helping haul and repackage humanitarian aid supplies or cooking and preparing the three daily meals of the camp in the kitchen. When shipments of aid come in, everyone stops what they are doing and runs to help unload.

Shipments are supplied mainly from Poland, Sweden, Germany and Norway. The camp itself is sponsored by one generous American donor, and the fuel expenses of the delivery drivers are sponsored by other American benefactors.

Additionally, Siromatnikov’s team collects donations that they use to purchase additional food and medical supplies. Their work has even caught the attention of a government official who is second-in-command to President Volodymyr Zelenskyy. This official took time to visit their camp and oversee their efforts.

Siromatnikov explained that it’s most efficient and cost-effective for European countries to supply products and aid, rather than shipping in aid from overseas, which is a lengthier and more expensive process. The respective European countries arrange to meet Siromatnikov’s team members at the borders. Then, members pick up the supplies and bring them to the camp. At the campsite, the supplies are sorted and packed into more manageable kits, which are redistributed to a network of eight verified churches that oversees 500-700 people in need.

Accountability Is a Priority

Accountability is very important to Siromatnikov and his team. Several times during the video call, Siromatnikov explained the process by which they ensure all the supplies arrive where they should. When they receive supplies from the European countries, team members take photos of all the products and send the photos to the suppliers. When Siromatnikov’s team distributes packages to their trusted church network, the churches take photos of the packages and send them to Siromatnikov’s team. The churches are also required to photograph the distribution of the packages to those in need. Through this multiple-step verification process, Siromatnikov’s team protects supplies from being stolen and resold on the market.

Elderly and Large Families Are First

Siromatnikov’s team focuses its efforts on hot zones, areas under heavy shelling, or recently liberated regions. The elderly, those with disabilities and large families with many children take first priority. Siromatnikov shared that even before the war, many of the elderly in Ukraine relied on a meager government pension equivalent to roughly $100 per month. Now, with inflation, prices have gone up 2-3 times. Many of the elderly population are living week to week, in destitute conditions, not knowing when their food reserves might run out.

The bulk of the supplies that come in are pasta, grains, instant soups, canned meat and fish, grains, oil, tea, water, other non-perishables and medicine and medical supplies. If, on a given day, Siromatnikov’s team receives several tons of pasta, they balance that by locally purchasing an equivalent amount of canned meat. As a result, when they distribute the products, people receive complete meals, rather than simply bags of pasta or cans of protein.

For 90,000 Ukrainian hryvnia, which is roughly equivalent to $3,000, Siromatnikov’s team can supply their network of 500-700 people for several days. On the day that URC spoke with Siromatnikov, the camp had sent five tons worth of food and aid to Kharkiv and two tons to Zaporizhzhia.

The Gratitude Is Immeasurable

“The look in their eyes, on their faces, when you deliver the food … you have to see it, but it’s better never to have to see such things,” shares Siromatnikov, implying how difficult it is to put into words the gratitude the recipients of their aid feel. And, at the same time, wishing that no one would have to experience the kind of suffering these victims of the war have.

It’s a level of anguish Siromatnikov has seen firsthand. Driving through his hometown, seeing his childhood school demolished, homes destroyed, being shown the basements where residents hid from shelling and watching fire still smolder from 16-floor apartments that were hit by missiles several days ago.

“You see what war is like on TV, but you cannot relay it when you see it in person,” Siromatnikov described.

In one of these apartments, the building had an expansive hole through the center of it, caused by an artillery strike. Half of the residents had perished as a result.

Members of the camp keep each other’s spirits up by attending church services together and sitting around a small furnace, playing music and singing. Remarkably, on February 24, the same day the war began, the camp director’s wife gave birth to their son. They named him Elmir, which is a Swedish name meaning “God’s peace.” When the camp director walks around with his son, he jokes, “Everything will be alright. I have God’s peace with me.”

Siromatnikov shares that as the war has progressed, both donations and supplies have declined. At this point, Siromatnikov says that “any help is welcome,” but the most effective help to their team is receiving supplies from bordering European countries (this keeps costs low) and collecting donations, which they then use to locally purchase additional necessary goods.

After the war, Siromatnikov plans to move to the U.S. with his family and reunite with old friends. With the specific kind of distortion that only memory can bring, Siromatnikov hopes he and his friends will drink tea and look back, remembering these times as easier than what they are now.

Previous Joy in One’s Race and Culture
Next FPIW leader to step down, run for Secretary of State