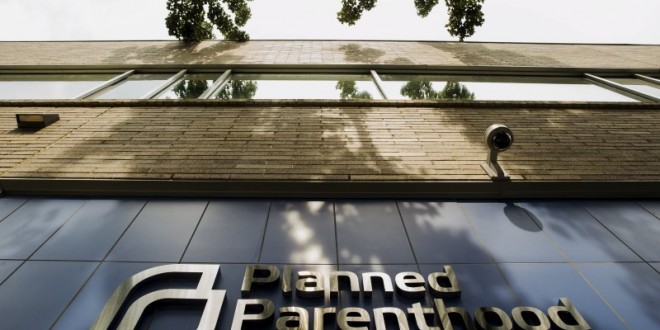 A sign is pictured at the entrance to a Planned Parenthood building in New York August 31, 2015. REUTERS/Lucas Jackson

WASHINGTON (Reuters) – U.S. House of Representatives Speaker John Boehner said on Thursday the goal in negotiations over funding for Planned Parenthood was to avoid a government shutdown on Oct. 1 and also to stop the sale of “baby parts.”

“The goal here is not to shut down the government. The goal is to stop these horrific practices of organizations selling baby parts,” Boehner told reporters.

Boehner, however, stopped shot of guaranteeing that any government shutdown would be averted.

Conservatives have pushed to cut off federal funding for Planned Parenthood as Congress works on a stopgap funding bill for the federal fiscal year beginning Oct. 1.

Democrats have made clear, however, that a Republican attack on Planned Parenthood’s funding, which totals more than $500 million a year, would likely prompt a veto by President Barack Obama. That in turn could lead to a government shutdown.

Demands to cut funding for Planned Parenthood follow the online release of secretly taped videos that show technicians for the women’s healthcare provider handling fetal tissue after abortions. Planned Parenthood has said it has done nothing illegal.

Some conservative Republicans, unhappy with Boehner’s leadership, are making the Planned Parenthood funding fight a test of his leadership. Some have even threatened to try to strip him of the top House job.

Besides Planned Parenthood funding, Republicans and Democrats have serious disagreements over broader budget questions for the coming fiscal year, including whether to lift tight spending caps on a range of domestic programs.

Since 2011, when Republicans took control of the House from Democrats, the two parties have repeatedly clashed over tax and spending priorities. In October 2013, many government agencies were forced to suspend their operations for more than two weeks after Republicans tried to kill Obama’s landmark healthcare law by attaching it to an annual spending bill funding Washington.

Previous Do you have a big but?
Next Our Sin Causes Global Warming

Hmm “selling dead baby parts” OMG!! who are these monsters. (Insert Godwin’s Rule of Nazi Analogies -https://en.wikipedia.org/wiki/Godwin%27s_law) or Donald Trump comparison, or that guy that lives two house down from me and is always getting into loud arguments with his thumb. Evil I tell you absolutely evil!

Has Boehner followed any of the reporting related to PP’s lack of wrongdoing? Or is he simply selectively filtering out the investigations? This is such political theatre.