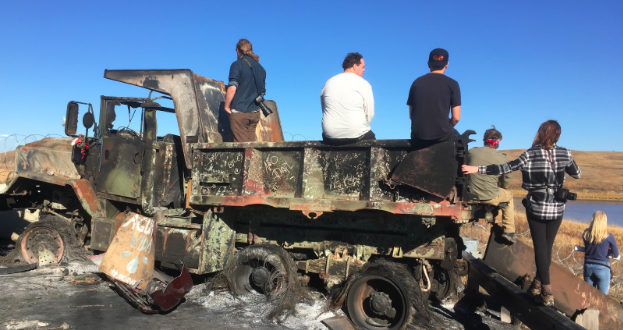 Hope vs. Fear at Standing Rock

I recently returned from a short trip to join the water protectors at Standing Rock, North Dakota. For an overview of the situation at Standing Rock check out this article. The post below describes some of my main takeaways from my time there.

There is a battle going on in North Dakota, but it isn’t between two militarized forces.  It is between love and hate, hope and fear, hospitality and hostility. The battle being waged is just one of many fronts of the age-old war between the indigenous way of life and colonial violence and death.

It’s impossible not to notice the life in the camp. It’s such an active, driven atmosphere, yet there is an intentionally spiritual undertone in everything. You can hear the singing and drumming by the sacred fire most all of the time, and at night is when the drumming is the most persistent, forming the heartbeat of the camp. Prayer is central to nearly every act in camp life. Prayers over every meal. Forgiveness ceremonies, blessing ceremonies, prayers over the waters, over the campers, over the water protectors, over the police.

Whenever you gather at the sacred fire, you hear of forgiveness and reconciliation. Yes, you also hear of resistance and perseverance. But overwhelmingly the message is one of hope and love. “We are the answer to the prayers of our ancestors,” says a young Lakota woman who I can only describe as a prophet. She speaks of the pipeline’s investors having a strong, militarized force but the water protectors having the only weapons of any real strength. “We will not take up the colonizer’s weapons of violence against them,” she says. “We will take up the weapons of truth, compassion and faith.”

Yet less than a mile up the road is the wreckage from the conflict on Oct. 27. That was when military-grade vehicles were burned and 141 water protectors were arrested when the North Camp was cleared out. A man who was arrested told me that the vehicles were set on fire by the police or pipeline security, who then blamed the water protectors for the fires.The scene on the bridge now looks like the backdrop for a war movie. The broken glass, the charred railings, the ash and soot all with concrete barriers and razor wire in the background.

At night the police shine huge floodlights all along the river and the bridge, along the dividing line that the water protectors and the police have agreed to not cross. There are constant patrols throughout the hills surrounding the river, guaranteeing no water protectors will enter the private property where the North Camp had been located. All of the roads into the area are blocked save the southbound side of Highway 1806, which leads to the Two Spirits camp where we stayed. All other roads have road blocks with police in riot gear and National Guard members in camo, standing beside police SUVs and military Humvees, stopping all travelers and redirecting them.

The contrast is stark. It reminds me of photos from Vietnam war protests where a woman offers a daisy to an officer who has his gun aimed at her. When I speak with one of the water protectors, he remarks that you can tell that some of the police and pipeline security are receptive to the messages of love and reconciliation while others are hardened against them. He says that while he was being arrested, he told those arresting him, “We love you brother, we love you sister,” and some responded with a softening and a look of compassion, while others responded with a firm look of anger, hardened at the sign of forgiveness.

Talking with a Lakota man, I ask: If the people prefer to be called water protectors, not protestors, then what is the action called? What is the group called? If I don’t refer to the resistance as a protest, then what word can I use to describe it? He tells me the reasoning behind using the term water protectors: The term protest is inherently violent in nature. He speaks of how the word generally mistranslated as warrior really means protector, someone who will physically stand in the way of harm to protect the sacred. And that is what this movement is about: standing in the way of something that will harm the sacred. He speaks of how colonization is also a violent process. That the idea of owning land, claiming possession over something so communal, is inherently violent.

He gives as an example the way the Lakota people of the area refer to this river that joins the Missouri River as compared to how the pioneers referred to it. Both ways reference the large, spherical rocks that were once naturally formed by the river’s flow. (The river has long since stopped making the rocks due to the Army Corps of Engineers altering the flow of the river.) The Lakota essentially call it “the place where the sacred rocks are made.” It’s not a name, since to name something takes ownership of it and you can’t own something sacred, you can only witness it. So when they refer to this spot, they are simply referring to the place where something sacred happens.

Then early western explorers and eventually pioneers entered the area and named the river “Cannon Ball River,” as a means of claiming it as their own and taking it from the tribes who had lived there. And of course the name itself is referencing violence and a means of colonization, as cannonballs are themselves symbols of violence and oppression.

Eventually I press him by asking more directly, “I need a noun. If I shouldn’t say ‘protest,’ what should I use instead? A resistance? A movement?” And he smiles at my persistence and says, “I don’t see why you can’t call it a ‘gathering of water protectors.’” And I smile, thinking that’s a bit of a mouthful.

As I write this in the days following the election, the mission of the water protectors looks bleak. President-elect Donald Trump has significant financial investment in the pipeline, ensuring that he will stand on the side of builders if he ends up having a say in how this is resolved. And the Obama administration is looking into any possible compromises that can be made, but the tribal leaders have said that any solution that involves the pipeline crossing the river isn’t a solution from their end.

Many civil engineers have gone on record to say that, while pipeline leaks are problematic, the pipeline is the safest way to transport the crude oil. And while, according to the Army Corps of Engineers, all construction is supposed to be stopped for 30 days, the pipeline developers are rumored to plan on resuming construction in the next nine days, with or without permits. And now there are military-style walls with razor wire surrounding the construction site in addition to the patrols to prevent the water protectors from standing in the way of the bulldozers. So it appears that those gathered at Standing Rock may well lose this battle.

But I do take comfort in the fact that while I was at Standing Rock, over 500 clergy and laypersons from all faiths gathered at in solidarity for the mission of protecting our Earth, our resources and our indigenous peoples.

There are thousands of people gathered there in prayer and community working to protect the Earth and defend the oppressed. While it may seem like the country has never been more divided, there are people who have traveled countless miles, from all pockets of this great land and from around the world, to stand united. Though there are those who wish to tear our country apart with violence, peacemakers are standing up against violence and responding with love and forgiveness. And together we can win this war. So one day we won’t have to say Native lives matter, because it’ll just be an understood fact.

Liz Schindler grew up always wanting dreadlocks. Raised in a Christian household with Quaker roots, she has always been intrigued by hippies, communal living, and social change. Now, as a mother in an interfaith household, she is passionate about queer inclusion in Christian spaces, encouraging creative play in children, and hospitality. She is still devoted to activism and is currently interning for SpokaneFāVS. She lives on the line between gentrification and poverty in West Central with her husband, Neal Schindler (also a FāVS writer), son Oliver, and their two cats (who, let’s be honest, are the ones who own the house).

Previous Pope Francis challenged on family teachings
Next Spokane, where was your righteous anger before the election?

Through FāVS, I have learned by valuing someone’s faith or non-faith journey, I am, in turn, showing them I value their dignity as a human being, without feeling like I need to diminish my own faith practice.