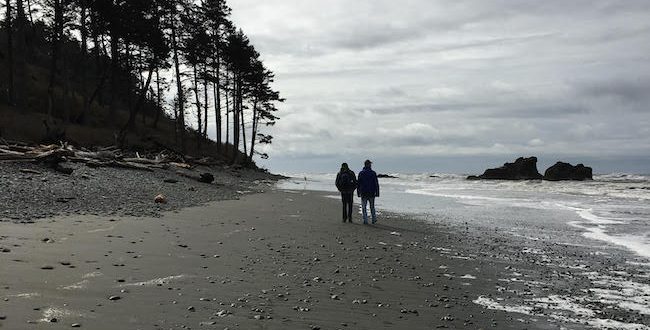 Photo of couple walking on beach by Jody Cramsie/SpokaneFāVS

For the last several months I’ve been like the silver ball in a pinball machine, ricocheting wildly between something like optimism and despair.  Then, a couple of weeks ago, the movements slowed and finally stopped —At despair.

A witch’s brew of the ongoing political crises, Covid-19 stalking us all, economic instability, the abrupt dislocation of lives, loves and relationships, and the quiet personal issues winding through it all finally exhausted and overwhelmed me. I was exquisitely aware of where I was, and that I was unable to extricate myself. I confessed to my brother that I thought I was having a slow-motion nervous breakdown.

I’m beyond fortunate to have a brother who loves and understands me. He sprang into action (from his current residence in Beijing) and had two books delivered to me from Auntie’s Bookstore. He thought they might help.  The first was “Hope in the Dark” by Rebecca Solnit. A rather ambiguous title, I met this gift with my default skepticism surrounding the word “hope.”

Hope? I’ve never had a very good relationship with hope. First, I haven’t much experienced what I heard others describe as hope; I’ve been better acquainted with despair. Second, my own understanding of hope usually included various iterations of the following: passive; waiting; relying on something or someone else for the wished for outcome; magical thinking; detached from reality; lack of personal control and action; a pipe dream; and flimsy.  In short, it just sounded silly and foolish to me.

Nonetheless, with full faith and trust in my brother, I quieted my initial skepticism and plunged ahead.  Three-and-a-half pages in, I read:

Hope locates itself in the premises that we don’t know what
will happen and that in the spaciousness of uncertainty is room
to act.  When you recognize uncertainty, you recognize that you
may be able to influence the outcomes . . . Hope is an embrace of
the unknown and the unknowable, an alternative to the certainty
of both optimists and pessimists. . . . It is the belief that what we
do matters even though how and when it may matter, who and
what it may impact, are not things we can know beforehand.

Wow. Nothing could be further from my previous thoughts about hope.  This hope isn’t flimsy or passive or wishful thinking.  And more than that, it grounds itself in the affirmation of uncertainty – another idea that I would never have put in the positive column. Never in my life have I considered uncertainty a “good” to be embraced!

The rest of the book continued to make the case for this muscular version of hope through the use of research, anecdotes, and a reframing/redefining of success and failure throughout history. Solnit, an historian, argues that hope relies on imagination and a full appreciation of the complexity of history.  She states that hope is to give yourself to the future, and the commitment to the future makes the present inhabitable.

My new understanding of hope now includes the following: personal agency; a method for making meaning in our lives; tolerating unpredictable outcomes; living with an open heart; a realistic assessment of the facts of a situation; persistence; danger; and a grounding in an underlying confidence in the abiding worth of our lives. In short, not silly or foolish.

I now believe hope has an honored place next to that other unusual action verb:  love. Both sound like soft and dreamy feelings upon which we float happily and serenely.  In fact, they are action verbs often masquerading as passive feelings.  Their richer understanding is that of powerful action requiring courage, persistence, a sturdy and firm kindness, intelligence, and compassion. Love and hope.

The present/status quo was once the uncertain and unknown future. It was the courage required for hope in the past that created the possibilities and realities of our “now.” We are the beneficiaries of the brave hope of those who came before us.  We are standing on their shoulders. We have a responsibility to the next generations to accept the difficult but rewarding challenge of hope in the here and now. We simply cannot squander this precious inheritance; we must build on it and pass it on.

My brother was right. The book helped me get moving again (but not ricocheting wildly). I’ve made the choice to move into the uncertainty with hope. Real hope. And I hope it works.

Previous Ask An Eastern Orthodox Christian: Heaven and Hell
Next A Lesson in Cancel Culture from Dr. Seuss