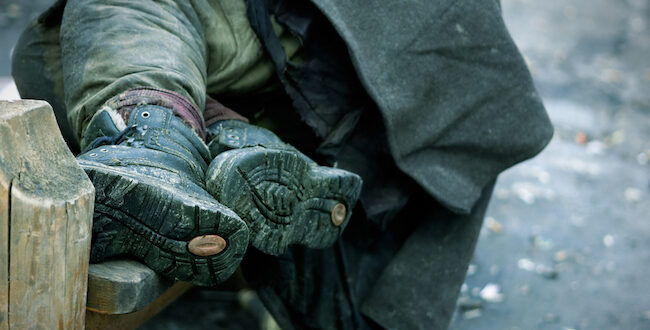 As I have been sheltering in place in the quietude of my apartment in North Idaho, I found myself wondering how people have been doing in the place where there is no shelter. By that, I mean the homeless place. So I decided to interview a few people whom I knew to have been experiencing homelessness.

The first person whom I contacted was David “Ninja Kitty” Teague. Ninja Kitty is a 27-year old man currently living on the streets of Berkley, California. He answered four of my questions, and gave me his permission to quote him verbatim.

Andy: How would you say Berkeley street people are reacting to COVID-19 concerns in general?

Ninja Kitty: That would depend on which group of homeless people you talk to. Elderly people are taking it very seriously. They are sheltering in place, leaving their encampments to bare minimum if they need to. It seems that a lot of the younger groups have probably disappeared to the woods.

There are, of course, those who are stuck in the shelters. The response in the shelters is not adequate at all. They’re still keeping the same amount of people that they have, they’re not spacing them apart, they’re not letting them stay longer, and they’re leaving some of the most vulnerable people (elderly etc.) to the streets.

Andy: I have learned that cops are being cautioned not to conduct sweeps of encampments because this will spread the virus further. How is this being addressed?  Is there general police cooperation?

Ninja Kitty: There is general cooperation in Berkeley, at least. San Francisco and other places, they are still dispersing them.

Andy: Sheltering in place is an oxymoron when a person has no shelter in which to place themselves. To what extent do you think COVID-19 is being exploited to discriminate against the homeless?

Ninja Kitty: They are definitely discriminating in the sense of making it impossible for people who panhandle to gather the resources they need to survive sheltering in place. They’re also not putting enough sanitation or porta-potties out as per CDC guidelines.

Andy: What about those who live in cars?

Ninja Kitty: Oh! Glad you asked. There is a lot of strange parking enforcement and people getting their cars taken from them. This makes them even more vulnerable to the virus.

I was perplexed by this answer. I couldn’t quite understand why, if people depend upon living in their cars, they would be taking their cars away at a time when we all need to shelter in place. My guess is that more people who had been sleeping outdoors either found a car to sleep in, or else returned to a car that they had vacated in favor of outdoor living.

People do choose to sleep outdoors if it seems better than an indoor situation.  Sleeping in a car – especially a small car – is not a very comfortable way to sleep. All other things being equal, I personally would rather sleep outdoors than cram myself into a Honda Civic.

So, with the increase of people sleeping in vehicles, it’s likely that more illegal parking has taken place, which would largely account for the problem.

Ninja Kitty’s answer to my previous question was not unsurprising.  I can’t imagine people in any crowded city sitting 6 feet apart from each other on a sidewalk. There would not be enough space on the streets. So naturally, they huddle closer together, and are now told by authorities to move farther apart. Probably about 80 percent of them are forced into a zone where they cannot panhandle at all.

But we need to understand that people flying signs on sidewalks are trying to make a living. They depend on that livelihood to meet their daily needs.   Their frustration cannot possibly be much different than that of the 10 percent of Americans in the recognized work force who have lost their jobs in the past two weeks.

Now about the sweeps. I am morally and philosophically opposed to the idea of uprooting anyone from their dwelling place; that is, unless they are sleeping on someone else’s private property, or have a warrant out for their arrest. It always saddens me to see multiple people thrust out of their abodes when encampment sweeps are conducted. While homeless encampments may be an eyesore, people do need a place to sleep. No crime has ever been committed by a person who is sleeping.

However, sweeps are conducted for many different reasons. There may be a general atmosphere of littering, public drug abuse, or flagrant disturbance of the peace. But these are legal constraints that apply to all people – not just to homeless people.

In any case, the landmark decision of Martin v. Boise has ruled that it is a violation of the 8th Amendment to wake someone sleeping on public property, if in fact that person has nowhere else to sleep. Add that to COVID-19, and we have a double moral error. The virus will spread further and faster as long as encampment sweeps are still taking place. We need to honor the homeless person’s right to shelter in place.

Before I got off the phone with Ninja Kitty, I asked if he had run into Kathy Kitzman lately. Ms. Kitzman is the admin of the “Homeless Lives Matter” Facebook group. She had not returned my messages in a timely fashion.  This is unusual for her, and I was concerned.

David “Ninja Kitty” Teague then advised me that since the Berkeley Library was closed, Kathy could no longer admin the group on a regular basis.  So that provided yet another answer.  Many homeless people depend upon public libraries being open for many reasons, not the least of which is regular computer access.

I then spoke with Dino.

A Conversation with A Moscow Homeless Man

Dino is a 54-year-old homeless man who is known in the Moscow community.  He has told me that since COVID-19, his relatively tranquil homeless life has become almost unmanageable.

“I can’t crash at any of my usual spots anymore!” he exclaimed. “I used to hang out at the hospital, and now it’s closed off except for staff. If I sleep in my car, for some reason I’m being interrogated. I was in the spot out by Domino’s Pizza, and some guy came out and ordered me to leave. I wasn’t doing anything, I was just reading on my iPad. I don’t what to make of it, but they’re treating me like a dog.”

“Let’s put it this way,” said Dino.  “And I hope they print this in whatever paper you’re writing for. If they keep treating me like a dog, I’m gonna start pissing on fire hydrants.  Isn’t that what dogs do?”

I truly get it.  When somebody treats you like something – anything – after a while you begin to act that way.  You may wish to do so out of rebellion, as in Dino’s case.  Or you may do so because by and by, you actually begin to believe you are worthy of that kind of treatment.

Homelessness is a dehumanizing experience.  People often don’t treat homeless people as people. They treat them as homeless people. Many people remain homeless year after year, because their self-esteem is so eroded by this experience, they cease to believe that they will ever warrant the dignity it takes to live indoors like others. If one is repeatedly treated as though they are not a full-fledged human being, then what do you think will happen?

Eventually they themselves will not think of themselves as fully human.

In the current COVID-19 situation, we are being afforded a first-time opportunity as a planet to fight against a non-human enemy. It could be a great victory if we all come together. The Human Race vs. COVID-19. Now, if we can include our homeless brothers and sisters as equal parts of that human race, I think it will be a good step toward achieving our common cause.

[…] friends from Berkeley, California who have also experienced homelessness, one of whom I have interviewed on this site. Though no one there has gotten back to me yet, I seriously doubt that this fix was effected by […]