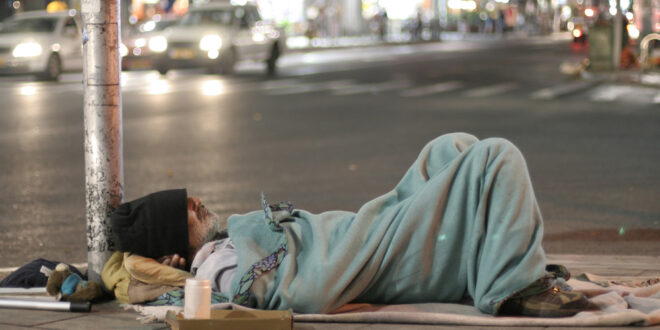 Man sleeping in a street / Photo by paulprescott (Depositphotos)

Homeless at the Piano

Homeless at the Piano

When I was homeless, I would wake up on a couple pieces of cardboard, sometimes set over dirt. Sometimes I slept on a ramp on the side of a Catholic church. I would wake when the sky was getting light, then wander into a nearby Alcoholics Anonymous fellowship. There I would hit the bathroom for a quick clean-up before grabbing a cup of coffee.

Make that three cups. The coffeemaker there was a homeless lady with 30+ years of sobriety in A.A. I remember her commenting how I would sit at the meeting and appear to be calmer and calmer, the more coffee I drank.

There was a none-too-pretty picture of the self-serving homeless person, who would come into the Berkeley Fellowship, grab a cup of coffee intended for an A.A. member and then leave the premises. I did not want to conform to that picture.

So I sat for an hour, listened and occasionally spoke. I heard many wise sayings in that room, from people who had effectively found recovery from alcoholism and drug abuse. Inwardly, however, I knew I was mostly in it for the coffee.

There were also a few other ways for me to find a morning cup of coffee. Sometimes I would sleep in an illegal spot on campus near to a Starbucks. I’d have saved a buck and change from the previous night, and then I would get to sit in the Starbucks with a newspaper — almost looking like a “normal” person.

The men’s shelter had excellent Peet’s coffee along with oatmeal, eggs, bread, peanut butter and all kinds of morning goodies. This was also an option. But my favorite coffee was the Kirkland Columbian they served at the North Berkeley Senior Center.

And it was only forty cents.

Some mornings, I would get myself to the Senior Center as soon as it opened at eight. On other mornings, I was already coffee’d up from other sources. In that case, I would head straight to one of their pianos.

There were three pianos at the Senior Center. A nice Yamaha console upstairs, a Hamilton clunker in a corner room and another decent Yamaha in the main auditorium. There, coffee was available, and lunch would be served for three bucks — or free if you were strapped.

But I didn’t want to play in the auditorium. There were too many people there, and I did not want to disturb them. Often, when I tried to play a piano somewhere — at a church for example — I was told to stop using their piano due to “insurance issues.” I guess the days of playing in U.C. dorms and practice rooms were gone, and I was generally pretty piano-starved throughout my homeless sojourn.

As for the piano upstairs, there was too much interference in the environment. Yoga classes going on, people on exercise bikes, cramped quarters. So I gravitated toward the piano in the corner of the building, which happened to be situated right next to the pool room.

Though it wasn’t the best piano, I certainly got the best reaction I could have hoped for at the time. Usually there were about ten homeless guys shooting pool in the room next door. I could hear them cheering, sometimes after every tune. Sometimes they all appeared outside the door — smiling and clapping, and asking for more. Once one of the guys came into the room and started snapping his fingers beside me, groovin’ on the sounds. (I remember it was during the song “Skylark” by Hoagy Carmichael.)

So I was getting the best of both worlds — a bit of practice and a bit of positive attention. A far cry from the mostly negative attention I was receiving from elsewhere.

But one day, as I approached the room with the piano, I saw a sign on the pool hall:

Disturbed, I approached the lady at the front desk to complain.

“Why’d you close down the pool hall?” I asked Laurie. “Those guys were my only audience!”

“Nothing personal,” she began, “but your friends were getting drunk at eight in the morning, and kinda wreaking damage to the building. We had to kick them out to fix up the place. They can’t be drinking like that on our property.”

“Well,” I retorted, “I didn’t even notice they were drunk! I just thought they were an unusually appreciative audience.”

At that, Laurie didn’t miss a beat.

“Well play out here then!” she suggested, pointing to the main auditorium.

“We WANT to hear you!!” she shouted, as though trying to jolt me out of a delusion.

“Oh,” I said, sorta shuffling in my shoes. “Well, in that case, I guess you can be my audience.”

The sense of identity crisis that went through my head at that moment was quite profound. Why on earth would I only want to play the piano for other homeless people?

I think it was this. I had gotten so used to only being accepted by people who were outside, and being looked down upon by people who lived inside, I couldn’t imagine them doing anything other than to look down on me, even as I played the piano.

After all, my piano playing is not appreciated by all people at all times. Many people like it, but others don’t. Inside me, however, it was seen as something that gave me a sense of value. It separated me from the picture of the burned out homeless person, having lost all incentive, having lost all hope.

I did not want to hear the cries of derision and mockery from people who lived indoors — I heard them too often on the streets, and I had not permitted them to touch my musicianship.

For now, I started playing every morning in the main auditorium, and was actually very surprised at the reception. Even a fellow from the Catholic Church on whose ramp I slept stopped by, quizzically enjoying the music. I occasionally received tips from homeless people who hung out all day in the computer room.

It wasn’t long before I was doing a full-on concert at the North Berkeley Senior Center. People filmed me on their smartphones, using those big tripods. I still have footage from the concert, to this day.

I remember it was a momentous occasion. I even delayed an opportunity to rent a room on the Russian River from a Facebook friend-of-a-friend. I remember Jonathan, one of the men who helped run the senior center, trying to persuade me to take the room instead. He thought I should have jumped at the chance to grab a rental far away from the scene of my chronic homelessness, on the beautiful Russian River.

Needless to say, I lost the opportunity to get the room due to my unusual set of priorities. I did however show up for the show — in as fine a form as ever. How I enjoyed the discussion, the smiles — all the applause from people in my age group, people who appreciated music just like me, and who just happened to live indoors.

After the last song, which I believe was “Bridge over Troubled Water,” I was so happy I crossed over to the other side of the auditorium to grab another cup of coffee.

There, I was denied my coffee — for I did not have forty cents.

Previous Sacred Texts: Scripture as a Communal Event
Next When democracy is a one-way freeway