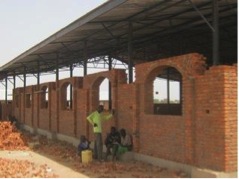 “The fundamental delusion of humanity is to suppose that I am here and you are out there.” -Yasutani Roshi

The Rev. Abraham Yel Nhial spends much of his time in exile. Forced out of Sudan in 1989 due to civil war, Nhial spent the next 14 years living in refugee camps in Ethiopia and Kenya until he was selected — along with 4,000 other “Lost Boys” — to immigrate to the U.S. in 2001.

He eventually made his way to a seminary in Pittsburgh where his roommate turned out to be none other than William Deng: fellow “Lost Boy”, soon-to-be Episcopal priest, and adopted son of the Rev. Peter Kalunian of Holy Trinity, Sunnyside. After graduation, Nhial was elected bishop very quickly but kept in touch with his American family. A recent email sent by Nhial to Kalunian asked for donations to build a cathedral. Currently, Nhial confirms 300-500 people at a time in a country that has established itself as a vast emergent church with 4.5 million Episcopalians. As of 2011, the United States recorded 1,923,046 confirmed Episcopalians. South Sudan — a country relatively the size of Texas — clearly requires a building sufficient enough to handle and represent the amount of need Nhial is experiencing.

After learning of this need, a parishioner of Holy Trinity challenged the congregation to a $500 match program. The church members matched that parishioner’s $500 by buying bricks at $25 each. The Diocesan MDG two-for-one match program contributed an additional $500, bringing the total $1500 was then wired to the Episcopal Diocese of Aweil, South Sudan.

Despite the funds, there is a still a lot of rebuilding to do. Much of South Sudan’s newfound wealth has yet to filter down to its people. After 20 years of civil war much of the population remains impoverished, with half living below the poverty line in a subsistence economy. Sudan is a land of survivors, and Nhial and many “Lost Boys” are clearly making their way home with education, wisdom, and resources to share. However, they cannot rebuild and rejoin their land without support. A point Nhial makes time and again during his extensive travels to raise awareness and funds for his people.

If you feel called to provide additional funds toward the completion of the Cathedral in Aweil, contact the Rev. Dr. Peter Kalunian, Priest in Charge at Holy Trinity Episcopal Church at holytrini@embarqmail.com or 509-837-4727.