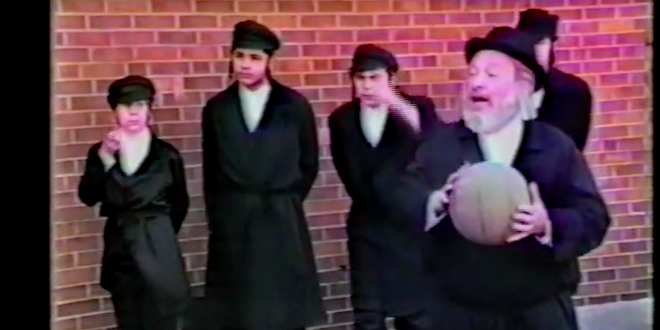 The whole thing started when a fellow FāVS writer posted to Facebook a video called “The Renewed Mind is the Key.” It depicts two women and a man in matching blue outfits — matching, but complementarian, so a suit for him and dresses for them — engaging in a highly coordinated dance routine and singing a praise song. “The renewed mind is the key to the Christ in me,” they sing, as a guy behind a drum kit keeps things suitably funky. The set includes a red-orange sky and a replica of a Bavarian-style cottage. Two men stand at podiums, one labeled “The Present,” the other “Truth.” No explanation is given for any of this, really. At one point, the male singer moonwalks.

The thing about YouTube is that once you strike gold, the site guides you pretty assertively to the motherlode. Thus it was that my wife and I discovered a video purportedly produced by the 2nd Church of Christ in West Dubuque, Iowa. “Rappin’ for Jesus” is many things, but politically correct is not one of them. Perhaps most notorious for using hip-hop’s version of the N-word, this video has gone aggressively viral. As of this writing, it’s racked up 18.3 million views.

After watching it in its unbelievable entirety, I had the same response as when “Hogwarts School of Prayer and Miracles” took the Internet by storm: This can’t possibly be real. Indeed, Daily Dot writer Chase Hoffberger contends that “Rappin’ for Jesus” is almost certainly fake. The wonderfully named blog GodSpam (tagline: “Religion & Absurdity in Pop Culture & the Media”) makes an even more convincing case that “Rappin’ for Jesus” is not an actual instance of terribly misguided ministry but rather a very well-crafted hoax.

However, before I learned that the video’s authenticity is very much in doubt, I wanted more. Specifically, I wanted to find the most outrageous rapping-rabbi video the Internet had to offer. Fortunately, like the cornucopia of legend, the Internet just never stops giving. All we had to do was Google “rappin’ rabbi,” and the die was cast. “Rabbi Sid – The Rappin’ Rabbi” is an experience to which no words of mine can truly do justice.

“Rabbi Sid” gives us a lot to talk about. First of all, take a look at the comments below the video. “This use [sic] to play on the radio every day in Montreal when I was a kid, thanks for posting,” says one viewer. That’s a little hard to believe, but hey, Montreal has a large Jewish population (an estimated 89,650 in 2006!), and Canada is capable of doing things, culturally speaking, that the U.S. just wouldn’t do. It’s like a superpower.

Another viewer, whose handle is ChilledCanuck, comments: “This is totally awesome! I was 10 years old when my Grandfather made this video. I must have watched this video 100’s of times before seeing it here on youtube. Thank you for doing this. This means a lot to our family.” A little Internet sleuthing revealed that ChilledCanuck is most likely Michael Aronovitch, a voice actor who lives in — you guessed it — Montreal. (Confidential to Michael Aronovitch: If you Google yourself and find this article, please contact me. I’d love to interview you for a follow-up piece: “Behind the music: The story of ‘Rabbi Sid – The Rappin’ Rabbi.’”)

Finally, the user who posted the video to YouTube weighs in:

This was a video that he took part that we made back in 1984. I don’t remember how he came to be cast, but I remember that he was still working for the cemetery. Jerry was a lot of fun to work with. None of us ever thought at the time that “Rabbi Sid” would find immortality on something like YouTube.

“He was still working for the cemetery”? These are the kinds of details that suggest this is not a case for Snopes.

Several things about the video itself are noteworthy. Unlike the probably fake “Rappin’ for Jesus,” this attempt at Chasidic-flavored hip-hop involves actual black people, presumably — hopefully — in deference to hip-hop’s origins and its status as a major force in black culture. Unfortunately, the video’s black characters are depicted in very stereotypical ways. I’ll get back to that in a bit.

Another thing: For the most part, modern Judaism is a non-proselytizing religion. Yet Rabbi Sid seems intent on spoiling the stereotypical black young people’s fun by rudely turning off their boombox and teaching them, in rhyme, about Judaism, with a passel of seemingly Orthodox young men in tow — Rabbi Sid’s posse, I suppose. Sample lyric: “Listen, boy, don’t be a fool / Every Shabbos, go to shul!” That’s pretty proselytize-y, particularly when the people you’re rapping at have demonstrated zero interest in your faith.

While some traditional Jewish movements have an active interest in winning wayward Jews (like me, I guess) back to the fold of traditionalism, I suspect non-Jews are usually considered a lost cause. Traditionalists are delighted to share the joys of Judaism with them, but they’re not leaning on them, Rabbi Sid-style, in hopes that they’ll start attending services every weekend.

A few moments later, Rabbi Sid advises two women he finds by a public phone (helloooooo, 1984!): “Listen, ladies, get off the phone / and try to keep a kosher home.” Also they shouldn’t have premarital sex: “You want his ring, hear what I’ve said / Before you wed stay off his bed.” P.S. Rabbi Sid plays some mean basketball. By the time the earlocked posse is popping and locking, I think we all get the idea.

As a child of the ’80s, I desperately want “Rabbi Sid – The Rappin’ Rabbi” to be for real. In part it’s because I’m a pop culture addict who has a special place in his heart for hopelessly dated absurdities. But it’s also because Jewish values and culture are now part of my professional life, and I love/cringe at the idea of a Chasidic rabbi, during the cheesiest decade in human history, pursuing community outreach by engaging in such bald-faced appropriation of black culture.

Relations between Jewish and black communities over the years have been a very mixed bag. However, there has been great allyship at times, particularly during the Civil Rights Movement, when many Jews took up the banner of racial equality alongside black community leaders. When I look closely at Rabbi Sid’s awkward, problematic inner-city proselytizing, I’m reminded of how challenging interfaith and intercultural outreach can be. By 1984, plenty of American (and Canadian!) Jews were no doubt engaged in much more meaningful and less tokenizing work than Rabbi Sid’s. Sure, the rabbi and his dancing boychiks got it wrong, but every day, in our own communities, we have many, many chances to get it right.

Previous Ramadan begins, overshadowed by conflict for many in the Middle East
Next California’s End of Life Option law: More peaceful deaths or moral quicksand?