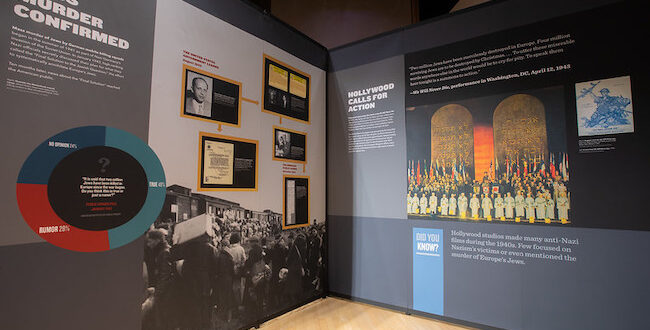 The Americans and the Holocaust, American Library Association (ALA) traveling exhibition on display in the Meyerhoff Theater and Well/Contributed Photo

UPDATE: Due to COVID-19 concerns, the opening of this exhibit is postponed until April 1.

Gonzaga University’s Foley Library will be hosting the “Americans and the Holocaust: A Traveling Exhibition for Libraries” from March 19 to April 27. The exhibit examines the motives, pressures and fears that shaped Americans’ responses to Nazism, war and genocide in Europe during the 1930s and 40s.

Chosen from over 250 applicants, the university’s library is one of 50 U.S. libraries selected from a competitive process to host the traveling exhibit from the U.S. Holocaust Memorial Museum.

Brad Matthies, associate dean of library services and coordinator of the exhibit, was excited when he was notified in October that the university was selected and one of the things that pleasantly surprised him was how both the Gonzaga and Spokane communities coalesced around the exhibit, including 16 letters of support.

“People, in a sort of broader context, have issues, concerns or worries about the polarized climate and hate and hate groups,” Matthies said, “attending this exhibit is, I think, a way to show support and combat that.”

He added that there will be two supporting exhibits focusing on hate in the Pacific Northwest, particularly white supremacy, and described it as an opportunity to reflect on and think about what people can do after visiting the exhibit.

According to the university’s website, the exhibit will explore the factors that influenced decisions by the U.S. government, news media, organizations and individuals as they responded to nazism including the Great Depression, xenophobia, isolationism, racism and antisemitism.

“This exhibition will challenge the commonly held assumptions that Americans knew little and did nothing about the Nazi persecution and murder of Jews as the Holocaust unfolded,” the website described.

A Special Place in Spokane

Rabbi Elizabeth Goldstein, a associate religious studies professor and Jewish chaplain at Gonzaga University who wrote a letter of support for the exhibit, said the exhibit has a special place coming to the university because the institution has a small population of Jewish students, and Spokane also has a small Jewish community, and it’s more often in this part of the country that people can grow up and not have any Jewish friends or have a chance to learn about Jewish history.

She added that she wants people to be aware of the ways in which the U.S. has committed some wrongs in not welcoming Jewish people during a time when it could have helped them, and hopes the exhibit will contribute to the conversation on immigration.

“In addition to learning about Jewish history, which I think is really important in how our country has treated Jews, I think it’s also very relevant to contemporary issues of how we think about immigration in our country today and how we think about what it means to welcome immigrants, how it’s important to have our doors open to people who are really in fear of their lives, and in terms of being proud of strength and not closing the doors because we’re afraid of losing our strength,” she said.

The exhibit will be on display in the Rare Reading Room on the third floor of the library, along with a series of special events that will take place throughout March and April.  The events will be presented by the Gonzaga Institute for Hate Studies and supported by the Jewish Bulldogs and the Spokane County Human Rights Task Force.

Goldstein said that the Jewish Bulldogs will be having its annual Holocaust Memorial service in the same room as the exhibit as well.

See It to Understand It

Hershel Zellman, a retired family physician and a member of the Spokane County Human Rights Task Force who wrote a letter of support for the exhibit, said people should see it to understand how and why the Holocaust progressed the way it did so they can look inward and see that there are dramatic parallels that are occurring right now between the past and the present.

One message of the exhibit that stood out to him the most was one that came from polling of American people at various stages of the Nazis coming to power, entering World War II, the conclusion of the war and the discovery of extent of the genocide and how people were treated in the camps.

“And throughout the time these polls were being done, it was clear that the majority of the American public, even if it was a little bit over 50 percent, were antisemetic, xenophobic, anti-immigrant,” Zellman said, “and that didn’t change from when they were first denying that anything was actually occurring in Germany to the Jews, to the time they found out how bad the genocide actually was.”

The exhibit is free and open to the public, with hours being Monday through Friday from 10 a.m. to 4 p.m., and Sunday from 1 p.m. to 4 p.m. 30-minute guided groups tours are available by request.  Matthies said that the exhibit is suitable for all ages and does not display graphic content.

March 17: “Opening Event – Hate: Reflections and Action” from 7 to 8:30 p.m. at the Hemmingson Center Auditorium 004 with panelists George Critchlow, Gonzaga law school professor and an original founder of the Gonzaga Institute for Hate Studies; Michael DeLand, Gonzaga assistant professor of sociology and criminology; and Shannon Dunn, Gonzaga associate professor of religious studies. Reception will be at 6:30 p.m.

April 22: “Closing Event – Hate: Documenting it, Understanding it, and Countering it,” at 7 p.m. in the Cataldo Globe Room with panelists Ken Stern, a New York attorney and member of the Institute for Hate Studies advisory board; Barbara Perry, professor of social science and humanities and director of Centre on Hate, Bias and Extremism at University of Ontario Institute of Technology at Oshawa; Brian Levin, professor of criminal justice and director of the Center for the Study of Hate and Extremism at California State University, San Bernardino; and Kristine Hoover, director of Gonzaga Institute for Hate Studies.

For more information on the exhibit and events, visit https://www.gonzaga.edu/foley-library/about/news-events/americans-and-the-holocaust.

Previous Ask A Jew: What is Humanistic Judaism?
Next UPDATED: Spokane Churches Suspend Services in Response to COVID-19