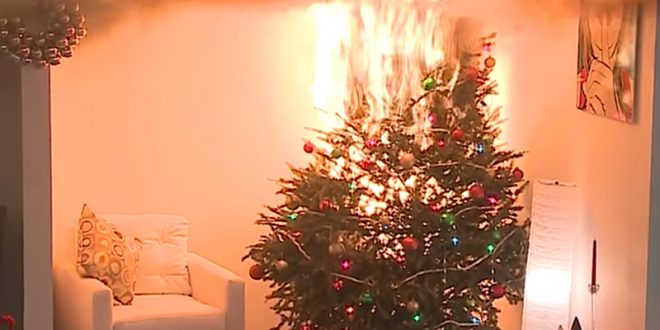 Holidays on fire: When Christmas trees and candles lead to 911 calls

(RNS) In his 28 years as a New York City firefighter, Fred Fausak has been called to douse holiday flames more times than he cares to remember.

Christmas trees catch on fire. Holiday lights ignite the drapes. Hanukkah candles burn the carpet. At this otherwise joyous time of year, illumination can cause disaster.

“You go into a house, or an apartment, and it’s all decorated for Christmas, and now all the toys for the children are ruined — they’re floating in water,” Fausak said. “It’s devastating for the family, but it’s also hard for the firemen to see this. It breaks your heart.”

So firefighters the world over issue warnings in this season of Advent, Christmas, St. Lucia’s Day, Hanukkah and Kwanzaa — all holidays that incorporate flames in their observances.

Fausak — not only a retired firefighter, but an Episcopal Church deacon — gets it. He knows that it’s not Christmas without candles and trees.

Or as John White, president and chaplain of the Los Angeles-based Firefighters for Christ International, put it: “The lights to me are just a reminder of who Jesus was. … As we see the lights we just need to remember Jesus was life, and that life was the light of all mankind.”

But it doesn’t take White’s 45 years as a firefighter to know that religious devotion does not excuse anyone from taking precautions to assure that Christmas lights and greenery don’t combust.

Jesus “wants us to see light,” White added. “He doesn’t want us to lose our life.”

Six Americans die on average in fires that started with Christmas trees each year, according to the to the nonprofit National Fire Protection Association, an industry group. That makes tree fires – in which 1 in 34 results in a fatality — far more deadly than fires in general, in which 1 in 142 leads to a death.

In one particularly tragic case last Christmas, two grandparents and four of their grandchildren died after a corroded electrical outlet ignited a 15-foot Fraser fir and burned down a home in Annapolis, Md.

Then there are the hundreds of holiday fires that have nothing to do with Christmas trees. Overloaded outlets and faulty wiring are often to blame. And candles, set in wreaths to observe Advent — the period of reflection and penance in the four weeks leading up to Christmas — can easily set fires even when people keep an eye on the flames.

That’s what happened two weeks before Christmas last year at St. John Vianney Catholic Church outside Milwaukee, when a parishioner lighting candles on an Advent wreath inadvertently set a fire when a lit wick fell on a piece of burlap. Though congregants extinguished the fire quickly, the mess from the blaze and fire suppressants reached every corner of the church and required days of cleanup and fumigation.

Hanukkah — the Jewish Festival of Lights, which begins on Christmas Eve this year — is all about religious freedom and candle lighting.

On each of its eight nights, Jews light an additional candle on a menorah, a type of candelabra  — and often a family lights more than one. On the last night of Hanukkah, when all the candles are lit, that’s a lot of open flame.

Rabbi Howard Cohen, a volunteer firefighter in Bennington, Vt., said even he — who often goes into schools to teach children about fire safety — had a menorah fire in his own home a few years ago.

“We were all sitting in the kitchen and the kids said they smelled smoke,” Cohen said. “Sure enough, I could see the haze beginning. Our menorah had fallen over and it caught the card table on fire. If it had been near drapes, we would definitely had a fire in the house.”

“Lesson learned: You’ve got to have a noncombustible material under the menorah, like aluminum foil or a metal tray,” Cohen said.

Whether it’s the celebration of Hanukkah, Christmas or some other holiday, here are tips from the NFPA to keep the festivities from going up in smoke.

Previous Stillness and Snow Days
Next Ask An Eastern Orthodox Christian: Do you pray to the Virgin Mary?