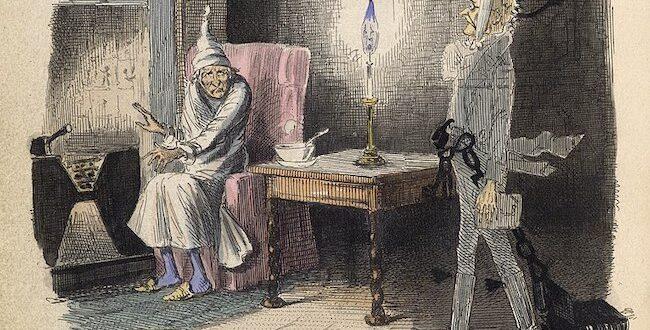 It is that time of year.

In truth, it is merely approaching that time of year – except in my house where Christmas decorating has been underway since Nov. 1. The “holiday season” seems to arrive earlier every year.

Some of you may recall that I surrendered to Christmas in a column posted to FāVS exactly one year ago. My surrender was unconditional, though the “bah, humbug” that is so much a part of my personality still emerges without much provocation.

I had another “bah, humbug” moment last week when my dear wife, Carla, and I attended a new touring production of “A Christmas Carol” that starred Bradley Whitford, one of my favorite TV actors.

Raised Jewish and now a confirmed atheist, I still enjoy classic holiday plays and movies, so long as they feature a touch of real-world cynicism and are not overly religious.

Charles Dickens’ classic story has long been a favorite. I read the book in a college lit class. It is dark and scary and is a searing indictment of social injustice in Edwardian England.

The story was committed to film early in the silent era and there are, reportedly, 135 movie versions. I have seen many. My favorite is the British film, titled “Scrooge” in this country, featuring the great Alistair Sim. But I enjoy the more modern George C. Scott version and the great cartoon musical featuring Mr. Magoo. The “Muppet Christmas Carol” holds up, with Michael Caine making a fine Scrooge. Disney can even pull emotion out of the tale in the Mickey Mouse iteration.

A good “Christmas Carol” presents a lead character so villainous we cannot imagine his redemption absent supernatural intervention. All the films cited above do that even when lead parts are played by cartoon characters and puppets.

Compared to faithful retellings, the touring production at the First Interstate Theater was not very good. This was a revisionist presentation. The sets were modern, minimalist, meaning they evoked nothing of dreary old Edwardian England save some terrific, atmospheric lighting. In my view, that setting is as vital a character as Scrooge.

And except for the last few minutes of the second act, there was precious little Christmas, a “Christmas Carol” without much holiday and few carols. Deprived of its holiday foundation, the production came across as somber, mean, and shrill. Groundwork was never laid for Scrooge’s final, redemptive recommitment to the holiday, and to a life meant to be well lived.

Carla, who knows better than anyone my ambivalence to all things religious, was surprised to hear me complain about the holiday’s absence in this latest production. But on reflection, leaving Christmas out of “A Christmas Carol” worked for me on another level entirely. Strangely, its message seemed more contemporary, accessible, and especially relevant.

Absent Christmas, the play is, at its core, about an evil-tempered, miserly old man whose life is redeemed in a single night when he is visited by three ghosts. Absent the holiday backdrop, the ghosts simply represent his past, present, and future. It doesn’t take a Christmas story to think about how all our lives might be changed by three such visitors.

How many of us have come to grips, in the most meaningful and impactful way, with our past? In our memories, we see the past through our lens only, as our lives, our successes, failures, and ambitions were shaped. The genius of Dickens’ ghost of Christmas past is the step-back that allows Scrooge to see how his choices affected the lives of others, sometimes in positive ways, more often in ways thoughtless and cruel.

The ghost of Christmas present most effectively delivers Dickens’ message on social injustice. Some in his Edwardian world lived lives of privilege. But that society condemned much of the population, especially children, to lives of squalor, hunger, and endless labor. As a man of privilege, who has forgotten his own impoverished past, Scrooge sees for the first time how his life is built on the suffering of so many others. That message surely resonates in the contemporary world.

And Dickens wrote his ghost of Christmas future as the embodiment of death, the ghost that stalks us all. But in his story, that ghost also lays the groundwork for Scrooge’s ultimate redemption. While death comes to all, Scrooge realizes, we can choose to live well, to be friends to all people, to fight injustice, and support equality. The life well-lived, he learns, can lead to a death well earned – to a form of eternal peace.

Those are powerful messages, and Dickens’ story has survived for 182 years because, as flawed as we may be, all of us instinctively know we can be redeemed by the actions we choose to take in the here and now. It is on us to live life well, to think about our fellows, and do for them as we would have them do for us.

That message does not have to be connected to a religious holiday to have an impact. For me, taking Christmas out of the story was a revelation. I disliked the production, but I appreciated where it led.

The better movie versions will play in an endless loop this coming season. I will watch, as always, feeling the emotional catharsis that comes when Scrooge wakes up a new man on Christmas morning. It is possible I might even come away with a bit of the holiday spirit.

Of course, in the moment last week, I was simply disappointed. There was no emotional catharsis. But – not exactly a “bah, humbug” either.

Walking out of the theater and into a wet, windy, and cold November night I may have lacked some of the Christmas spirit. But I came away ready for the holidays. Bring on Thanksgiving.

Previous Do you care about religion reporting in Spokane? Consider a donation
Next Covid Confusion