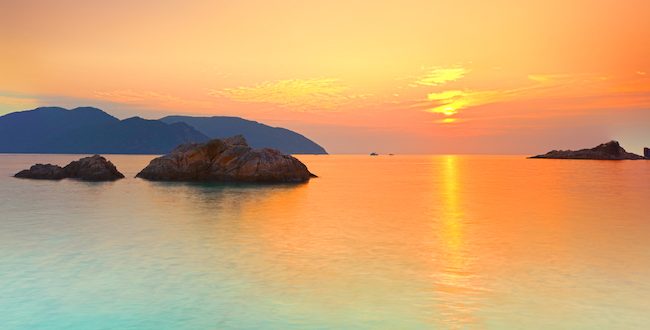 Sunrise over the Caribbean Sea/DepositPhoto

Read Part 1 and Part 2 in this series.

I came so close to understanding faith. Then a wave of doubt came crashing in, tossing me to-and-from on the sea. Fear took hold and outgrew my mustard seed of faith.

Debates thrive to this day on the question of what it took for Doubting Thomas to eventually believe that Jesus was alive again. A colleague, Benjamin Schliesser, has written two tomes, one on faith, the other on doubt. Doubting Thomas refused to believe unless he saw Jesus with his own eyes, unless he touched the wounds in Jesus’ hands and side. When Jesus appeared to Thomas, the text is open for interpretation whether Thomas actually ever touched Jesus’ hands and side.

Or was seeing Jesus enough?

Belief and doubt collide with good and bad things that happen. Did three Jewish leaders at Auschwitz really put God on trial and find God guilty for allowing the Holocaust?

Miracles are less obvious than disasters.

What constitutes a miracle, and do I need one to believe? I ponder being alive and loved, not being cured, as the purest expressions of the miraculous.

Needing a miracle to believe is to put trust in the miracle itself. But if faith is in the miracle, then it is not really faith at all. Miracles by nature are unsustainable.

Faith is a gift.

Faith as a pure gift depends not on how I feel or what I must do to bring it about or sustain it. Faith needs only to be received. For it is given in a package so tiny that it can easily be missed.

Faith the size of a mustard seed can move a mountain, Jesus once said.

I am left to ponder being moved from here-to-there, being tossed to-and-fro in disaster, and how tethered healing is to belief and doubt.

What will it take to move the mountains in this life, especially if healing never happens?

How do I know whether I have faith, and enough of it?

What difference, if any, does faith make? Does it mean I believe?

The measure is freedom. Freedom comes by way of owning and loosening my bondage to fear that arises from being alive and facing mortality.

Perhaps a tiny seed of honesty that I doubt is a good starting place. In doubt I cry out: Lord, help my unbelief.

The evidence of faith cultivated in my essence as a created being is freedom—the fruit of life and of love freely harvested from the vine of belief.

To taste and see.