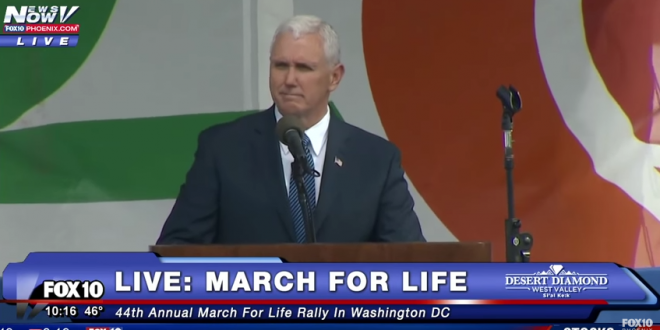 On Friday, Mike Pence made history when he became the first vice president and the most senior administration official to address the March for Life, an annual event held in Washington, D.C. to mark the Supreme Court case of Roe v. Wade, the controversial decision that made abortion legal in all 50 states.

Here’s the full text of his speech:

Thank you Karen and Charlotte, and thank all of you on behalf of Pres. Donald Trump, my wife Karen, and my daughter Charlotte.

I’d like to welcome you all to Washington DC for the 44th annual March for life. It’s a good day. It’s the best day I’ve ever seen for the March for life, in more ways than one.

More than 240 years ago, our founders wrote words that have echoed through the ages.

They declared these truths to be self-evident that we are, all of us, endowed by our Creator with certain unalienable rights, and that among these are life, liberty, and the pursuit of happiness.

44 years ago, our Supreme Court turned away from the first of these timeless ideals.

But today, three generations hence, because of all of you, and the many thousands that stand with us in marches like this all across the nation, life is winning again in America.

That is evident in the election of pro-life majorities and the Congress of the United States of America. But it is no more evident, in any way, than in the historic election of a president who stands for a stronger America, a more prosperous America, and a president who, I proudly say, stands for the right to life – President Donald Trump.

President Trump actually asked me to be here with you today. He asked me to thank you for your support, for your stand for life, and for your compassion for the women and children of America.

One week ago today on the steps of the Capitol we saw the inauguration of the 45th President of the United States. I can tell you firsthand, our president is a man with broad shoulders and a big heart. His vision, his energy, his optimism are boundless and I know that he will make America great again.

From his first day in office he’s been keeping his promises to the American people.

I like to say that over there at 1600 Pennsylvania Ave., we are in the promise-keeping business.

That’s why this administration will work with the Congress to end taxpayer funding of abortion and of abortion providers, and we will devote those resources to healthcare services for women across America.

And that’s why next week, President Donald Trump will announce a Supreme Court nominee who will uphold the God-given liberties enshrined in our Constitution in the tradition of the late and great Justice Antonin Scalia.

You know, life is winning in America. And today is a celebration of that progress that we have made in this cause. You know I’ve long believed that a society can be judged by how we care for its most vulnerable, the aged, the infirm, the disabled, and the unborn.

We have come to an historic moment in the cause for life. And we must meet this moment with respect and compassion for every American.

Life is winning in America for many reasons.

And life is winning through the quiet counsels between mothers and daughters, grandmothers and granddaughters, between friends across kitchen tables, and over coffee at college campuses. The truth is being told. Compassion is overcoming convenience. And hope is defeating despair.

In a word, life is winning in America because of all of you.

I believe that we will continue to win the hearts and minds of the rising generation if our hearts first break for young mothers and their unborn children, and if we each of us do all we can to meet them where they are, with generosity, not judgment.

To heal our land and restore a culture of life we must continue to be a movement that embraces all, cares for all, and shows respect for the dignity and worth of every person.

Enshrined on the walls of the Jefferson Memorial are the words of our third president, who admonished us, so long ago, to remember that God gave us life and gave us liberty.

And be assured, be assured, that along with you, we will not grow wearied, we will not rest until we restore a culture of life in America for ourselves and our posterity. Thank you and God bless you.

And God bless the United States of America.

Here’s video of his comments to the crowd, courtesy of CSPAN:

Thousands showed up from across the country to participate in the 44th annual March for Life.  Unlike the event which took place just one week earlier, there was no anger or angst – just a celebration of life.  And as far as I could tell, none of the featured speakers openly expressed a desire to blow up the White House.

There were, however, a lot of smiling faces, judging from the photos many posted on Twitter.  Here’s just a few of those tweets:

There’s more that unites us than divides us, and the dignity of all lives is the foundation for that. #MarchforLife pic.twitter.com/smEvcvOKRv

And some couldn’t help but compare and contrast this event to the Women’s March that took place earlier.

A protest without profanity, vulgarity, violence, hate or arson?!? Must not be a liberal protest. #MarchForLife ?? pic.twitter.com/Iy4Cp4oopp

This is what a real Woman’s Match looks like! No vulgarity, no cursing, no hate, no threats to bomb the WH, no littering..#MarchForLife pic.twitter.com/nkdCBsaTSs

Strange. I don’t see cops in riot gear, looting, or anarchists smashing the windows of cars and businesses. #MarchForLife

One tweet cited Scripture used by many pro-life Christians:

‘Before I formed you in the womb, I knew you’ ~ God #MarchForLife pic.twitter.com/jmSbCvTFxO

“Before I formed you in the womb I knew you, before you were born I set you apart; I appointed you as a prophet to the nations.” – Jeremiah 1:5 NIV