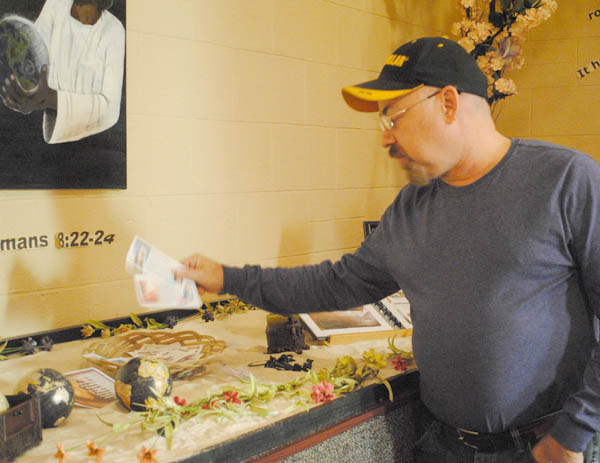 Editor’s Note: This is part of our Historic Church Project series. Read about this project here.

At first you might think Rob Bryceson is a contractor, not a pastor. He’s wearing a Caterpillar machinery hat and his phone keeps ringing about the morning’s water main break at First Covenant Church.

“Something breaks about twice a week around here,” he said.

His congregation, which has about 80 members, can’t afford to have a repairman on call. But plenty of volunteers know how to swing a hammer and are grateful to have something to give back to the 12,000 square-foot church. The congregation celebrates 125 years this month.

Bryceson said one-third of the congregation is homeless. The rest is made of young adults and older members. It’s not uncommon on Sunday mornings to see street people in the pews with their dogs, or maybe even rolling cigarettes in the back.

He came to the church five years ago from California. Then, First Covenant had about 30 members and had been considering closing its doors. Many members had left for suburb churches, Bryceson explained.

The congregation needed to re-focus, Bryceson said, which meant serving the neighborhood it’s been in since 1929. That meant reaching out to addicts, prostitutes and the homeless.

Bryceson walked the alleys in downtown Spokane and invited street people to the church for dinner and Monday Night Football.

Now, five years later, First Covenant is home to Street Wise, which is a non-profit that provides free meals to about 150 homeless people each Sunday.

Bryceson said people aren’t prayed at or preached to at the meals. Street people, he added, are jaded when it comes to homeless ministries.

“Too many times these people have been sold Jesus in exchange for a Coke or a sandwich,” he said. “We believe Jesus can stand on his own.”

Street Wise, which Bryceson’s wife Tonia runs, was down to its last $600 recently and wasn’t sure how it would be able to continue its ministry. On Monday night someone came to the door with an anonymous donation. Inside an envelope was $2,500 in $20 bills with a note saying the ministry was desperately needed.

The church sits on the corner of Division and 2nd Avenue, where 50,000 cars pass by daily. It was organized in 1888, one year before Washington was a state, as the Swedish Mission Church. The congregation rented various spaces until finding its current location in 1929. The original sanctuary was condemned and torn down and the current sanctuary was built in 1949. The children’s wing, the section built in 1929, still stands.

First Covenant is part of the Evangelical Covenant Church and meets for worship Sundays at 10:30 a.m.

More photos of Spokane’s Historic Churches are available on our Facebook page.

Previous Could Pope Francis make women cardinals? A pipe dream, and an opening
Next BRIEF: Christian lawyer, professor to give lecture on LGBTQ rights and religious freedom