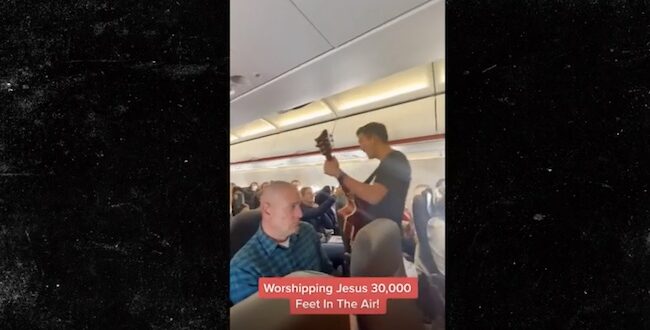 Man worships on a flight/TMZ

I first saw the video posted by TMZ a few days after Easter.

It is a brief clip. A group of airplane passengers are singing Christian songs while their purported pastor walks up and down the aisle playing his guitar as if he were a rock star.

The plane is cruising at 30,000 feet. For those not interested in airplane worship, there is no escape.

The video stirred enormous controversy, with conservative Christians arguing, often with amazing vitriol, that they have a right to worship in public. The feelings of others do not matter, of course. They dismissed critics as anti-Christian.

How quick some Christians are to claim victimhood. Meanwhile, non-Christians understand the dominant religious culture has no hesitation in exercising its privilege at our expense.

Still, I was not surprised by any of this because I have experienced it myself on a number of occasions.

Back in my road warrior days, I experienced in-flight worship – be honest and let’s call it proselytizing by force – on two occasions I can remember. In one instance, the singers and Jesus-praisers were young people on their way to camp. Fair enough. Youthful enthusiasm can be forgiven sometimes. But on one occasion, the worshippers were adults, and they were in my face and the faces of others who just wanted to fly in peace. After the singing, they approached passengers to witness for their faith.

I complained to a flight attendant. But though she said she agreed with me, she declined to take action. I am certain she anticipated the headlines had she tried.

Non-Christians understand the ironies of public worship all too well. Christians who proselytize in this way while disregarding the feelings of others, demand the freedom to celebrate in public but would absolutely deny my right to do the same.

Minnesota Rep. Ilhan Omar, one of only three Muslims in Congress, argued Muslims would never be allowed to pray openly on a plane. Hell, after 9/11, Muslims were scared to fly at all. I saw one Muslim man removed from a flight because a passenger was convinced he was a terrorist. A few “Allahu Akbars” and he would have been shot by a sky marshal.

Once on a flight from New York to Los Angeles I saw a flight attendant approach an orthodox Jewish family to tell them a passenger had complained about their appearance, apparently believing their black hats and Hasidic hair styles were some sort of threat. The flight attendant wanted to move them to the back of the plane. Imagine what would have happened if that family had broken out in public prayer.

No, freedom to hijack public places for religious purposes is a Christian right, apparently, and those of us who complain are anti-Christians who delight in persecuting this imperiled faith.

The entire incident had worked me up to some righteous anger until I read an amazing column by Mark Wingfield, executive director and publisher of Baptist News Global.

Wingfield offered his own condemnation but in far more reasonable terms.

Too many conservative Christians believe they have the right to impose their beliefs on others. Evangelicals are taught at an early age that public witness is fundamental to their faith. This is Christian privilege, he wrote.

“The root of this mindset is Christian nationalism. If you begin with the premise that America was founded as a “Christian nation” — which it was not — then it easily follows that Christians must be given special privilege,” he wrote. “This is seen not only as an expectation but as a historical fact.”

The victims of Christian privilege are those who cannot escape, Wingfield wrote. Passengers on a plane. Or the student athletes from central Washington who were intimidated into joining a prayer circle on the 50-yard line. The case of the fired football coach will be decided by the Supreme Court this term and Wingfield fears a decision from the Trump-packed court will erode forever the religious rights of minorities.

It was reassuring to see a Baptist – about as conservative as is possible for a Christian – write with understanding about the impact of Christian privilege on non-believers.

There really is nothing new here. As a child I watched my parents attempt to deal with door-to-door evangelists. Some would leave politely when told ours was a Jewish home. Others would literally put their foot in the door hoping to steal some time to persuade us we were damned to hell. It happens still.

Wingfield notes that Christian privilege is not born of meanness. I will accept that as true to a point.

But when people ignore the rights and feelings of others to satisfy their own religious compulsions, it feels mean to me.

View All Posts
Previous Don’t let a Supreme Court leak threaten what consensus we have on abortion
Next Why He Rides: Spokane’s Cycling Pastor