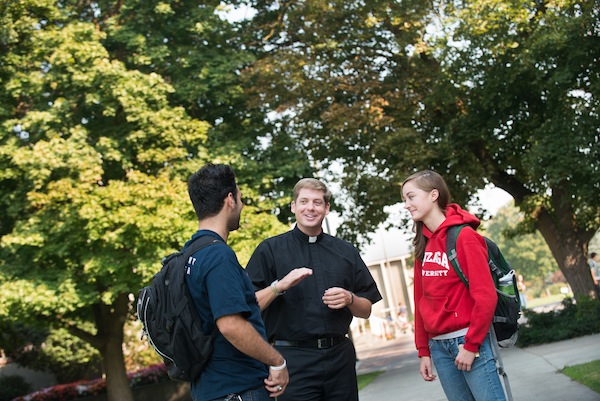 Today the Rev. C. Hightower is packing up his University Ministry office in the Crosby Student Center at Gonzaga University.

After five years of guiding students, teaching, and being the Jesuit face at the Zag basketball games, Hightower leaves next week for his new position as superior in Sacramento, Calif.

“I’m going to be a master paper pusher,” he joked.

In Sacramento, which is Spanish for “sacrament,” Hightower will lead the Jesuits working in the city’s three Jesuit intuitions — two high schools and a church.

He hasn’t been to Sacramento since the Zag women played there two years ago. Besides his new administrative duties, Hightower said he hopes to serve as a substitute teacher so he can continue working with youth.

Hightower, 43, was working as an educator in Haiti before joining the priesthood, and since his ordination 18 years ago, has found himself serving Spokane’s youth on two different assignments. First at Gonzaga Prep, his first assignment as a priest, where he served for three years, then at Gonzaga University. He also spent three years attending graduate school at GU.

“Even though I’m leaving Spokane, 11 years of my roots are here. I’ll always consider it an important part of who I am as a priest, a Jesuit and an individual,” he said. “I imagine I’ll continue to be a part of people’s lives here.”

Serving at prep and then at GU, Hightower said he’s been able to see students through high school dances, college sports games and then their weddings, he said.

Hightower will continue to serve on the Catholic Diocese of Spokane’s board of the Nazareth Guild, which raises funds for parochial schools, and has plans to return in the fall for seven weddings he’s been asked to preside over.

Michelle Wheatley, who has served as assistant director of University Ministry the past two years, has been appointed as acting director. She’ll be the first non-religious vowed woman to lead the ministry.

Hightower said his hope is that University Ministry will continue to, “enter into students lives where their faith is developed,” and continue to find ways to join in interreligious and ecumenical dialogue.

Wheatley said Hightower will be missed, but because of his mentorship, is ready to lead.

“He (Hightower) gave me a lot of opportunities to step up and get involved in the leadership and administration of the office,” she said.

But, she said, Hightower is irreplaceable.

At a recent going away party for him, so many students and staff stopped by that they could hardly fit in the building, Wheatley said.

“It was a telling moment to see how the community is going to miss him,” she said.