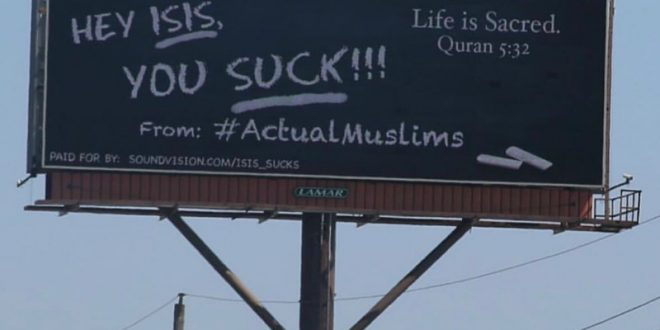 This billboard went up next to an interstate west of Chicago, part of a new ad campaign by a Muslim-run public relations firm. Photo courtesy of Sound Vision.

(RNS) As terror attacks by ISIS extremists have proliferated, many in the West have demanded that Muslims do more to denounce radicalized Islam – and with protests and sermons and theological arguments, average Muslims, imams and scholars and have done that more than is often realized.

But now a Muslim-run public relations firm in Chicago is taking the denunciations to a new level – and with a decidedly different tone – by producing a billboard and social media campaign that pulls no punches:

“Hey ISIS, you suck!!!” reads the first billboard, which went up this week on northbound I-294 just west of Chicago.

The declaration is signed with a social media hashtag, “From: #ActualMuslims” and it cites a verse from the Quran which says, “Life is sacred.”

“A group of American-Muslim professionals organized like-minded concerned Muslims to raise funds for this campaign,” Mohammad Siddiqi, executive director of Sound Vision, said in a statement.

Leena Suleiman of Sound Vision said about 60 donors had pitched in. She told the local NBC television affiliate that the campaign stemmed from the frustration Muslim-Americans feel when a terrorist attack happens.

“It’s about shouting out, ‘ISIS does not represent me, I’m Muslim, I say the word ‘sucks,’ I’m like everyone else in my country,’” Suleiman said. “We want to scream it from a billboard.”

“Obviously Muslims know that ISIS sucks, so the main audience is people who are not Muslims,” Suleiman told NBC. “People who need to hear that Muslims are not OK with what ISIS is doing.”

She said Sound Vision is planning to expand the “ISIS sucks” campaign to other major cities.